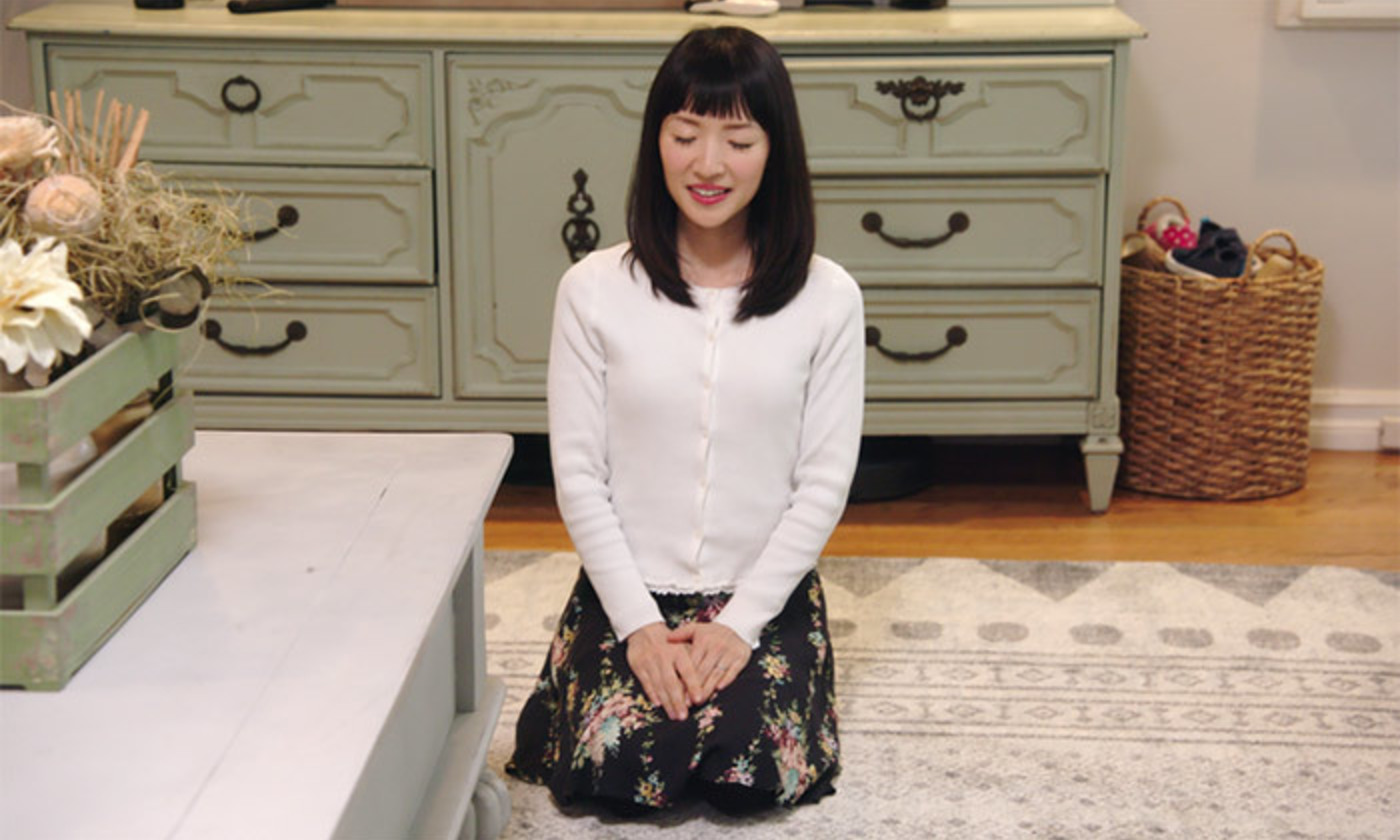 Inspired by an episode of Tidying Up with Marie Kondo on Netflix, I cleaned my dresser drawers this weekend. It was a generally satisfying way to shirk work duties (the reason I watched Netflix in the first place). Yet, despite my neater bureau, I find the popularity of Kondo’s ‘tidying’ unbearable. We are awash in stuff, and apparently so joyless that the promise of joy through house-cleaning appeals to us. The cultural fascination sparked by Kondo strikes me as deeply disordered.

As a scholar of East Asian philosophies, one pattern in the Kondo mania is all too familiar: the susceptibility of Americans to plain good sense if it can but be infused with a quasi-mystical ‘oriental’ aura. Kondo is, in several ways, a Mr Miyagi for the anxious, late-capitalist, consumerist age. Unlike the Karate Kid, we are bedevilled by our own belongings rather than by bullies – but just as Mr Miyagi could make waxing cars a way to find one’s strength and mettle, so too Marie Kondo can magically render folding T-shirts into a path toward personal contentment or even joy. The process by which mundane activities transmute into improved wellbeing is mysterious, but the mystery is much of the allure, part of what makes pedestrian wisdom palatable. Folding clothes as an organisational strategy is boring. But folding clothes as a mystically infused plan of life is alluring. It’s not about the clothes. It’s about everything, all at once.

Popular uses of East Asian philosophies often tend this way: toward making the circumscribed expansive, toward making small wisdoms carry water for all the wisdom. This is how the ancient military theorist Sun Tzu might end up guiding your retirement savings, coaching your kid’s football team, improving your marriage, or even raising your kids. Sun Tzu’s Art of War has been leveraged into self-help advice on all of these subjects and more. Superficially, and also for trained scholars of early Chinese military history, it might seem that Sun Tzu is in fact only really interested in managing violent conflict well. But at a deeper level – which is to say, at the level of what might be marketed to gullible Western consumers – he is actually addressing all of life’s mysteries. What reads like straightforward instruction on wartime espionage might yet have something to teach us about our children. To access this deeper meaning, we need to assume that ‘oriental’ wisdom is never about this or that, but always about everything. And importantly, at root, it is reassuring.

Worse than the bizarre uses of Sun Tzu are the seemingly endless heartwarming and encouraging things that Confucius is claimed to have said. Blandly inspirational Confucius memes are now so numerous and so detached from reality that they have spawned a meta-meme, one that reads: ‘Confucius: I never said all that shit.’ Most of the memes detailing what Confucius ‘said’ say little that is compelling or even mildly interesting. But that is exactly why it’s so important to append ‘Confucius said’ to them. Without this addendum, bracing us to receive a bit of ‘Eastern wisdom’, we might believe them to be yet more dull mini-homilies. Which, to be clear, they are. Poor old Confucius features in these memes as a mystical oriental kitten, telling us all to hang in there!

At a practical level, as a professor who regularly teaches East Asian philosophies, I die a little inside every time we experience a cultural phenomenon with a veneer of ‘wisdom from the East’ on it. Having imbibed pop culture’s mystical Orient, students will arrive to my classes craving a deeper initiation into Eastern mysteries. Teaching these seekers of wisdom then becomes deflationary.

I was once at an art fair where there was a booth selling temporary tattoos. One of the tattoos was a Chinese character that was translated on the tattoo’s plastic label as ‘bitch’, an appealing bit of body art for the tough girls among us, I suppose. Except a far more straightforward and accurate translation of the character would be ‘prostitute’, or maybe ‘whore’.

Teaching students who fell in love with ‘Eastern philosophy’ via our culture’s myriad Mr Miyagis is like being the one to tell someone her tattoo says ‘whore’. The tattooed will be better off knowing, but she won’t thank you for telling her. Pop-culture-induced orientalism usually does wash off, but the cleanup is far less alluring than wearing the myth. At least, I console myself, Kondo’s target market is the middle-aged, so maybe my young college students won’t show up with this particular ‘tattoo’.

In some ways, I admire the impulse to reach outside familiar cultural traditions in order seek wisdom, or even household aesthetic advice. Both the urge to improve ourselves and the curiosity to look beyond our own boundaries seem salutary. The problem, though, is when doing so looks like one more iteration of what started our troubles in the first place. The distracted impulse to acquire the new and shiny, as well as the desperate hope that novelty might alleviate anhedonic consumerist malaise – these are why Kondo’s clients have houses overwhelmed with stuff. We have homes joylessly cluttered by the artefacts of a fruitless search for joy, or at least a reprieve from bathetic numbness. And wisdom from the ‘East’ has long been marketed to Westerners hoping to escape their existential maladies by seeking what is exotic, what promises to be more meaningful than what they have or can find locally.

My cynical concerns, to be sure, are not about Kondo herself. I assume that she is sincere in what she offers, and indeed I expect some might find her counsel truly useful. It is the nature of her attraction to Westerners that gives me pause. This registers most powerfully for me when I re-imagine what she offers in a distinctly American guise. Before I became a professor, I sometimes earned my keep as a maid. And this class-conscious part of me is more oppositional still where the fascinations of ‘tidying’ are concerned.

In more fanciful moments, I think about decluttering the KonMari method itself, stripping it of the middle-class respectability its exoticism confers. In place of Kondo herself, I imagine a tired maid (maids are always tired) using her years of ‘tidying’ to counsel a family on managing their too-abundant stuff. She appeals to her experience both in cleaning and in life – invoking, say, that time she had to downsize from a double-wide trailer to a single-wide. (Long before the ‘tiny house movement’ – another pop-culture fascination for those suffocated by their own stuff – many people already lived in tiny homes, and these are called trailers.) My sage maid uses her organisational competency, hard-earned from years of picking up after others, and her long practice in the art of making do without the new or the shiny. Most of all, she is full of plain good sense. But what she will not promise, cannot promise, is that cleaning house will bring you contentment. Nor will she suggest that you discard belongings that don’t ‘spark joy’. And that really is the rub.

My wise maid will forgo soft talk of joy, and use instead a harder, plain-speaking language to assess all that stuff: does it still have use in it? Most of it probably does, and what does not was probably pretty useless to begin with. After all, usefulness is not the prime criterion for many people’s buying habits. But finding that you have a house overstuffed with things useful but never used would promise its own kind of wisdom. It won’t spark joy to see it, but then the quest to find joy in all that stuff was never a good strategy to begin with. This, too, is about everything all at once.

aeon.co
Beauty and aesthetics Home Comparative philosophy
18 February, 2019
Republish for free
Aeon is not-for-profit
and free for everyone
Make a donation
Get Aeon straight
to your inbox
Join our newsletter
Video/
Biography and memoir
‘I feel the weight of everyone’: Keeth Smart foiled death to make it to the Olympics

Essay/
Nature and landscape
A place of silence

Our cities are filled by the hubbub of human-made noise. Where shall we find the quietness we need to nurture our spirit?

Video/
Subcultures
Being a stand-up comedian is hard. It’s even harder when it’s against your religion