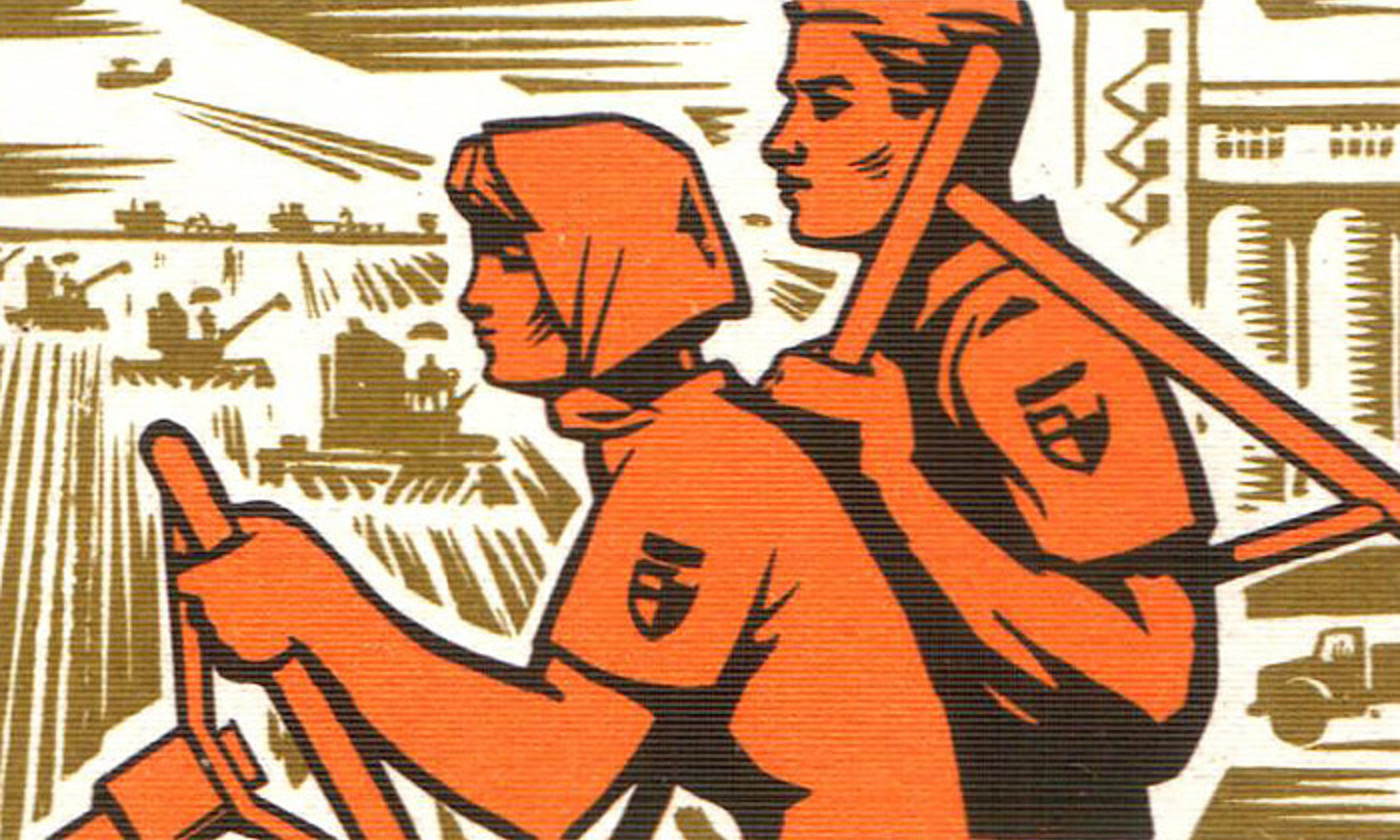 is associate professor of American studies at University of Texas, Austin. Her latest book is American Girls in Red Russia: Chasing the Soviet Dream (2017). She lives in Austin.

In the summer of 1922, Ruth Epperson Kennell, a children’s librarian, left New York City for the far reaches of Siberia. She travelled with her husband Frank and 132 other ‘pioneers’. In Siberia, they joined the Kuzbas colony, a utopian commune in the coal-mining town of Kemerovo, founded by ‘Big Bill’ Haywood, a leading Wobbly (Industrial Worker of the World) who had jumped bail in the United States and escaped to Russia. Haywood and hundreds of other foreigners were eagerly establishing industrial and agricultural communes to aid the ‘new Russia’. Kennell claimed that the Kuzbas pioneers – re-enacting American settlement of the West and industrial development on a new frontier – were building, not a new Atlantis, but a ‘new Pennsylvania’.

In signing a two-year contract with the Society for Technical Aid to Soviet Russia, and leaving the comforts of middle-class life in the US, Kennell made a decision that was surprisingly popular. An article in the radical Liberator by the proletarian bard Mike Gold, headlined “Wanted: Pioneers for Siberia,” provided the spark that set the Kennells’ life in a new direction. It also gestured toward the attractions of a broader exodus that was not just about escaping the US: these pioneers wanted a part in the building of something new. This was especially the case for US women at a moment in which they’d gained the vote but otherwise nothing had really changed for them. Appealing to ‘the Young Intellectuals who have not fled to the boulevard cafés of Paris, there to sip cocktails in a sort of noble protest against American Puritanism’, Gold’s article convinced the Kennells to pack up their worldly goods and leave their 18-month-old son in California with his paternal grandmother.

Although more men than women volunteered their services to Russia in its early years – and many of the women who did come were simply accompanying husbands – Kennell was among those who went to Russia not as dependent wives but as workers. Indeed, what made the Kuzbas enterprise appealing to her was the chance to escape what Lenin had described as the ‘crushing drudgery’ of housework, by living communally.

Kennell also, it turns out, craved freedom from bourgeois morality, and found herself increasingly drawn to an engineer from New York who she met in the colony office. When her husband departed in a dispute between Wobblies and Communists, Kennell felt relieved rather than sorry. As she noted in the popular satirical magazine American Mercury: ‘In the spring of 1925, more than one matrimonial partnership melted, usually on the wife’s initiative. The colony women found in Siberia the freedom their souls craved.’

Kennell was among the hundreds of American women who looked to revolutionary Russia as they tried to imagine a new way of being in the world. Prior to the Bolshevik Revolution, suffragists, settlement house workers, prison reformers, muckrakers and other ‘New Women’ concerned about social justice, joined the struggle for ‘Russian freedom’. Many saw the effort to liberate ‘darkest Russia’ as universal in its significance. Long viewed as a kind of ‘dark double’ to the US (with a similarly ‘unsettled’ frontier, and a tradition of serfdom terminated at almost the same moment that American slavery was abolished), the Czarist regime seemed to epitomise an age-old dynamic of a wealthy few brutally oppressing the masses. Lillian Wald and other settlement workers wrote admiringly of the ‘tender’ revolutionary women in Russia whose hatred of injustice drove them to take up arms against their government. After the successful revolution, New Women in the US regarded with approval Soviet attempts to socialise housework through public laundries, dining halls and nurseries. They celebrated the new ideal of ‘comradely love’. And they praised laws granting women the vote, legalising abortion, simplifying divorce and mandating equal pay.

By the late 1920s, every year saw hundreds of ‘American girls’ – relief workers, journalists, performers, educators, artists and adventurers – ‘barging into the Red capital’ to witness and take part in the ‘new life’. The celebrated dancer Isadora Duncan arrived in Moscow in 1921 to start a dance school, eager to see if there was ‘one country in the world that does not worship commercialism more than the mental and physical education of its children’. The photographer Margaret Bourke-White made the first of several trips to the Soviet Union in 1930, determined to document Russia’s industrial progress, declaring: ‘Things are happening in Russia, and happening with staggering speed … the effort of 150,000,000 people is so gigantic, so unprecedented in all history.’ And 22 African-American women and men, including notable Harlem Renaissance figures such as Dorothy West and Langston Hughes, travelled to Moscow in 1932 to act in a film showing ‘the first authentic picture of [American] Negro life’. The film was never made, but most members of the group – several staying on permanently – found much to admire in the Soviet Union.

Why has fascination with revolutionary Russia, particularly among women, been forgotten? Part of the answer lies in the fact that the ‘Soviet dream’ became a nightmare for many, including the unlucky Americans who tried to live out their lives there, optimistically (and sometimes accidentally) giving up their US citizenship and then finding themselves trapped: some wound up in the gulag or died, and nearly all who stayed lost the idealism that initially drew them there. For the many who stayed for several years or months – that is, long enough to feel like they were more than just tourists, but short enough to feel like their own fate was not tied up with the Soviet Union’s – it was in many cases possible, at least for a time, to rationalise violence, repression and paranoia as temporary and necessary steps on the road to building true socialism.

By the late 1930s, it had become hard to argue this; with the coming of the Cold War it became almost impossible. Today, a ‘new cold war’ is the inevitable lens for assessing the Russian ‘chapter’ in US feminism. For a feminist movement that has always been under siege, the story of ‘American Girls in Red Russia’ does not represent a usable past in a political sense. That Kennell remained loyal to the Soviet Union until her death in 1977 is not a reason to admire her. But this chapter is indeed usable in the sense that it allows us to understand something about human desire and fallibility, about the persistence of inequities between men and women, and of the belief that a better world is possible.

The Russian chapter in US feminism reminds us that women’s struggles to balance motherhood, domestic duties and meaningful work; their desire for fulfilling and egalitarian romantic relationships; and their hopes for building a more just society, have a long and richly textured history. Today, as Right-wing politicians and businessmen are lured by Russia’s single-minded pursuit of profit and its flagrant displays of power, it seems an opportune moment to remember that country’s quite different attractions in an earlier era.

is associate professor of American studies at University of Texas, Austin. Her latest book is American Girls in Red Russia: Chasing the Soviet Dream (2017). She lives in Austin.

aeon.co
History Politics and government Values and beliefs
6 July 2017
Republish for free
Aeon is not-for-profit
and free for everyone
Make a donation
Get Aeon straight
to your inbox
Join our newsletter
Video/
History of ideas
From imbalanced humours to brain chemistry – on the evolution of melancholy