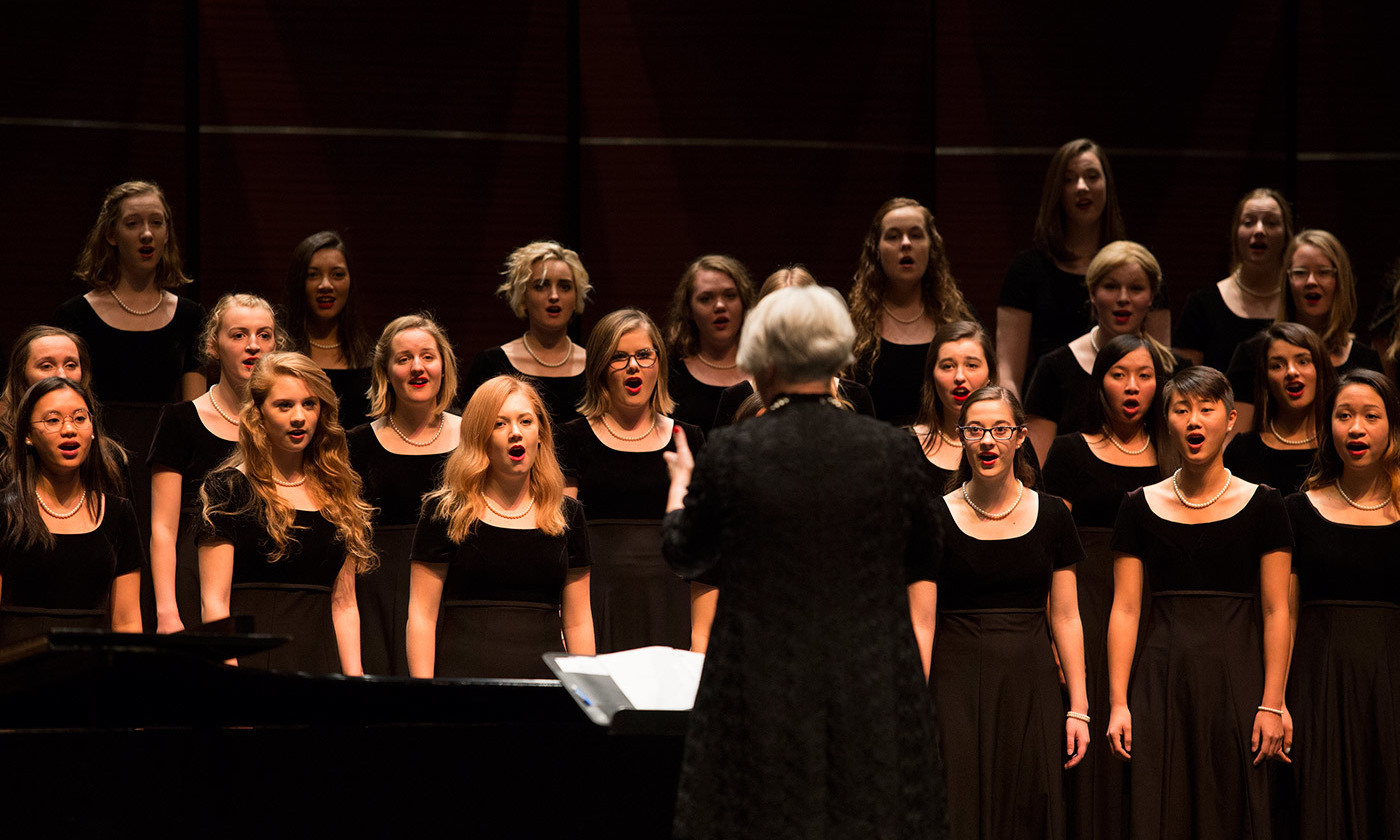 is a postdoctoral research associate in experimental psychology at the University of Oxford. She is interested in the evolution of human organisation, and her work has been published in Psychology of Music and Arts & Health, among others.

In Bohemian Rhapsody (2018), the movie about the British band Queen, the scene that sticks in my mind depicts the Live Aid concert in London in 1985. Queen belt out their best-loved songs and the crowd is singing along, swaying, clapping and stamping its feet. I could empathise a potent sense of togetherness in the audience, a feeling of cohesion between thousands of fans, coming not only from a shared enjoyment of watching the band but, more importantly, from being part of the music-making. It’s no wonder that the film shows the Live Aid donations start to climb during this set: we know that social bonding is associated with more prosocial behaviour. As a researcher, I am interested in how and why this sense of solidity from singing comes about.

Singing is universal. It is found in all cultures and, despite protestations of tone deafness, the vast majority of people can sing. Singing also often occurs in collective contexts: think about sports stadiums, religious services and birthday celebrations. Given these two characteristics, my colleagues and I wondered whether singing is a behaviour that evolved to bond groups together.

Being part of a group is essential to human survival. In our hunter-gatherer past, having supportive social relationships would have enabled people to get the resources they needed to defend them against outsiders, to benefit from collective childrearing, and to share and develop cultural knowledge about their environment and about useful technological inventions. We now also know that feeling sufficiently socially connected guards against physical and mental illness, and increases longevity.

The trouble is that human social groups are much larger than those of our primate relatives. Whereas monkeys and apes create social bonds through one-to-one grooming sessions, human groups are too large to be able to do that and still have enough time to eat and sleep. We needed a more efficient mechanism of creating social cohesion, a way to bond larger numbers of individuals together simultaneously.

To find out whether singing might fill this role, we needed to find out if this activity was capable of making large groups of individuals feel closer to each other. To help us answer this question, we teamed up with Popchoir, a British organisation that runs local choirs across London and beyond. What is great about Popchoir is that these different local choirs of a few dozen members periodically come together to create a unified ‘Megachoir’ of several hundred members. Our research team went along to some rehearsals to collect data before and after they sang together, either in their local choir or in the amalgamated Megachoir. The team included Daniel Weinstein and Lauren Stewart at Goldsmiths, University of London, Robin Dunbar at the University of Oxford and Jacques Launay at Brunel University in London, and we found that, on average, people showed a significantly bigger increase in how close they felt to the Megachoir over the course of singing with them, compared with when they were singing with their local choir.

This was because, before singing together, people felt closer to their usual choir than to the Megachoir. This makes sense: the Megachoir was mainly made up of people they had never met before. However, after singing together, people felt equally close to both their familiar, local choir and to the larger, less familiar Megachoir. So singing can create cohesion in large groups of several hundred individuals, supporting the idea that this behaviour might have evolved to create community cohesion in humans.

What we still didn’t know, however, was whether singing itself is special, or whether any activity that provided opportunities for social engagement could have similar bonding effects. To tackle this issue, we collaborated with the Workers’ Educational Association (WEA), a national adult-education charity in the UK. We predicted that singing classes would become more closely bonded than other types of classes (either creative writing or crafts). We were wrong: at the end of the seven-month courses, all the classes were equally bonded. But as we looked more closely at the data, we saw something that surprised us. Singing seemed to bond the newly formed groups much more quickly than the comparison activities. It was the most effective. So singing is special: it has an ice-breaker effect.

Although singing often takes place in a collaborative context such as a religious service, it can also take on a more competitive vibe, for example, when supporters of opposing sports teams try to outdo each other with their anthems. We wanted to see what effect this might have on the social bonding effects of singing, and to do so we collected data in a fraternity-like social club at a major European university. This club is made up of formalised ‘cliques’, each of which has its own name and dress code. These cliques compete with each other on various ranking systems such as frequency of attendance at club events, and have sing-offs and dance-offs to win prized positions in the club bar. We asked students participating in our study to sing as loudly as possible in small groups of four, either with another group of four from the same clique, or with a group of four from a different clique.

When the groups were from the same clique, cooperative singing had no effect: they were already strongly bonded so there was no way to increase their closeness. However, if members of the same clique sang competitively against each other, this actually decreased their feelings of closeness.

Where things got especially interesting was when the two singing groups were from different cliques. We found that cooperative singing significantly increased their feelings of closeness to the group from the other clique. But we were startled to see that competitive singing did this too. In other words, singing with less familiar individuals created stronger social bonds, even when they were competing. The ice-breaker effect again.

What creates this effect? At the moment we don’t really know, but we can take some guesses. In nonhuman primates, grooming facilitates social bonding through the release of endorphins, which counteract pain and give you a buzz. From recent PET-scanning work, we also know that social touch by a romantic partner is associated with endorphin release in humans. But what about behaviours that might allow simultaneous bonding of groups? Well, activities such as social laughter and synchronous dance seem to be associated with endorphin release, and the same goes for singing. The coordination of breathing required in singing, and the muscular effort involved in this synchronous activity, is likely to play a key role in this. Consequently, these behaviours might have piggybacked on the endorphin-bonding systems associated with grooming, but allow the bonding of greater numbers of individuals at once.

Another possible difference between these endorphin-releasing behaviours might be the size of group that can bond simultaneously. Conversation groups seems to have a size limit of around four speakers before splitting into subgroups. And given that laughter often occurs in natural conversation groupings (outside of the fairly recent phenomenon of stand-up comics who fill stadiums), this might mean that laughter is best-suited to small-group bonding. In contrast, singing can bond hundreds of individuals at the same time – and this can stretch into the thousands when there is a focal point keeping everyone together, for example, a band such as Queen.

We still don’t know whether it is the act of singing per se that has this effect, for example through stimulating endorphin release via coordinated muscular effort, or whether it is the shared goal of producing music that creates the cohesion. We also don’t know whether it is coordinated rhythm that stimulates the bonding effect, or whether the increased coordination required for producing harmony ramps it up. But whatever the case, part of the success of a band like Queen is that, by encouraging audience participation in its music, it successfully taps into an evolutionary mechanism of potent social bonding that creates strong connections quickly with large numbers of people from all around the world.

is a postdoctoral research associate in experimental psychology at the University of Oxford. She is interested in the evolution of human organisation, and her work has been published in Psychology of Music and Arts & Health, among others.

aeon.co
Social psychology Music Mood and emotion
21 June, 2019
Republish for free
Aeon is not-for-profit
and free for everyone
Make a donation
Get Aeon straight
to your inbox
Join our newsletter
Video/
Subcultures
Being a stand-up comedian is hard. It’s even harder when it’s against your religion