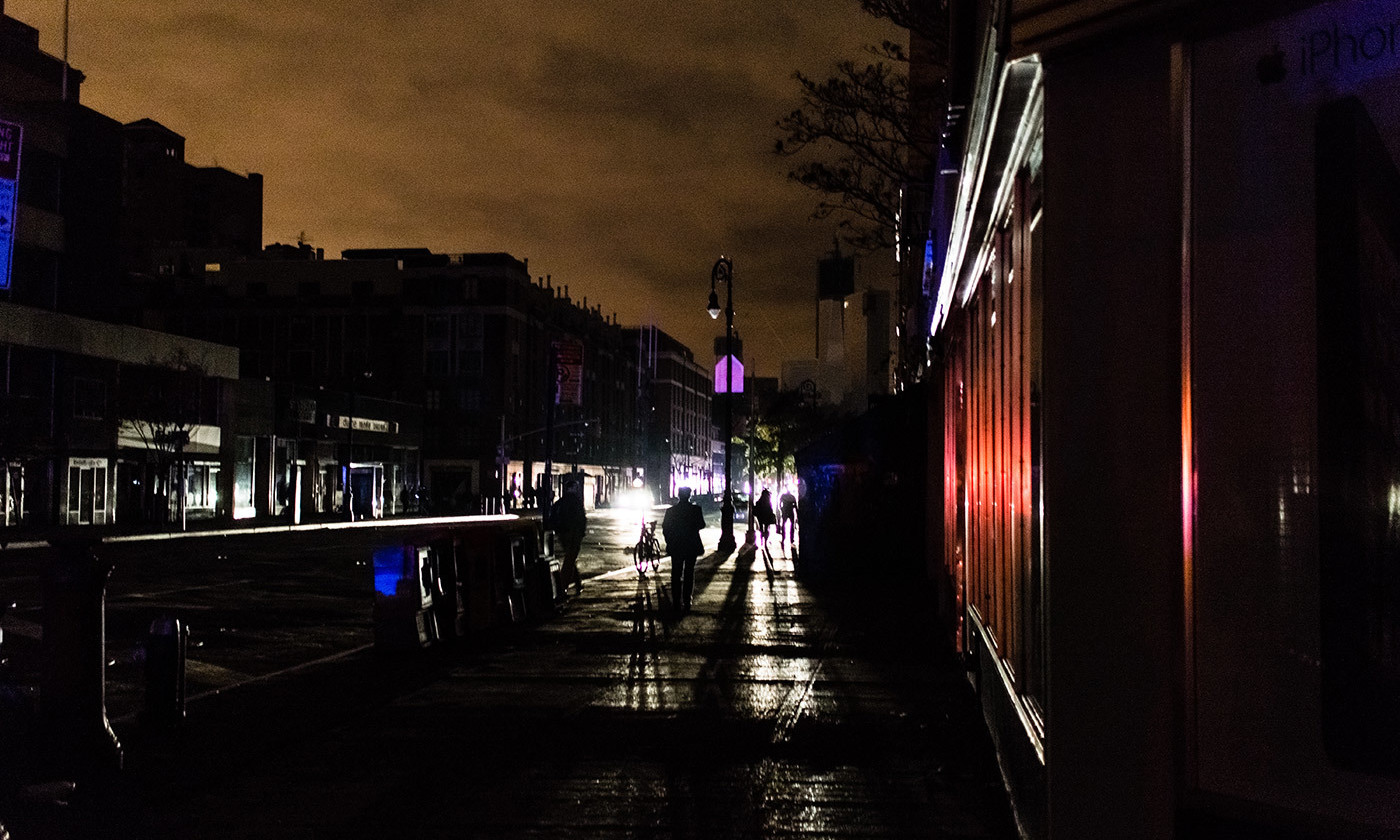 serves as a strategic and behavioural consultant working on the development of a coordinated national response to the imminent threat of EMP, pandemic and related extreme disaster scenarios. He is an emergency response incident commander with CDS, in Houston, Texas, serves on the board of advisors of Deasil Cognitive and is a member of the EMP Special Interest Group in Infragard, a partnership between the FBI and the private sector focused on critical infrastructure protection.

You might find your car dying on the freeway while other vehicles around you lose control and crash. You might see the lights going out in your city, or glimpse an airplane falling out of the sky. You’ve been in a blackout before but this one is different.

In critical facilities across the country, experts predict that it is only a matter of time before the electrical infrastructure holding society together undergoes catastrophic failure. According to the most recent report of the United States Congressional Commission appointed to assess the risk, published July 2017, we face the threat of ‘long-lasting disruption and damage’ to everything from power and clean water to electronic banking, first-responder services and functioning hospitals. Until now, such a dire prediction has typically been associated with only the most extreme doomsday true believers but William Graham, the former chairman of the Congressional Electromagnetic Pulse (EMP) Commission, says that in this case they could be right.

In the broadest sense, an EMP is a sudden burst of extreme electromagnetic interference that causes systems using electricity – especially devices controlled by chips or computers – to fail when the load gets too high. EMPs come in three basic varieties, including a ground-level or high-altitude EMP (HEMP) released by a nuclear burst that could potentially impact power lines, transformers and other critical devices; drive-by EMPs created by high-powered microwave weapons that could silently incapacitate equipment from hundreds of yards away; and coronal mass ejections (CMEs) resulting from solar storms that could interfere with the magnetic sphere surrounding the Earth, bringing down the grid that powers the electronic devices defining our contemporary way of life. According to the 2017 report, Russia, China and North Korea could already have these weapons under wraps. And CMEs from solar storms are like metaphorical magnetic earthquakes: they vary in intensity from relatively harmless ripples all the way to a potential Big One that could take down a nation’s grid within minutes, creating widespread destruction that would take years to repair.

In the most widespread and catastrophic EMP scenario, even motorised vehicles that aren’t damaged will be impacted by the lack of functioning fuel stations as gasoline stops flowing to and from the pumps. With regular deliveries interrupted by the lack of fuel and power, major urban populations will confront empty grocery shelves and a complete breakdown in essential services – from firefighting to garbage collection – in a matter of days.

Like an earthquake, the extent and nature of the damage from an EMP will depend on its intensity and location, as well as its altitude and range. The more intense and higher-altitude the pulse, the more widespread the likely damage, with some bursts more likely to damage long electrical and telephone lines and transformers, and others extending their impact to localised electronic devices and systems. But EMPs do not necessarily behave in ways that are entirely predictable. For example, a local, ground-level EMP burst could enter the underground grid and travel, potentially damaging a crucial transformer and other equipment kilometres away.

The technology that creates the interwoven fabric of our modern lives also makes us vulnerable to the reverberating impact of any potential interruption. The 1965 Northeast Blackout that left 30 million people without power occurred because a transmission line relay was improperly set. The 2003 Northeast Blackout, affecting 50 million people, was reportedly tripped by a single point of failure when a tree branch touched a powerline. The 1977 New York City blackout was caused by two circuit breakers tripping when lightning struck a substation. There are many similar examples, but suffice to say a nuclear-triggered EMP would cause millions of critical failure points across the system. As the EMP Commission concluded in 2004, even low-yield nuclear weapons detonated at an altitude of 30 kilometres could create extensive damage, while a detonation at 300 kilometres could affect the entire continental US and have a catastrophic impact on the nation.

In behind-the-scenes emergency meetings and discussions taking place among informed government and private industry experts in infrastructure-related engineering, information technology, pandemic outbreaks, law-enforcement, logistics, psychology and other relevant disciplines, our conversations are less about whether such a scenario will ever happen than about when – and how bad it will be. If we’re lucky, the coming meltdown might be less than apocalyptic. It might be far off enough that we will still have time to mitigate the worst possible impact. But more likely than not, the disaster will be on us before we can fully prepare. The more we can do in each community right now, the more able we will be to help ourselves and our neighbours. It could happen as quickly as switching off the lights.

It is one thing to confront a major disaster such as a wildfire, hurricane, earthquake or flood, and be able to mobilise critical regional resources to converge on the crisis. Such disasters benefit from a phenomenon referred to as the ‘edge effect’, in which neighbouring localities and states are able to provide recovery assistance. It is another to be hit by simultaneous disasters nation- or even worldwide. Imagine what will happen if the kinds of extreme Western wildfires the US has recently encountered are left to explode because there is no way to put them out. Imagine hurricanes Katrina, Sandy or Michael hitting landfall with no way to prepare, escape or respond.

If dehydration, starvation, disease and environmental threats don’t kill most of us relatively quickly, we are likely to turn on each other. Some recent disasters, such as the hurricanes hitting Texas and Florida, have shown people rallying together to help each other prevail. And yet we still encounter all-too-frequent examples of road rage and similar primitive behaviour, even when life is proceeding as usual.

In behind-the-scenes projections, some experts predict that if such a critical meltdown of infrastructure expands beyond regional containment, anywhere from 60 to 90 per cent of the US population will be dead within roughly the first 11 months. While that prediction might appear extreme, it could conceivably be optimistic. In his 2008 testimony to the US House of Representatives on the threat posed by an EMP attack, Graham summarised the calculation, stating:

We don’t have experience with losing the infrastructure in a country with 300 million people, most of whom don’t live in a way that provides for their own food and other needs. We can go back to an era when people did live like that…10 per cent would be 30 million people, and that is probably the range where we could survive as a basically rural economy.

Fortunately, a handful of experts are now working on practical solutions to mitigate the risk. At Instant Access Networks (IAN) near Annapolis, Maryland, the focus is on hardening critical systems against EMPs, and developing local microgrids that will function independently even in worst-case scenarios. In a point raised by my colleague and leading EMP systems integrator, Charles Manto of IAN, safeguarding even 10 per cent of the country’s critical infrastructure could potentially secure as much as 85 per cent of the economy. At Deasil Cognitive in Houston, Texas, the focus is on developing systems to parse and pattern potentially threatening communications across multiple languages and sources, in anticipation of a possible malevolent incursion, and ultimately utilising artificial intelligence and other technology to move vital data from vulnerable systems to EMP resilient backups in a hardened cloud. Other companies, such as CDS, also in Houston, Texas, are focused on providing basic emergency social, remedial and medical services. These unsung heroes and an interdisciplinary group of colleagues are working behind the scenes to develop effective methods to avert or at least help to mitigate the crisis. In the best-case scenario, these efforts will succeed and contemporary society will power on.

serves as a strategic and behavioural consultant working on the development of a coordinated national response to the imminent threat of EMP, pandemic and related extreme disaster scenarios. He is an emergency response incident commander with CDS, in Houston, Texas, serves on the board of advisors of Deasil Cognitive and is a member of the EMP Special Interest Group in Infragard, a partnership between the FBI and the private sector focused on critical infrastructure protection.

aeon.co
Future of technology The future Ecology and environmental sciences
16 April 2019
Republish for free
Aeon is not-for-profit
and free for everyone
Make a donation
Get Aeon straight
to your inbox
Join our newsletter
Video/
Archaeology
The meanings and mysteries of the iconic Sutton Hoo helmet brought vividly to life