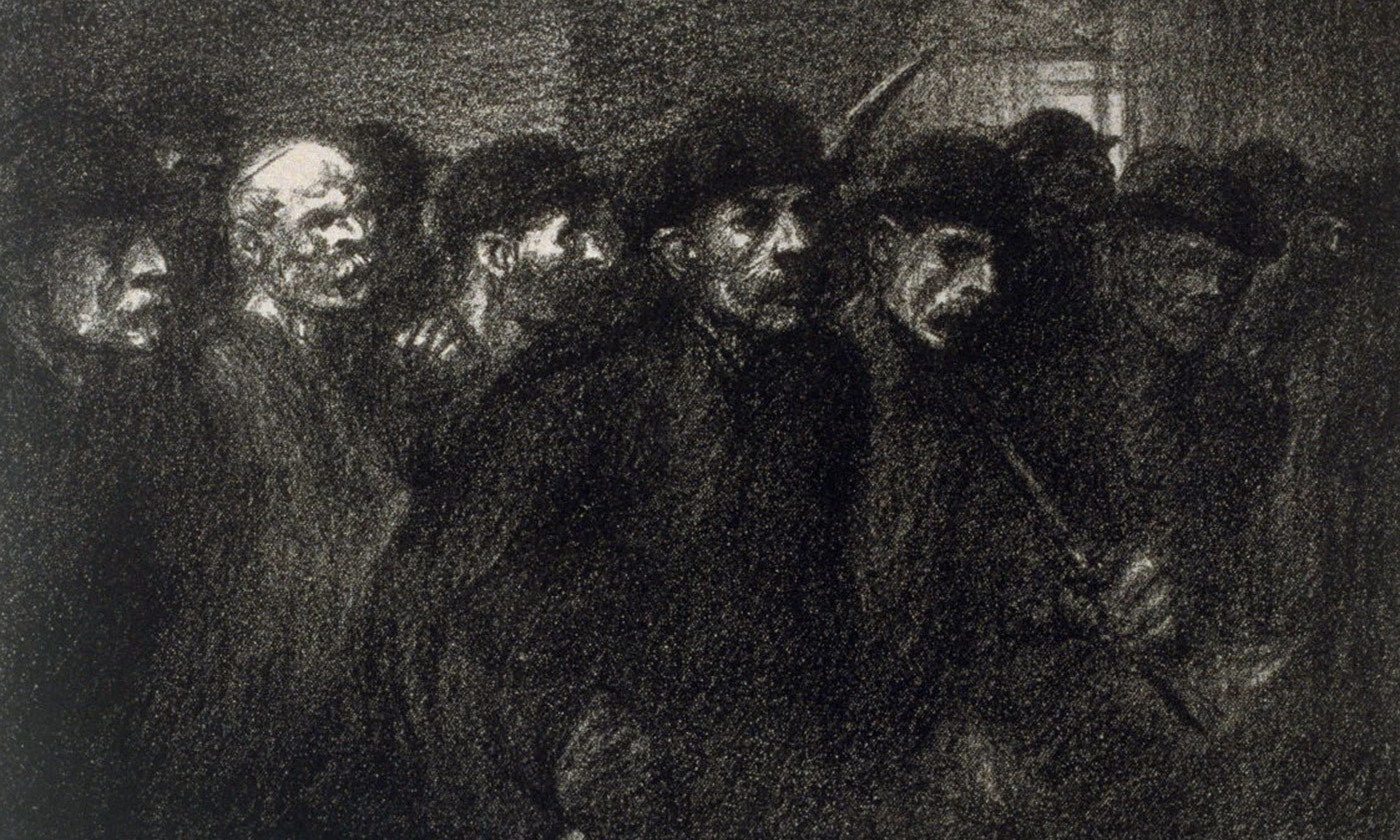 is a practical philosopher and entrepreneur. He is a faculty member at the Banff Centre in Canada, where he trains creative leaders, and at Kaospilot in Denmark, where he trains social entrepreneurs. His latest book is The Good Life and Sustaining Life (2014). He lives in Santa Fe, New Mexico.

Imagine that work had taken over the world. It would be the centre around which the rest of life turned. Then all else would come to be subservient to work. Then slowly, almost imperceptibly, anything else – the games once played, the songs hitherto sung, the loves fulfilled, the festivals celebrated – would come to resemble, and ultimately become, work. And then there would come a time, itself largely unobserved, when the many worlds that had once existed before work took over the world would vanish completely from the cultural record, having fallen into oblivion.

And how, in this world of total work, would people think and sound and act? Everywhere they looked, they would see the pre-employed, employed, post-employed, underemployed and unemployed, and there would be no one uncounted in this census. Everywhere they would laud and love work, wishing each other the very best for a productive day, opening their eyes to tasks and closing them only to sleep. Everywhere an ethos of hard work would be championed as the means by which success is to be achieved, laziness being deemed the gravest sin. Everywhere among content-providers, knowledge-brokers, collaboration architects and heads of new divisions would be heard ceaseless chatter about workflows and deltas, about plans and benchmarks, about scaling up, monetisation and growth.

In this world, eating, excreting, resting, having sex, exercising, meditating and commuting – closely monitored and ever-optimised – would all be conducive to good health, which would, in turn, be put in the service of being more and more productive. No one would drink too much, some would microdose on psychedelics to enhance their work performance, and everyone would live indefinitely long. Off in corners, rumours would occasionally circulate about death or suicide from overwork, but such faintly sweet susurrus would rightly be regarded as no more than local manifestations of the spirit of total work, for some even as a praiseworthy way of taking work to its logical limit in ultimate sacrifice. In all corners of the world, therefore, people would act in order to complete total work’s deepest longing: to see itself fully manifest.

This world, it turns out, is not a work of science fiction; it is unmistakably close to our own.

‘Total work’, a term coined by the German philosopher Josef Pieper just after the Second World War in his book Leisure: The Basis of Culture (1948), is the process by which human beings are transformed into workers and nothing else. By this means, work will ultimately become total, I argue, when it is the centre around which all of human life turns; when everything else is put in its service; when leisure, festivity and play come to resemble and then become work; when there remains no further dimension to life beyond work; when humans fully believe that we were born only to work; and when other ways of life, existing before total work won out, disappear completely from cultural memory.

We are on the verge of total work’s realisation. Each day I speak with people for whom work has come to control their lives, making their world into a task, their thoughts an unspoken burden.

For unlike someone devoted to the life of contemplation, a total worker takes herself to be primordially an agent standing before the world, which is construed as an endless set of tasks extending into the indeterminate future. Following this taskification of the world, she sees time as a scarce resource to be used prudently, is always concerned with what is to be done, and is often anxious both about whether this is the right thing to do now and about there always being more to do. Crucially, the attitude of the total worker is not grasped best in cases of overwork, but rather in the everyday way in which he is single-mindedly focused on tasks to be completed, with productivity, effectiveness and efficiency to be enhanced. How? Through the modes of effective planning, skilful prioritising and timely delegation. The total worker, in brief, is a figure of ceaseless, tensed, busied activity: a figure, whose main affliction is a deep existential restlessness fixated on producing the useful.

What is so disturbing about total work is not just that it causes needless human suffering but also that it eradicates the forms of playful contemplation concerned with our asking, pondering and answering the most basic questions of existence. To see how it causes needless human suffering, consider the illuminating phenomenology of total work as it shows up in the daily awareness of two imaginary conversation partners. There is, to begin with, constant tension, an overarching sense of pressure associated with the thought that there’s something that needs to be done, always something I’m supposed to be doing right now. As the second conversation partner puts it, there is concomitantly the looming question: Is this the best use of my time? Time, an enemy, a scarcity, reveals the agent’s limited powers of action, the pain of harrying, unanswerable opportunity costs.

Together, thoughts of the not yet but supposed to be done, the should have been done already, the could be something more productive I should be doing, and the ever-awaiting next thing to do conspire as enemies to harass the agent who is, by default, always behind in the incomplete now. Secondly, one feels guilt whenever he is not as productive as possible. Guilt, in this case, is an expression of a failure to keep up or keep on top of things, with tasks overflowing because of presumed neglect or relative idleness. Finally, the constant, haranguing impulse to get things done implies that it’s empirically impossible, from within this mode of being, to experience things completely. ‘My being,’ the first man concludes, ‘is an onus,’ which is to say an endless cycle of unsatisfactoriness.

The burden character of total work, then, is defined by ceaseless, restless, agitated activity, anxiety about the future, a sense of life being overwhelming, nagging thoughts about missed opportunities, and guilt connected to the possibility of laziness. Hence, the taskification of the world is correlated with the burden character of total work. In short, total work necessarily causes dukkha, a Buddhist term referring to the unsatisfactory nature of a life filled with suffering.

In addition to causing dukkha, total work bars access to higher levels of reality. For what is lost in the world of total work is art’s revelation of the beautiful, religion’s glimpse of eternity, love’s unalloyed joy, and philosophy’s sense of wonderment. All of these require silence, stillness, a wholehearted willingness to simply apprehend. If meaning, understood as the ludic interaction of finitude and infinity, is precisely what transcends, here and now, the ken of our preoccupations and mundane tasks, enabling us to have a direct experience with what is greater than ourselves, then what is lost in a world of total work is the very possibility of our experiencing meaning. What is lost is seeking why we’re here.

is a practical philosopher and entrepreneur. He is a faculty member at the Banff Centre in Canada, where he trains creative leaders, and at Kaospilot in Denmark, where he trains social entrepreneurs. His latest book is The Good Life and Sustaining Life (2014). He lives in Santa Fe, New Mexico.

aeon.co
Meaning and the good life Work Values and beliefs
20 December 2017
Republish for free
Aeon is not-for-profit
and free for everyone
Make a donation
Get Aeon straight
to your inbox
Join our newsletter
Video/
Anthropology
Stunning century-old footage of the Nile valley carries echoes from the ancient past