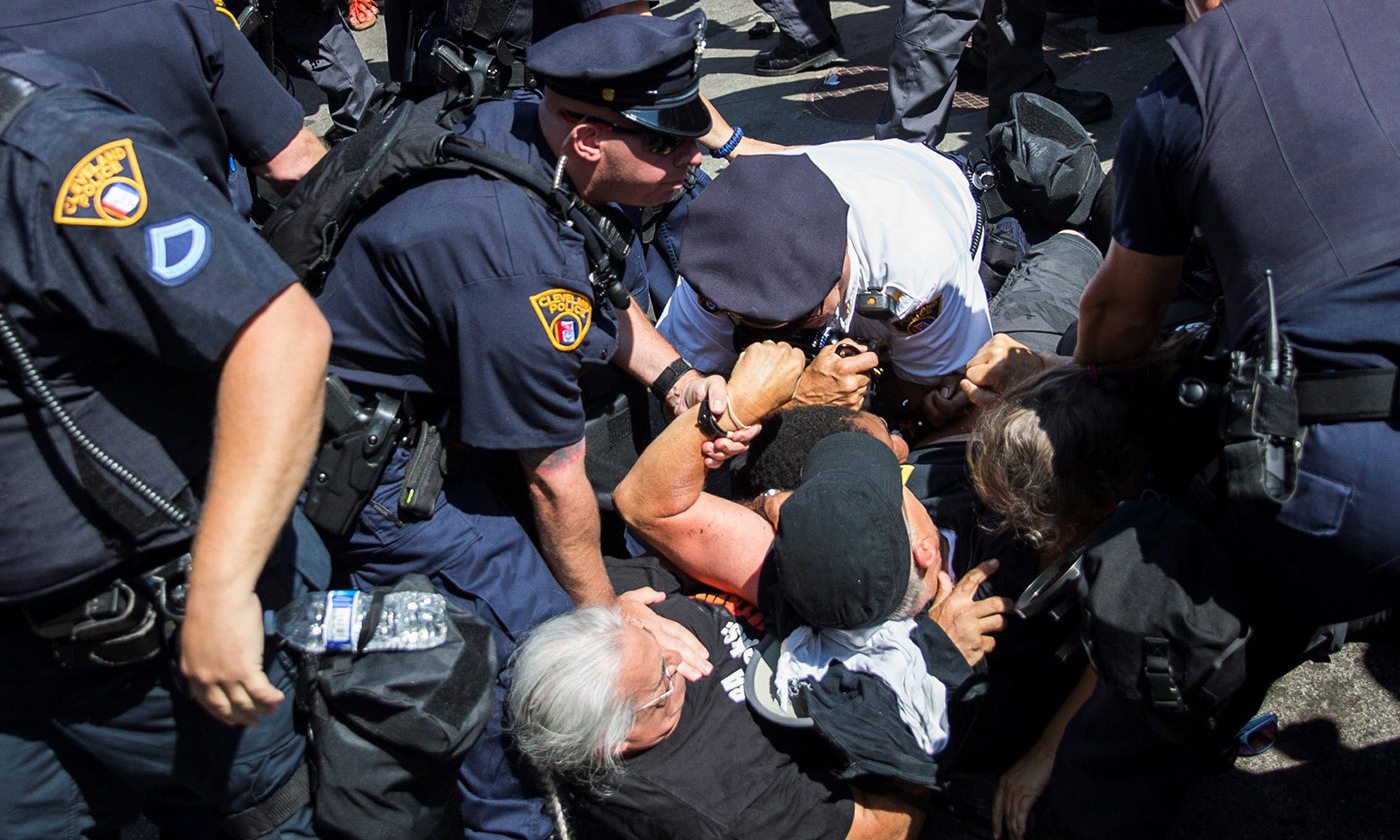 is professor of strategy, economics, ethics and public policy at Georgetown University. He is the author, together with Peter Jaworski, of Markets Without Limits (2015), and his latest book is When All Else Fails: The Ethics of Resistance to State Injustice (2018).

If you see police choking someone to death – such as Eric Garner, the 43-year-old black horticulturalist wrestled down on the streets of New York City in 2014 – you might choose to pepper-spray them and flee. You might even save an innocent life. But what ethical considerations justify such dangerous heroics? (After all, the cops might arrest or kill you.) More important: do we have the right to defend ourselves and others from government injustice when government agents are following an unjust law? I think the answer is yes. But that view needs defending. Under what circumstances might active self-defence, including possible violence, be justified, as opposed to the passive resistance of civil disobedience that Americans generally applaud?

Civil disobedience is a public act that aims to create social or legal change. Think of Henry David Thoreau’s arrest in 1846 for refusing to pay taxes to fund the colonial exploits of the United States, or Martin Luther King Jr courting the ire of the authorities in 1963 to shame white America into respecting black civil rights. In such cases, disobedient citizens visibly break the law and accept punishment, so as to draw attention to a cause. But justifiable resistance need not have a civic character. It need not aim at changing the law, reforming dysfunctional institutions or replacing bad leaders. Sometimes, it is simply about stopping an immediate injustice­. If you stop a mugging, you are trying to stop that mugging in that moment, not trying to end muggings everywhere. Indeed, had you pepper-sprayed the police officer Daniel Pantaleo while he choked Eric Garner, you’d have been trying to save Garner, not reform US policing.

Generally, we agree that it’s wrong to lie, cheat, steal, deceive, manipulate, destroy property or attack people. But few of us think that the prohibitions against such actions are absolute. Commonsense morality holds that such actions are permissible in self-defence or in defence of others (even if the law doesn’t always agree). You may lie to the murderer at the door. You may smash the windows of the would-be kidnapper’s car. You may kill the would-be rapist.

Here’s a philosophical exercise. Imagine a situation in which a civilian commits an injustice, the kind against which you believe it is permissible to use deception, subterfuge or violence to defend yourself or others. For instance, imagine your friend makes an improper stop at a red light, and his dad, in anger, yanks him out of the car, beats the hell out of him, and continues to strike the back of his skull even after your friend lies subdued and prostrate. May you use violence, if it’s necessary to stop the father? Now imagine the same scene, except this time the attacker is a police officer in Ohio, and the victim is Richard Hubbard III, who in 2017 experienced just such an attack as described. Does that change things? Must you let the police officer possibly kill Hubbard rather than intervene?

Most people answer yes, believing that we are forbidden from stopping government agents who violate our rights. I find this puzzling. On this view, my neighbours can eliminate our right of self-defence and our rights to defend others by granting someone an office or passing a bad law. On this view, our rights to life, liberty, due process and security of person can disappear by political fiat – or even when a cop has a bad day. In When All Else Fails: The Ethics of Resistance to State Injustice (2019), I argue instead that we may act defensively against government agents under the same conditions in which we may act defensively against civilians. In my view, civilian and government agents are on a par, and we have identical rights of self-defence (and defence of others) against both. We should presume, by default, that government agents have no special immunity against self-defence, unless we can discover good reason to think otherwise. But it turns out that the leading arguments for special immunity are weak.

Some people say we may not defend ourselves against government injustice because governments and their agents have ‘authority’. (By definition, a government has authority over you if, and only if, it can oblige you to obey by fiat: you have to do what it says because it says so.) But the authority argument doesn’t work. It’s one thing to say that you have a duty to pay your taxes, show up for jury duty, or follow the speed limit. It is quite another to show that you are specifically bound to allow a government and its agents to use excessive violence and ignore your rights to due process. A central idea in liberalism is that whatever authority governments have is limited.

Others say that we should resist government injustice, but only through peaceful methods. Indeed, we should, but that doesn’t differentiate between self-defence against civilians or government. The common-law doctrine of self-defence is always governed by a necessity proviso: you may lie or use violence only if necessary, that is, only if peaceful actions are not as effective. But peaceful methods often fail to stop wrongdoing. Eric Garner peacefully complained: ‘I can’t breathe,’ until he drew his last breath.

Another argument is that we shouldn’t act as vigilantes. But invoking this point here misunderstands the antivigilante principle, which says that when there exists a workable public system of justice, you should defer to public agents trying, in good faith, to administer justice. So if cops attempt to stop a mugging, you shouldn’t insert yourself. But if they ignore or can’t stop a mugging, you may intervene. If the police themselves are the muggers – as in unjust civil forfeiture – the antivigilante principle does not forbid you from defending yourself. It insists you defer to more competent government agents when they administer justice, not that you must let them commit injustice.

However, this objection gets the problem exactly backwards. In real life, people are too deferential and conformist in the face of government authority. They are all-too-willing to electrocute experimental subjects, gas Jews or bomb civilians when ordered to, and reluctant to stand up to political injustice. If anything, the dangerous thesis – the thesis that most people will mistakenly misapply – is that we should defer to government agents when they seem to act unjustly. Remember, self-defence against the state is about stopping an immediate injustice, not fixing broken rules.

Of course, strategic nonviolence is usually the most effective way to induce lasting social change. But we should not assume that strategic nonviolence of the sort that King practised always works alone. Two recent books – Charles Cobb Jr’s This Nonviolent Stuff’ll Get You Killed (2014) and Akinyele Omowale Umoja’s We Will Shoot Back (2013) – show that the later ‘nonviolent’ phase of US civil rights activism succeeded (in so far as it has) only because, in earlier phases, black people armed themselves and shot back in self-defence. Once murderous mobs and white police learned that black people would fight back, they turned to less violent forms of oppression, and black people in turn began using nonviolent tactics. Defensive subterfuge, deceit and violence are rarely first resorts, but that doesn’t mean they are never justified.

When All Else Fails: The Ethics of Resistance to State Injustice (2018) by Jason Brennan is published via Princeton University Press.

is professor of strategy, economics, ethics and public policy at Georgetown University. He is the author, together with Peter Jaworski, of Markets Without Limits (2015), and his latest book is When All Else Fails: The Ethics of Resistance to State Injustice (2018).

aeon.co
Politics and government Political philosophy Ethics
03 December, 2018
Republish for free
Aeon is not-for-profit
and free for everyone
Make a donation
Get Aeon straight
to your inbox
Join our newsletter
Video/
Public health
Basic healthcare and clean needles is all in a day’s work at a roving addiction clinic