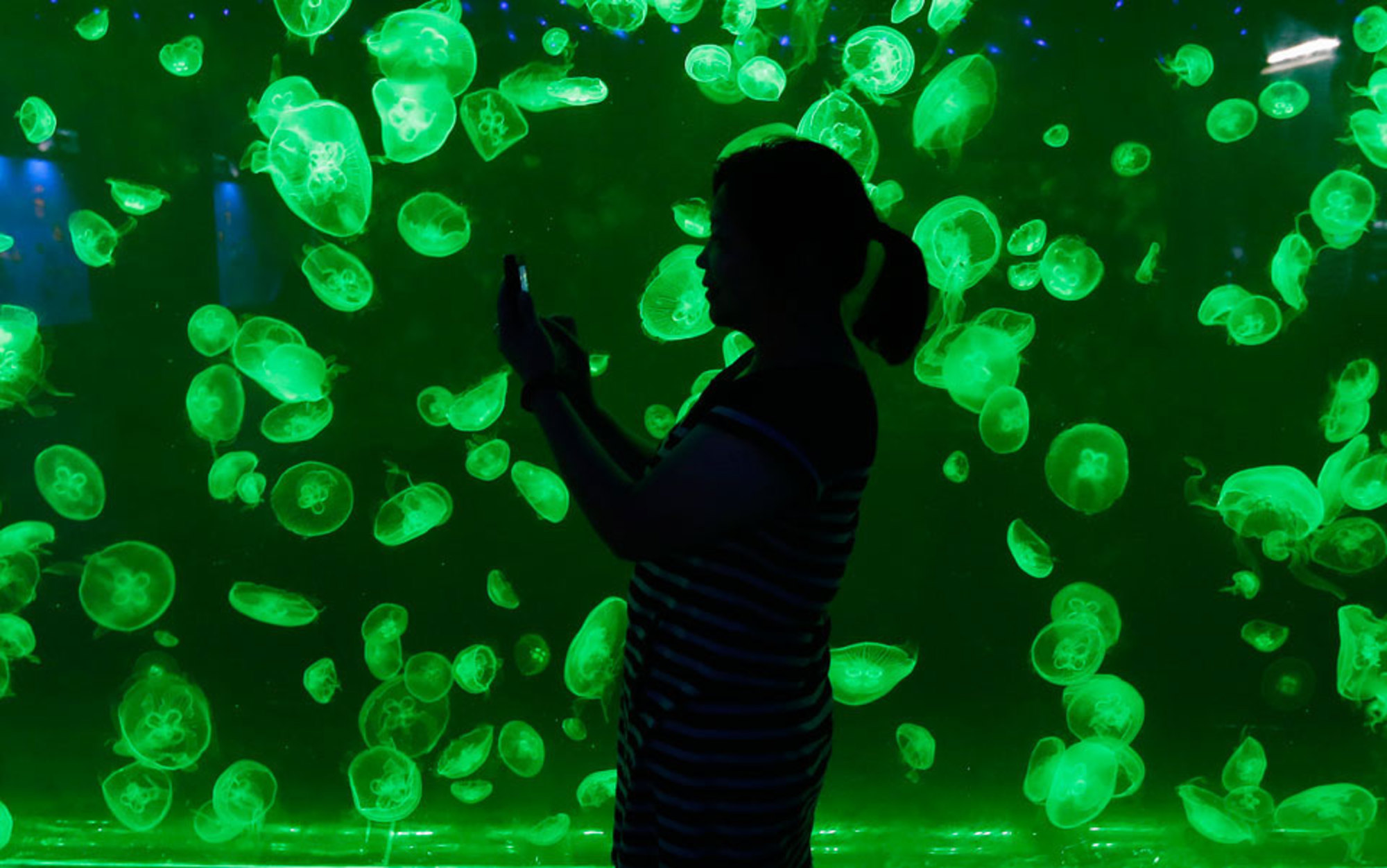 Getting back to nature: a visitor takes a photo of jellyfish in the aquarium in Wuhan, China. Photo by Reuters

We surf the net, stream our films and save stuff in the cloud. Can we get all the nature we need from the digital world?

Getting back to nature: a visitor takes a photo of jellyfish in the aquarium in Wuhan, China. Photo by Reuters

is a writer and digital pioneer. Her latest book is Technobiophilia: Nature and Cyberspace (2013).

There are fish in my phone. Some are pure orange with white fins; others have black mottled markings along their orange backs. They glide, twist and turn above a bed of flat pale sand fringed by rocks and the bright green leaves of something that looks like watercress. Sometimes they swim out of view, leaving me to gaze at the empty scene in the knowledge that they will soon reappear. When I gently press my finger against the screen, the water ripples and the fish swim away. Eventually, they cruise out from behind the Google widget, appear from underneath the Facebook icon, or sneak around the corner of Contacts. This is Koi Live Wallpaper, an app designed for smartphones. The idea of an aquarium inside my phone appeals to my sense of humour and makes me smile. But I suspect its true appeal is more complicated than that.

In 1984, the psychiatrist Aaron Katcher and his team at the University of Pennsylvania conducted an experiment in the busy waiting room of a dentist’s office. On some days, before the surgery opened, the researchers installed an aquarium with tropical fish. On other days, they took it away. They measured the patients’ levels of anxiety in both environments, and the results were clear. On ‘aquarium days’, patients were less anxious and more compliant during the surgery. Katcher concluded that the presence of these colourful living creatures had a calming influence on people about to receive dental treatment. Then in 1990, Judith Heerwagen and colleagues at the University of Washington in Seattle found the same calming effect using a large nature mural instead of an aquarium in the waiting room of a specialist ‘dental fears’ clinic. A third experiment by the environmental psychologist Roger Ulrich and colleagues at Texas A&M University in 2003 found that stressed blood donors experienced lowered blood pressure and pulse rates while sitting in a room where a videotape of a nature scene was playing. The general conclusion was that visual exposure to nature not only diminished patient stress but also reduced physical pain. I’m not in pain when I look at my mobile, though I might well be stressed. Is that why I take time to gaze at my virtual aquarium?

A simple answer to this question is no. Katcher’s fish were real. Mine are animations. But there is increasing evidence that we respond very similarly to a ‘natural’ environment, whether it’s real or virtual, and research confirms that even simulated nature experiences can be remarkably powerful. In a 2008 study of Spanish energy consumers, the researchers Patrick Hartmann and Vanessa Apaolaza-Ibáñez at the University of the Basque Country examined responses to a new TV marketing campaign by one of the country’s leading energy brands, Iberdrola Energía Verde. The company was attempting to ‘green’ its image by evoking a virtual experience of nature through the use of pleasant imagery such as flying eagles, mountain scenery, and waterfalls. The intention was to evoke feelings of altruism and self-expression (‘Now, every time you switch on your light, you can feel good because you are helping nature’). The researchers found that consumers responded positively to the new branding, no matter whether they were already environmentally conscious or among the ‘non-concerned’. The ads brought the benefits of a ‘warm glow’ and a positive feeling of participating in the common good of the environment. The visual simulations were meeting a human desire to experience nature and reap its psychological benefits (pleasure, stress reduction, and so on). The research concluded that in societies where the experience of actual nature is becoming scarce, and life is increasingly virtual, the consumption of ‘green products’, especially those that evoke virtual contact with nature, can provide surrogate experiences.

The psychologist Deltcho Valtchanov at the University of Waterloo in Canada reached a similar conclusion in 2010 when he found that immersion in a computer-generated virtual reality nature space prompted an increase in positive feelings such as happiness, friendliness, affection and playfulness, and a decrease in negative feelings such as fear, anger and sadness. There were also significant decreases in levels of both perceived and physiological stress. Again, he and his colleagues concluded that encounters with nature in virtual reality have beneficial effects similar to encounters with real natural spaces. In other words, it seems that you can gain equal benefit from walking in a forest as from viewing an image of a forest or, as in my case, from watching virtual goldfish as opposed to real ones.

But what do we mean when we refer to ‘nature’? It’s a common term that seems to have an assumed collective meaning, often romanticised and sentimental. We speak of ‘getting back to nature’ as if there was once a prelapsarian baseline before we humans interfered and spoiled it. Gary Snyder, the American poet and environmentalist, offers alternative definitions from which we can choose. In The Practice of the Wild (1990), he distils down to two ways in which the term ‘nature’ is usually interpreted. One, he argues, is the outdoors: ‘the physical world, including all living things. Nature by this definition is a norm of the world that is apart from the features or products of civilisation and human will. The machine, the artefact, the devised, or the extraordinary (like a two-headed calf) is spoken of as “unnatural”.’

The other meaning is much broader, taking the first and adding to it all the products of human action and intention. Snyder calls it the material world and all its collective objects and phenomena. ‘Science and some sorts of mysticism rightly propose that everything is natural,’ he writes. In this sense, ‘there is nothing unnatural about New York City, or toxic wastes, or atomic energy, and nothing — by definition — that we do or experience in life is “unnatural”.’ That, of course, includes the products of technology. This is Snyder’s preferred definition — and mine too. However, though it’s not always made clear, I’d venture a guess that environmental psychologists might have a preference for the former, human-free definition of nature.

Either way, it’s been claimed that the love of nature derives from ‘biophilia’, or the biophilic tendency. The term, coined in the 1960s by the German social psychologist Erich Fromm, was intended to denote a psychological orientation towards nature, but it became better known when popularised by the American biologist E O Wilson in Biophilia (1984) as an ‘innate tendency to focus on life and lifelike processes’. Note that Wilson avoids the ‘n’ word, referring to ‘life’ instead. Of course, today the digerati are deeply engaged in conversations about what ‘life’ will mean in technologies of the future, a debate that will continue for a long time to come. More recently, the concept of biophilia has been celebrated by the Icelandic musician Björk in her 2011 album and musical project of the same name.

The notion of biophilia draws upon a genetic attraction to an ancient natural world that evolved long before we did. It appears that our urge for contact with nature can, as shown in the experiments described, restore energy, alleviate mental fatigue, and enhance attention. It also appears to be surprisingly transferable to digital environments.

In 2004 I began collecting examples of metaphors and images of the natural world commonly found in computer culture — terms such as stream, cloud, virus, worm, surfing, field, and so on. I intended to find out what can be learnt from them about the intersections between human beings, cyberspace, and nature. I quickly amassed a long list of examples but found myself unable to suggest a reason for this phenomenon, until I came across Wilson’s theory. I realised that the story had been right in front of me all the time. It can be found in the images on our machines, in the spaces we cultivate in our online communities, and in the language we use every day of our digital lives. It began the moment we moved into the alien, shape-shifting territory of the internet and prompted a resurgence of that ancient call to life, biophilia.

Our attempts to place ourselves in this new world nourished the growth of a new spur, a hybrid through which nature and technology become symbionts, rather than opponents. I have coined the term ‘technobiophilia’ for this. It’s a clumsy word — probably not quite the right one — but for now it helps to spell out what is happening so that we can understand it better. Is there the possibility that perhaps biophilia can soothe our connected minds and improve our digital well-being? How can we harness and develop our technobiophilic instincts in order to live well in the digital world?

One option would be that rather than keeping the virtual and the natural worlds separate — turning off our machines, taking e-sabbaticals, or undergoing digital detoxes, in order to connect with nature — we think about them all as integrated elements of a single life in a single world. There is already a growing sense in the wired community that connections with the natural world are vital to digital well-being, both now and in the future. This same community needs to pay attention to biophilia and to its implementation in biophilic design. With the help of biophilic insights, we can connect the planet beneath our feet with the planet inside our machines. 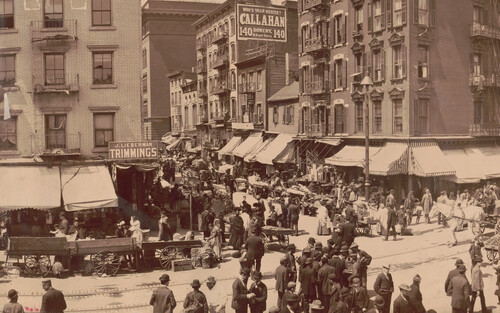 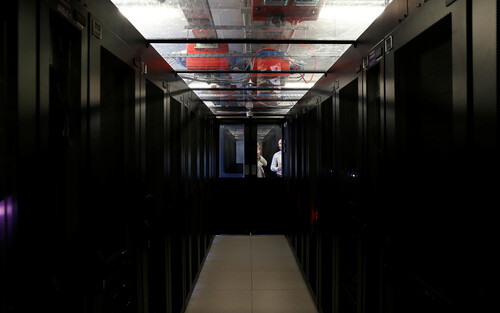