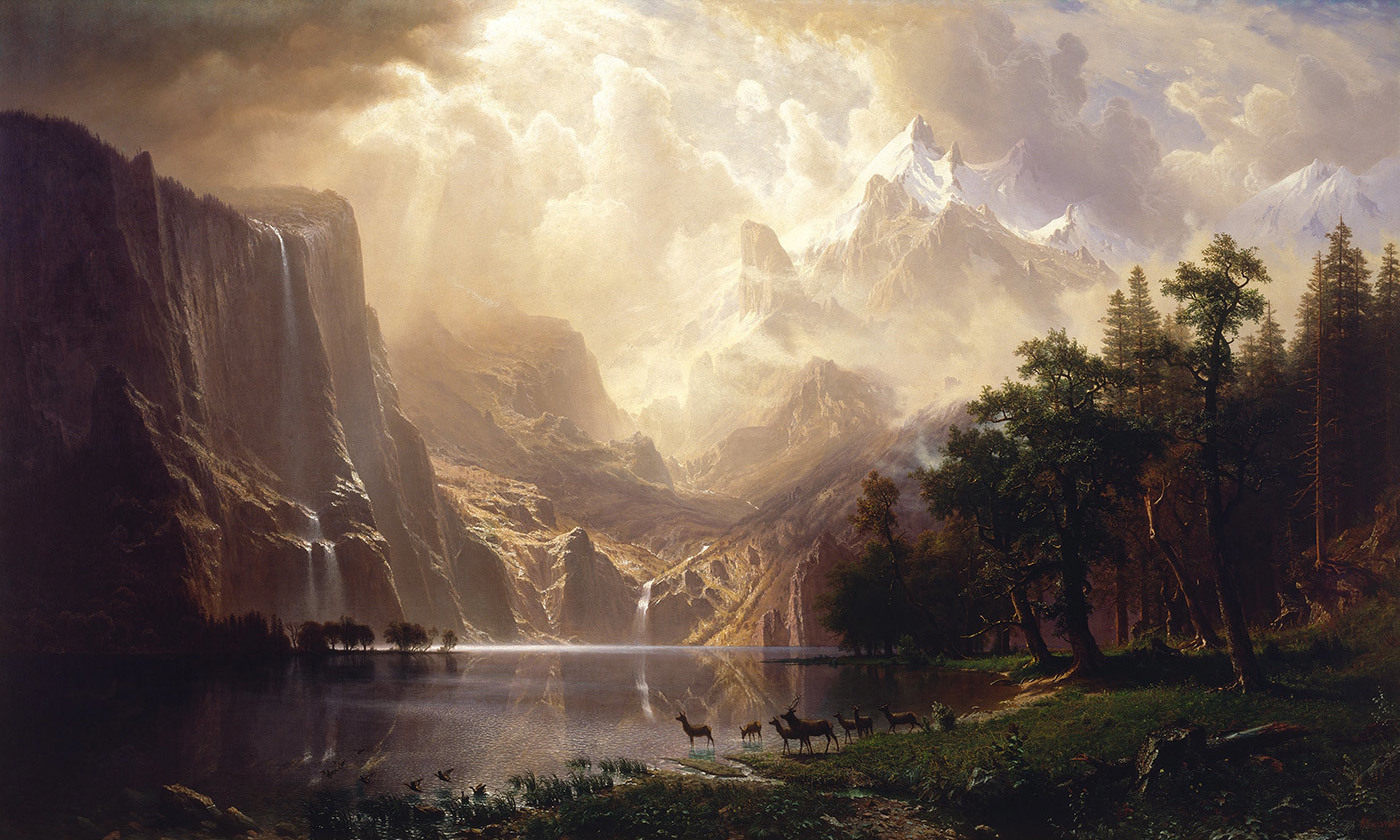 Have you ever felt awe and exhilaration while contemplating a vista of jagged, snow-capped mountains? Or been fascinated but also a bit unsettled while beholding a thunderous waterfall such as Niagara? Or felt existentially insignificant but strangely exalted while gazing up at the clear, starry night sky? If so, then you’ve had an experience of what philosophers from the mid-18th century to the present call the sublime. It is an aesthetic experience that modern, Western philosophers often theorise about, as well as, more recently, experimental psychologists and neuroscientists in the field of neuroaesthetics.

Responses to the sublime are puzzling. While the 18th century saw ‘the beautiful’ as a wholly pleasurable experience of typically delicate, harmonious, balanced, smooth and polished objects, the sublime was understood largely as its opposite: a mix of pain and pleasure, experienced in the presence of typically vast, formless, threatening, overwhelming natural environments or phenomena. Thus the philosopher Edmund Burke in 1756 describes sublime pleasure in oxymoronic terms as a ‘delightful horror’ and a ‘sort of tranquility tinged with terror’. Immanuel Kant in 1790 describes it as a ‘negative’ rather than a ‘positive pleasure’, in which ‘the mind is not merely attracted by the object, but is also always reciprocally repelled by it’. It became a problem to explain why the sublime should be experienced overall with positive affect and valued so highly, given that it was seen to also involve an element of pain. Deepening the sense of paradox is the view that the experience of the sublime is actually more profound and satisfying than that of the beautiful. Some believe such sublime aesthetic experiences constitute religious or spiritual experiences of God or a ‘numinous’ reality.

There are two kinds of response to the sublime: what I call the ‘thin’ and the ‘thick’ sublime. Burke’s physiological account understands the sublime as an immediate affective arousal, which is not a highly intellectual aesthetic response. This is the ‘thin sublime’. Kant and Arthur Schopenhauer meanwhile offer transcendental accounts – that is, accounts that involve putatively universal cognitive faculties – and understand the sublime as an emotional response in which intellectual reflection on ideas, especially ideas about humankind’s place in nature, play a significant role. This is the ‘thick sublime’.

Thin sublime, then, is akin to an immediate reaction of awe, and this bare cognitive appraisal that kind of stuns and overwhelms the appreciator might very well be the first moment in all sublime aesthetic responses. But when one lingers in that experience of awe, and the mind starts to reflect on the features of the awe-inspiring landscape or phenomenon, and the way it makes one feel, then this cognitive-affective engagement constitutes thick sublime experience.

Why do these sorts of sublime experiences matter? For Burke, the experience matters insofar as it is the ‘strongest emotion which the mind is capable of feeling’. But for Kant and Schopenhauer, the experience is profounder still. This is how Kant describes the experience and significance of what he terms the dynamically sublime (that is, an aesthetic experience of overwhelming power):

Bold, overhanging, as it were threatening cliffs, thunder clouds towering up into the heavens … make our capacity to resist into an insignificant trifle in comparison with their power. But the sight of them only becomes all the more attractive the more fearful it is, as long as we find ourselves in safety, and we gladly call these objects sublime because they elevate the strength of our soul above its usual level, and allow us to discover within ourselves a capacity for resistance of quite another kind, which gives us the courage to measure ourselves against the apparent all-powerfulness of nature. (Emphasis added.)

For Kant, this experience of the irresistibility of nature’s power prompts us to realise that we are weak and existentially insignificant in the grand scheme of nature. And yet, it also reveals that we transcend nature as moral agents and systematic knowers. Insofar as we are morally free beings capable of comprehending nature in a systematic way, we are in a sense independent of and superior to nature.

For Schopenhauer too, the objects of aesthetic contemplation in the feeling of the sublime bear ‘a hostile relation to the human will in general (as it presents itself in its objecthood, the human body) and oppose it, threatening it with a superior power that suppresses all resistance, or reducing it to nothing with its immense size’. But sublime pleasure results when a person is able to achieve calm contemplation of an object or environment despite the fact that it appears threatening to the person’s bodily or psychological wellbeing.

In an example of a high degree of the mathematically sublime (an experience of nature as vast), for example, Schopenhauer writes:

When we lose ourselves in the contemplation of the infinite extent of the world in space and time … then we feel ourselves reduced to nothing, feel ourselves as individuals, as living bodies, a transient appearances of the will, like drops in the ocean, fading away, melting away into nothing. But at the same time … our immediate consciousness [is] that all these worlds really exist only in our representation … The magnitude of the world, which we used to find unsettling, is now settled securely within ourselves … it appears only as the felt consciousness that we are, in some sense (that only philosophy makes clear), one with the world, and thus not brought down, but rather elevated, by its immensity.

Here we have an account of sublime experience that oscillates between feeling reduced to nothing in comparison with the great spatial and temporal expanse of nature, and then feeling elevated by two thoughts ‘that only philosophy makes clear’. First is the thought that as cognising, thinking subjects we in a sense create (support, construct) our own world – a second nature, as it were – a world of our own subjective experience. And the second exalting thought is that we are in some sense ‘one with the world’, and in being unified with nature in all its temporal and spatial vastness, we are therefore ‘not oppressed but exalted by its immensity.’

The source of the pleasure in sublime experiences derives, according to Kant, from an appreciation of our capacity for moral and theoretical transcendence of mere nature, and, in Schopenhauer, from a reflection on the two-fold nature of our selves. On the one hand, we have power as cognising subjects – we are creators of a world, a world of subjective experience; and on the other hand, the experience reveals in an intuitive fashion that we are at bottom really unified with all of nature. Nature’s immensity is our immensity; its seeming infinity is our infinity too.

Are such accounts as those offered by Kant and Schopenhauer relics of a more metaphysical age? No. Our best science does not demystify our awe at the starry night sky or a wide expanse of ocean. Nor does science render environments such as volcanic mountains, storms at sea, powerful cascades or expanses of desert nonthreatening. Scientific understanding deepens our sense of awe and wonder at these environments and phenomena, and our human nature within and relative to them. As we attend to these awe-inspiring and/or physically threatening kinds of places aesthetically – that is, if we pay attention to these environments for their own sake and with a kind of appreciative distance – they are liable to spark a play of ideas about the human place within, and powers relative to, nature.

Such thoughts are both natural to human beings and scientifically respectable. They constitute for some a paradoxical feeling of being at once unified with and not at home in the world; of feeling both ridiculously small and insignificant in the grand scheme and nonetheless a powerful centre of knowledge, freedom and value in the world.

aeon.co
Beauty and aesthetics History of ideas Values and beliefs
4 December 2018
Republish for free
Aeon is not-for-profit
and free for everyone
Make a donation
Get Aeon straight
to your inbox
Join our newsletter
Video/
Art
The Renaissance art illusion that proved everything is a matter of perspective

Video/
History of ideas
The self is not always selfish: Mary Midgley takes on Richard Dawkins