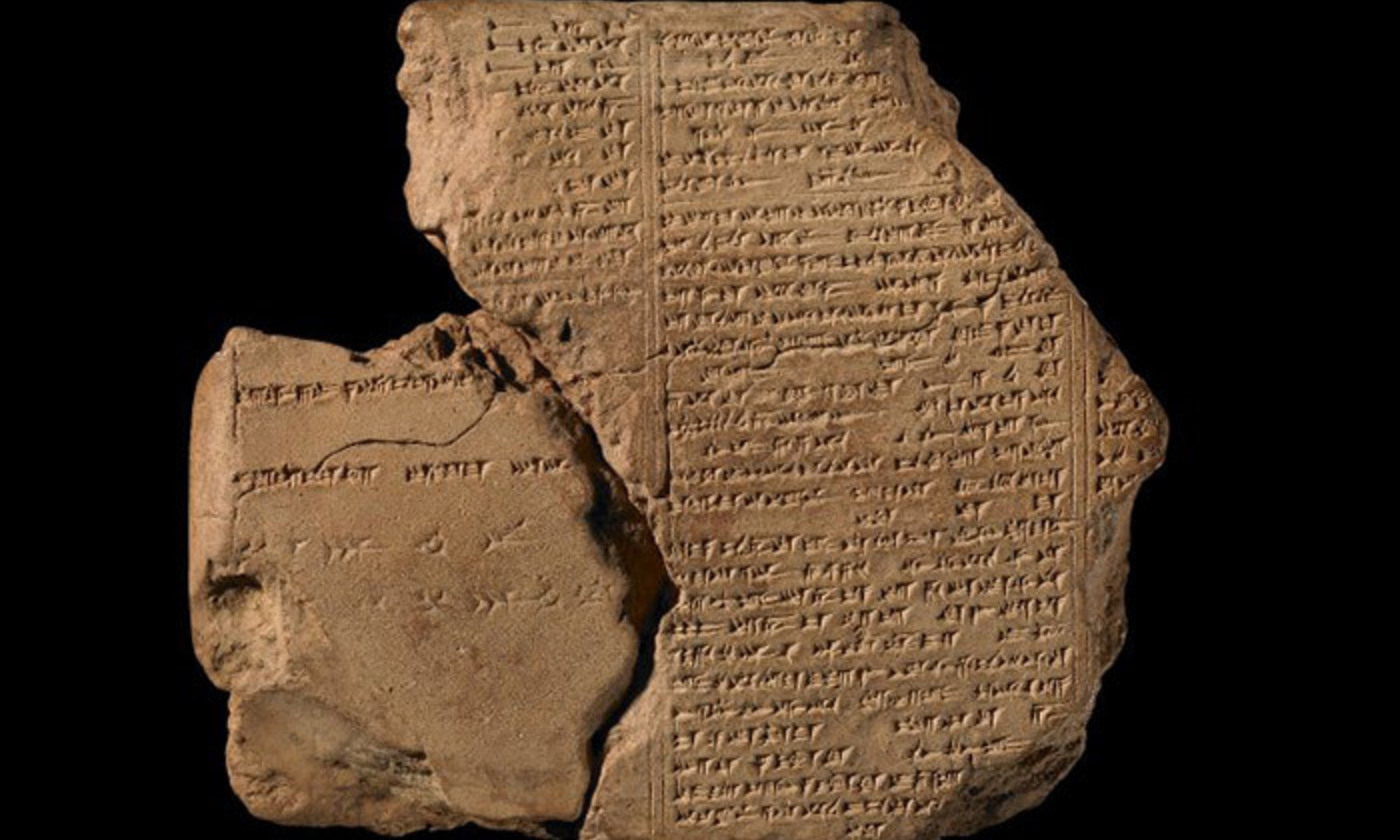 is a PhD student specialising in Babylonian literature at Aarhus University, Denmark. His work has been published in Postcolonial Studies and the Journal of Near Eastern Studies, among others.

The Epic of Gilgamesh is a Babylonian poem composed in ancient Iraq, millennia before Homer. It tells the story of Gilgamesh, king of the city of Uruk. To curb his restless and destructive energy, the gods create a friend for him, Enkidu, who grows up among the animals of the steppe. When Gilgamesh hears about this wild man, he orders that a woman named Shamhat be brought out to find him. Shamhat seduces Enkidu, and the two make love for six days and seven nights, transforming Enkidu from beast to man. His strength is diminished, but his intellect is expanded, and he becomes able to think and speak like a human being. Shamhat and Enkidu travel together to a camp of shepherds, where Enkidu learns the ways of humanity. Eventually, Enkidu goes to Uruk to confront Gilgamesh’s abuse of power, and the two heroes wrestle with one another, only to form a passionate friendship.

This, at least, is one version of Gilgamesh’s beginning, but in fact the epic went through a number of different editions. It began as a cycle of stories in the Sumerian language, which were then collected and translated into a single epic in the Akkadian language. The earliest version of the epic was written in a dialect called Old Babylonian, and this version was later revised and updated to create another version, in the Standard Babylonian dialect, which is the one that most readers will encounter today.

Not only does Gilgamesh exist in a number of different versions, each version is in turn made up of many different fragments. There is no single manuscript that carries the entire story from beginning to end. Rather, Gilgamesh has to be recreated from hundreds of clay tablets that have become fragmentary over millennia. The story comes to us as a tapestry of shards, pieced together by philologists to create a roughly coherent narrative (about four-fifths of the text have been recovered). The fragmentary state of the epic also means that it is constantly being updated, as archaeological excavations – or, all too often, illegal lootings – bring new tablets to light, making us reconsider our understanding of the text. Despite being more than 4,000 years old, the text remains in flux, changing and expanding with each new finding.

The newest discovery is a tiny fragment that had lain overlooked in the museum archive of Cornell University in New York, identified by Alexandra Kleinerman and Alhena Gadotti and published by Andrew George in 2018. At first, the fragment does not look like much: 16 broken lines, most of them already known from other manuscripts. But working on the text, George noticed something strange. The tablet seemed to preserve parts of both the Old Babylonian and the Standard Babylonian version, but in a sequence that didn’t fit the structure of the story as it had been understood until then.

Suddenly, Shamhat and Enkidu’s marathon of love had been doubled, a discovery that The Times publicised under the racy headline ‘Ancient Sex Saga Now Twice As Epic’. But in fact, there is a deeper significance to this discovery. The difference between the episodes can now be understood, not as editorial changes, but as psychological changes that Enkidu undergoes as he becomes human. The episodes represent two stages of the same narrative arc, giving us a surprising insight into what it meant to become human in the ancient world.

The first time that Shamhat invites Enkidu to Uruk, she describes Gilgamesh as a hero of great strength, comparing him to a wild bull. Enkidu replies that he will indeed come to Uruk, but not to befriend Gilgamesh: he will challenge him and usurp his power. Shamhat is dismayed, urging Enkidu to forget his plan, and instead describes the pleasures of city life: music, parties and beautiful women.

After they have sex for a second week, Shamhat invites Enkidu to Uruk again, but with a different emphasis. This time she dwells not on the king’s bullish strength, but on Uruk’s civic life: ‘Where men are engaged in labours of skill, you, too, like a true man, will make a place for yourself.’ Shamhat tells Enkidu that he is to integrate himself in society and find his place within a wider social fabric. Enkidu agrees: ‘the woman’s counsel struck home in his heart’.

It is clear that Enkidu has changed between the two scenes. The first week of sex might have given him the intellect to converse with Shamhat, but he still thinks in animal terms: he sees Gilgamesh as an alpha male to be challenged. After the second week, he has become ready to accept a different vision of society. Social life is not about raw strength and assertions of power, but also about communal duties and responsibility.

Placed in this gradual development, Enkidu’s first reaction becomes all the more interesting, as a kind of intermediary step on the way to humanity. In a nutshell, what we see here is a Babylonian poet looking at society through Enkidu’s still-feral eyes. It is a not-fully-human perspective on city life, which is seen as a place of power and pride rather than skill and cooperation.

What does this tell us? We learn two main things. First, that humanity for the Babylonians was defined through society. To be human was a distinctly social affair. And not just any kind of society: it was the social life of cities that made you a ‘true man’. Babylonian culture was, at heart, an urban culture. Cities such as Uruk, Babylon or Ur were the building blocks of civilisation, and the world outside the city walls was seen as a dangerous and uncultured wasteland.

Second, we learn that humanity is a sliding scale. After a week of sex, Enkidu has not become fully human. There is an intermediary stage, where he speaks like a human but thinks like an animal. Even after the second week, he still has to learn how to eat bread, drink beer and put on clothes. In short, becoming human is a step-by-step process, not an either/or binary.

In her second invitation to Uruk, Shamhat says: ‘I look at you, Enkidu, you are like a god, why with the animals do you range through the wild?’ Gods are here depicted as the opposite of animals, they are omnipotent and immortal, whereas animals are oblivious and destined to die. To be human is to be placed somewhere in the middle: not omnipotent, but capable of skilled labour; not immortal, but aware of one’s mortality.

In short, the new fragment reveals a vision of humanity as a process of maturation that unfolds between the animal and the divine. One is not simply born human: to be human, for the ancient Babylonians, involved finding a place for oneself within a wider field defined by society, gods and the animal world.

is a PhD student specialising in Babylonian literature at Aarhus University, Denmark. His work has been published in Postcolonial Studies and the Journal of Near Eastern Studies, among others.

aeon.co
Stories and literature Anthropology The ancient world
19 February 2019
Republish for free
Aeon is not-for-profit
and free for everyone
Make a donation
Get Aeon straight
to your inbox
Join our newsletter
Video/
Cities
Sketches from a Barcelona square offer an elegant celebration of people-watching

Being an employee is a threat to your liberty. But while firms exist, compulsory unions are a basic safeguard of freedom