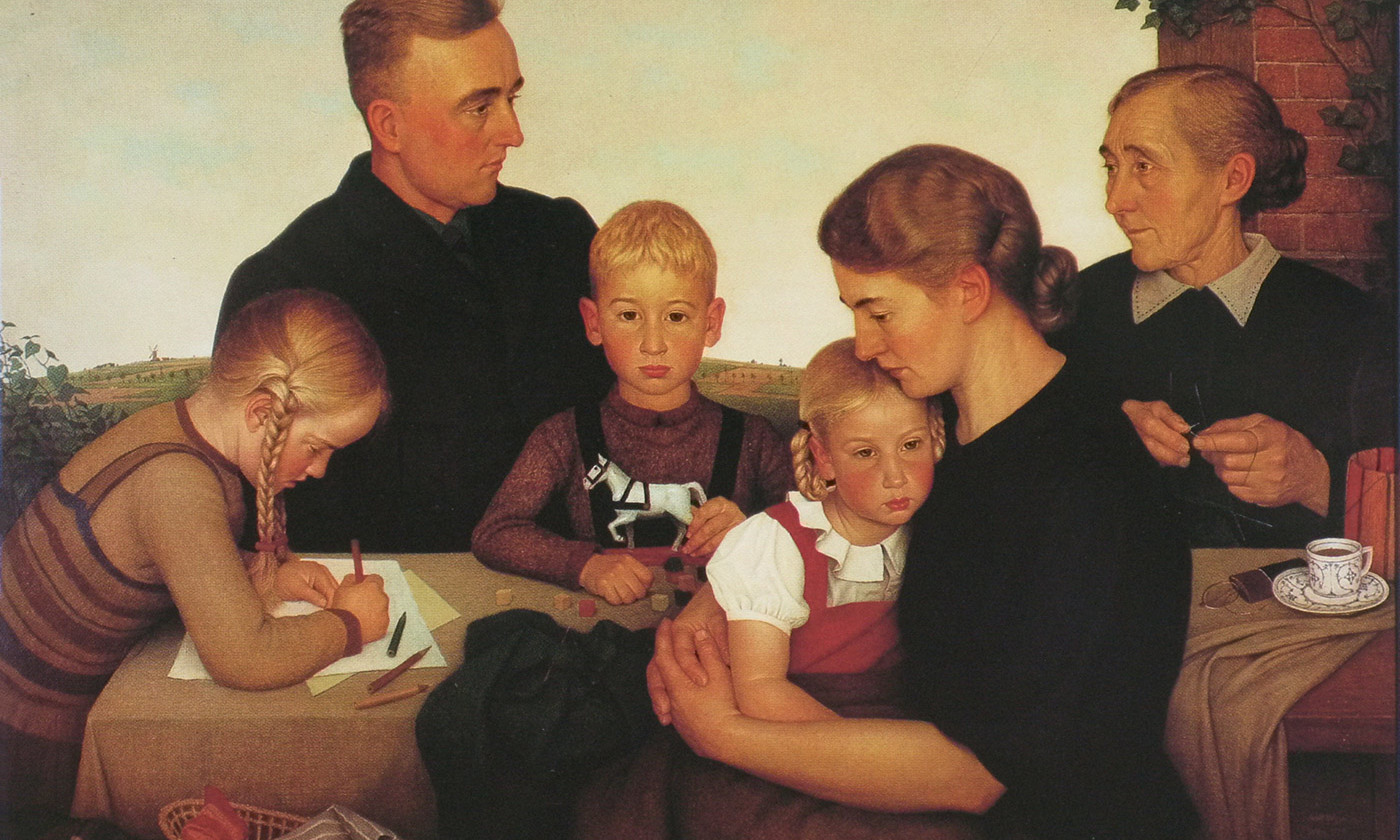 is professor of political science at Barnard College in New York. Her book Democracy and Dictatorship in Europe: From the Ancien Regime to the Present Day is forthcoming from Oxford University Press.

An analogy is haunting the United States – the analogy of fascism. It is virtually impossible (outside certain parts of the Right-wing itself) to try to understand the resurgent Right without hearing it described as – or compared with – 20th-century interwar fascism. Like fascism, the resurgent Right is irrational, close-minded, violent and racist. So goes the analogy, and there’s truth to it. But fascism did not become powerful simply by appealing to citizens’ darkest instincts. Fascism also, crucially, spoke to the social and psychological needs of citizens to be protected from the ravages of capitalism at a time when other political actors were offering little help.

The origins of fascism lay in a promise to protect people. In the late 19th and early 20th centuries, a rush of globalisation destroyed communities, professions and cultural norms while generating a wave of immigration. Right-wing nationalist movements promising to protect people from the pernicious influence of foreigners and markets arose, and frightened, disoriented and displaced people responded. These early fascist movements disrupted political life in some countries, but they percolated along at a relatively low simmer until the Second World War.

The First World War had devastated Europe, killing 16 million people, maiming another 20 million, crushing economies and sowing turmoil. In Italy, for example, the postwar period saw high inflation and unemployment, as well as strikes, factory occupations, land seizures and other forms of social unrest and violence. The Liberal Italian governments of the postwar era failed to adequately address these problems. The Liberals’ constituencies – businessmen, landowners, members of the middle class – abandoned them. The country’s two largest opposition parties – the socialist PSI and the Catholic PPI – also offered little effective redress to these basic social problems.

Benito Mussolini and his National Fascist Party (PNF) stepped into the breach, taking advantage of the failure or ineffectiveness of existing institutions, parties and elites, and offering a mixture of ‘national’ and ‘social’ policies. Fascists promised to foster national unity, prioritise the interests of the nation above those of any particular group, and promote Italy’s stature internationally. The fascists also appealed to Italians’ desire for social security, solidarity and protection from capitalist crises. They promised therefore to restore order, protect private property and promote prosperity but also to shield society from economic downturns and disruption. Fascists stressed that wealth entailed responsibilities as well as privileges, and should be administered for the benefits of the nation.

These appeals enabled the fascists to garner support from almost all socioeconomic groups. Italy was a young country (formed in the 1860s), plagued by deep regional and social divisions. By claiming to serve the best interests of the entire national community, it was in fact the fascists who became Italy’s first true ‘people’s party’.

After coming to power, the Italian fascists created recreational circles, student and youth groups, sports and excursion activities. These organisations all furthered the fascists’ goals of fostering a truly national community. The desire to strengthen (a fascist) national identity also compelled the regime to extraordinary cultural measures. They promoted striking public architecture, art exhibitions, and film and radio productions. The regime intervened extensively in the economy. As one fascist put it: ‘There cannot be any single economic interests which are above the general economic interests of the state, no individual, economic initiatives which do not fall under the supervision and regulation of the state, no relationships of the various classes of the nation which are not the concern of the state.’ Such policies kept fascism popular until the late 1930s, when Mussolini threw his lot in with Hitler. It was only the country’s involvement in the Second World War, and the Italian regime’s turn to a more overtly ‘racialist’ understanding of fascism, that began to make Italian fascism unpopular.

Italian fascism differed from its German counterpart in important ways. Most notably, perhaps, anti-Semitism and racism were more innate in the German version. But Italian and German fascism also shared important similarities. Like Italy, Germany was a ‘new’ nation (formed in 1871) plagued by deep divisions. After the First World War, Germany had found itself saddled with punitive peace terms. During the 1920s, it experienced violent uprisings, political assassinations, foreign invasion and a notorious Great Inflation. Then the Great Depression hit, causing immense suffering in Germany. The response of the government, and other political actors, however, must also be remembered. For different reasons, both the era’s conservative governments and their socialist opponents primarily favoured austerity as a response to the crisis. Thus came a golden opportunity for fascism.

Hitler’s National Socialist German Workers’ Party (NSDAP) promised to serve the entire German people, but the German fascist vision of ‘the people’ did not include Jews and other ‘undesirables’. They promised to create a ‘people’s community’ (Volksgemeinschaft) that would overcome the country’s divisions. The fascists also pledged to fight the Depression and contrasted its activism on behalf of the people’s welfare with the meekness and austerity of the government and the socialists. By the 1932 elections, these appeals to protect the German people helped the Nazis become the largest political party, and the one with the broadest socioeconomic base.

When, in January 1933, Hitler became chancellor, the Nazis quickly began work-creation and infrastructure programmes. They exhorted business to take on workers, and doled out credit. Germany’s economy rebounded and unemployment figures improved dramatically: German unemployment fell from almost 6 million in early 1933 to 2.4 million by the end of 1934; by 1938, Germany essentially enjoyed full employment. By the end of the 1930s, the government was controlling decisions about economic production, investment, wages and prices. Public spending was growing spectacularly.

Nazi Germany remained capitalist. But it had also undertaken state intervention in the economy unprecedented in capitalist societies. The Nazis also supported an extensive welfare state (of course, for ‘ethnically pure’ Germans). It included free higher education, family and child support, pensions, health insurance and an array of publically supported entertainment and vacation options. All spheres of life, economy included, had to be subordinated to the ‘national interest’ (Gemeinnutz geht vor Eigennutz), and the fascist commitment to foster social equality and mobility. Radical meritocratic reforms are not usually thought of as signature Nazi measures, but, as Hitler once noted, the Third Reich has ‘opened the way for every qualified individual – whatever his origins – to reach the top if he is qualified, dynamic, industrious and resolute’.

Largely for these reasons, up till 1939, most Germans’ experience with the Nazi regime was probably positive. The Nazis had seemingly conquered the Depression and restored economic and political stability. As long as they could prove their ethnic ‘purity’ and stayed away from overt shows of disloyalty, Germans typically experienced National Socialism not as a tyranny and terror, but as a regime of social reform and warmth.

There can be no question that violence and racism were essential traits of fascism. But for most Italians, Germans and other European fascists, the appeal was based not on racism, much less ethnic cleansing, but on the fascists’ ability to respond effectively to crises of capitalism when other political actors were not. Fascists insisted that states could and should control capitalism, that the state should and could promote social welfare, and that national communities needed to be cultivated. The fascist solution ultimately was, of course, worse than the problem. In response to the horror of fascism, in part, New Deal Democrats in the United States, and social democratic parties in Europe, also moved to re-negotiate the social contract. They promised citizens that they would control capitalism and provide social welfare policies and undertake other measures to strengthen national solidarity – but without the loss of freedom and democracy that fascism entailed.

The lesson for the present is clear: you can’t beat something with nothing. If other political actors don’t come up with more compelling solutions to the problems of capitalism, the popular appeal of the resurgent Right-wing will continue. And then the analogy with fascism and democratic collapse of the interwar years might prove even more relevant than it is now.

is professor of political science at Barnard College in New York. Her book Democracy and Dictatorship in Europe: From the Ancien Regime to the Present Day is forthcoming from Oxford University Press.

aeon.co
Politics and government War and peace Economic history
27 March 2017
Republish for free
Aeon is not-for-profit
and free for everyone
Make a donation
Get Aeon straight
to your inbox
Join our newsletter
Video/
Personality
Eight men reflect on their paths to prison – and imagine their alternative lives

Study For Liberty Displaying the Arts and Sciences, or The Genius of America Encouraging the Emancipation of the Blacks (1791-92) by Samuel Jennings. Courtesy the Met Museum/New York

It’s not just that Hegel and Rousseau were racists. Racism was baked into the very structure of their dialectical philosophy

Detail of ‘Siege of the City’ by Jean Charlot, watercolour of a fresco at Chichén Itzá. The Maya mural from the Las Monjas building clearly shows a ship with the distinct wooden planks of a Viking boat © Jean Charlot/Artists Rights Society [ARS]; Copyright Agency, 2020

Centuries before Columbus, Vikings came to the Western hemisphere. How far into the Americas did they travel?