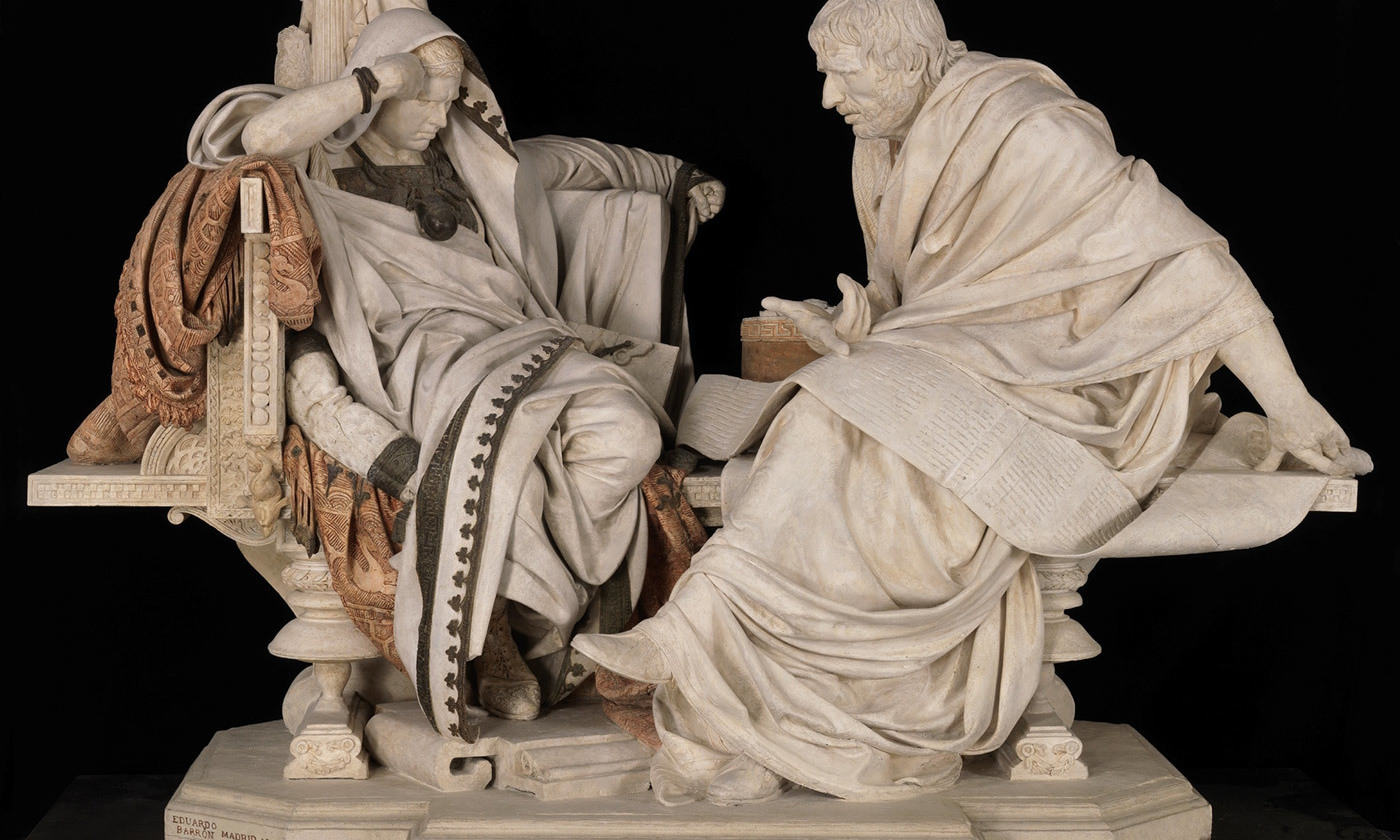 is department chair and professor of history of philosophy at the University of Groningen in the Netherlands. He is currently finalising his latest book Socialising Minds: Intersubjectivity in Early Modern Philosophy (2020).

Philosophical discussions, whether in a professional setting or at the bar, frequently consist of calling out mistakes in whatever has been proposed: ‘This is all very well, but …’ This adversarial style is often celebrated as truth-conducive. Eliminating false assumptions seems to leave us with truth in the marketplace of ideas. Although this is a fairly pervasive practice (even I am practising it right now), I doubt that it is a particularly good approach to philosophical discussions. The lack of progress in adversarial philosophical exchange might rest on a simple but problematic division of labour: in professional settings such as talks, seminars and papers, we standardly criticise others’, rather than our own, views. At the same time, we clearly risk our reputation much more when proposing an idea rather than criticising it. This systematically disadvantages proponents of (new) ideas.

Adversarial criticism is commonly driven by a binary understanding of ideas. Claims are either true or false; arguments are either valid or invalid. If this understanding is correct, then the exclusion of false or invalid points does indeed seem to leave us with true ideas. If this were the case, criticism would indeed be a good way of responding to the proponent of an idea. But how well does this work in practice? The philosopher Catherine Hundleby at the University of Windsor in Ontario analysed how argumentation is taught to students and concluded that ‘argument repair’, in which the proponents of a position revise their argument in response to criticism, is greatly neglected. Instead, what is emphasised are quick tools for evaluating arguments by putting ‘fallacy labels’ onto them. This is less helpful than one might think because it’s purely negative.

Still, you might think that if arguments or claims are defective, pointing out weaknesses will eventually help. How then do proponents of ideas respond to criticism? In my own experience, philosophers are more likely to be simply defensive of their position rather than to try to clarify it. If a claim is attacked, a typical reaction of the proponent is to limit the scope, tone down the emphases or adjust perspectives. The idea is pruned before it has even been looked at. Given that making bold claims might involve reputational risks, it is not surprising that people reactively exert damage control and align their claims with what they take to be acceptable. As Tim Crane of the University of Cambridge pointed out in ‘The Philosopher’s Tone’ (2018), peer review has similar effects in that authors try to pre-empt every possible objection, leaving less and less space to build up original ideas.

You might object that this is not a problem. In fact, damage control might lead us away from more extreme tenets while remaining truth-conducive. However, there are good grounds for the assumption that people align to a perceived status quo even in the face of counter-evidence. In the 1950s, the social psychologist Solomon Asch conducted his famous conformity experiments. Subjects had to solve fairly obvious perceptual tasks, but many gave wrong answers in order to align with the group: they disregarded the evidence right in front of them in order not to stray from the status quo. Since then, the experiments were repeated under various conditions, showing the detrimental effects of social pressure.

Considering these psychological facts, I find it difficult to believe that exposure to relentless criticism is truth-conducive. If the overall aim of academic philosophers is to at least appear to be conforming to shared opinions, then we should expect exactly what we often witness in proponents of ideas: toning down and aligning their claims with perceived common sense.

But even if adversarial criticism often incentivises conformity, this doesn’t make it wrong to look out for mistakes. After all, if we know that something is false, we do know more than before. Or so one might argue. However, spotting a mistake doesn’t automatically render an opposing claim true. If you convince me that p is false, I just know that: p is false. But it does not mean that q is true. As I see it, the idea that criticism is truth-conducive thrives on the idea that the number of possible claims about a given topic is finite. If you have 20 claims and cast aside one of them, then you seem to have made progress. You need to listen to only 19 further papers. Yet, assuming limited cognitive capacities in a changing world and the options of reformulating and recontextualising claims, I’d rather think that the number of claims and arguments is indefinite.

My worry is not that we keep too many options on the table; it is that we cast aside ideas too soon. As the philosopher Ralph Johnson, also of the University of Windsor, has noted, every argument is vulnerable to potential criticism. If this is correct, then mistakes or the options of finding them abound. By contrast, philosophical claims that will go unchallenged are extremely rare. (In fact, I can’t think of one.) This means that, in contrast to critics, proponents of ideas are at a systematic disadvantage. But this is not only for status reasons. In philosophy at least, one is more likely to run into error than to hit the nail on the head. While this might seem frustrating, it can tell us something about the nature of philosophical claims: perhaps the point of philosophical arguments is not truth after all, but rather wisdom, or something like it.

Whatever the point of claims and arguments, it should be clear that the adversarial culture rests on dubious ideas. Even if we cast aside more pragmatic and political concerns about conformism, the misleading idea that the exclusion of falsehoods leaves us with truth turns philosophy into a daunting project. What can we do? A sensible response might be to construe criticism not as adversarial to the idea or its proponent. Rather it should be seen as an integral part of ideas.

How can we implement such an approach? On the one hand, this requires a holistic view of ideas: an idea is not just an individual claim but rather intimately related to a number of other claims, assumptions and consequences. A good illustration of this is the commentary traditions of medieval philosophy. A commentary does not or not mainly criticise a given claim, but fleshes out points in one way or another. Ockham’s commentary on Aristotle’s logic, for instance, clearly differs from that of Aquinas. But it’s not as if one of them were wrong; they present different ways of taking a claim and have become part of possible understandings of Aristotle.

On the other hand, this requires a more fluid attitude towards authorship: if you discuss an idea among friends, tossing out illustrations, laughing away criticism and speculating about remote applications, whose idea is it at the end of the night? Everyone might have contributed to an initial formulation, of which hardly anything might be left. In this sense, ideas very often have multiple authors. In such friendly settings, a common reaction to a clarifying criticism is not defence, but something along the lines of: ‘Right, that’s what I actually meant to say!’ The point is that amicable, rather than adversarial, criticism can be taken as a better expression of one’s initial attempt, rather than a hostile elimination of the idea. This doesn’t mean that no idea can turn out to be false or bad, but it does mean that we can make sure it’s undergone proper scrutiny beforehand.

Seeing critique as part of the claim, then, would mean altering the evaluative stance towards ideas as well as their proponents. The more we can toy and tinker around with a claim, the more we can understand its implications. The appropriate metaphorical resources for naming this philosophical practice should not be derived from warfare but from playgrounds, where reinvention and serendipity guide our interactions. The critical nature of philosophy will thrive more if we model our conversations on the playful exchanges among friends rather than on the idea of a tribunal looking to tear down a philosopher who has an idea.

is department chair and professor of history of philosophy at the University of Groningen in the Netherlands. He is currently finalising his latest book Socialising Minds: Intersubjectivity in Early Modern Philosophy (2020).

aeon.co
Thinkers and theories History of ideas Comparative philosophy
08 January, 2020
Republish for free
Aeon is not-for-profit
and free for everyone
Make a donation
Get Aeon straight
to your inbox
Join our newsletter
Video/
Philosophy of religion
If you think that modern cosmology leaves no room for ‘god’, start using your imagination