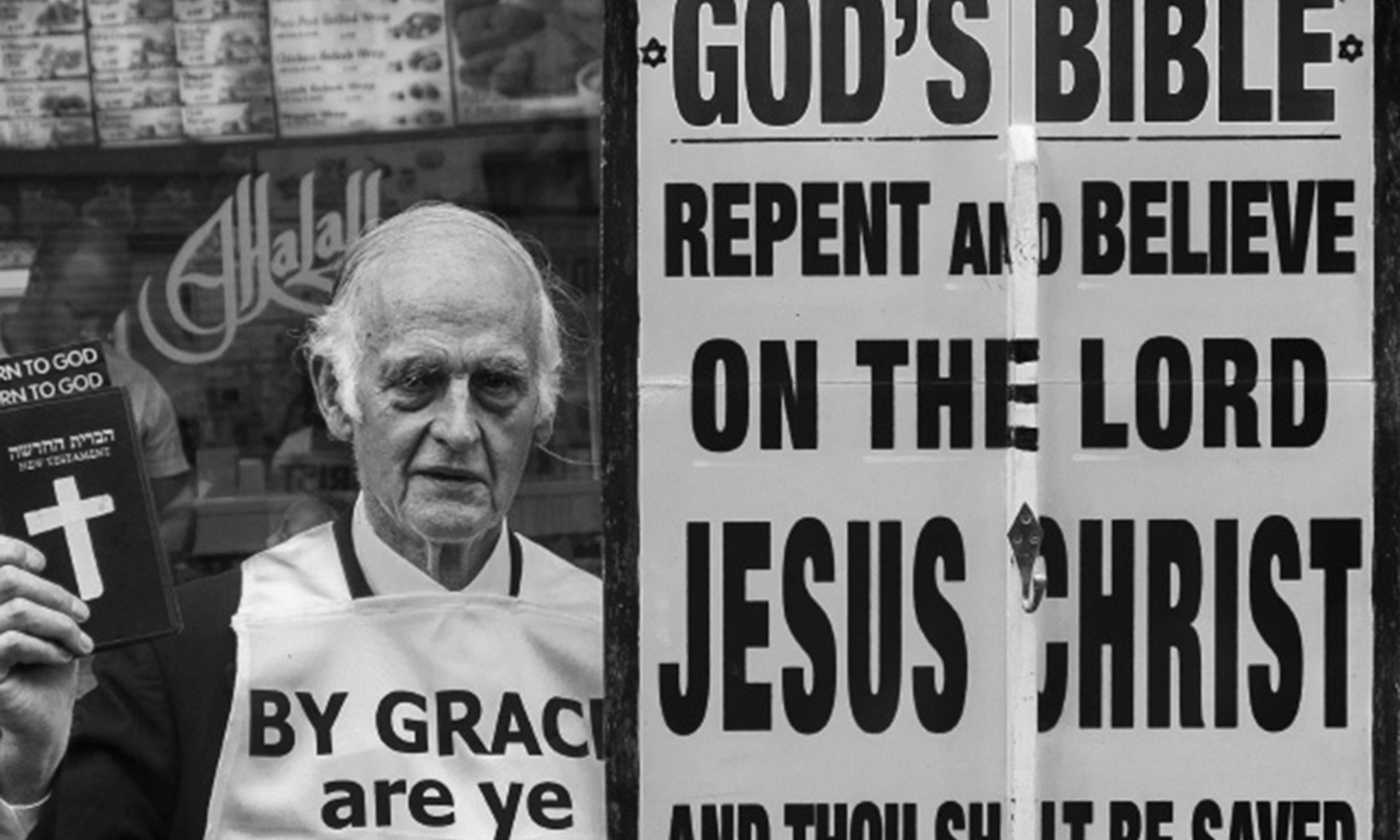 writes the monthly ‘Beliefs’ column for The New York Times and also reports for The Atlantic, The Nation, This American Life, and elsewhere. His most recent book is The Zen Predator of the Upper East Side (2013).

Recently, I took my wife to see a touring production of The Book of Mormon, the profane, hilarious musical about college-aged missionaries dropped into a violent, HIV-plagued fictional country in darkest Africa. As showtime neared, and we gathered with other ticket-holders outside the front doors of the Shubert Theater in New Haven, slowly funnelling our way inside, we were approached by a young Asian man.

‘You want Book of Mormon?’ he asked, in accented English. First, I thought that he was trying to scalp some tickets, but then I took in his outfit (black pants, white shirt, black necktie) and his short haircut, noticed that he had a satchel of printed matters, and figured out that he was playing a Mormon missionary. He was part of the cast! Truly brilliant! To give the theatre-goers the true experience of being proselytised by a Mormon missionary, the show had hired faux-missionaries to approach us outside the theatre. ‘Nice,’ I said, as I reached to shake his hand. ‘So you’re in the show?’

‘No,’ he said, shaking his head, confused. ‘I’m Mormon. You want to learn more?’

Then I got it. He was a real, live Mormon, who had decided that the paying audience for a play about Mormonism was a fruitful crowd in which to seek converts. Here were hundreds of people with at least a theatre-goer’s interest in Mormonism; he wasn’t going to pass up a good opportunity to preach the word. And now I was totally charmed. As my wife yanked on my arm, I tried to stand my ground and talk to this young man about his faith. I soon got pulled away, but not before getting his name and a little bit of his life story.

As my wife knows, to her chagrin, I’m a sucker for proselytisers, and not just because I write about religion for a living and have a professional soft spot for anyone who will discuss belief. I like proselytisers because they refuse to respect the proliferating barriers that we place between ourselves and other people. With the demise of the door-to-door salesman, hawking encyclopaedias or hairbrushes, only local politicians, canvassers for progressive causes, and religious proselytisers have the temerity to ring doorbells and make their pitch, or to walk up to strangers on the street and proffer their hands. By their continued existence, they testify to the belief that it’s a good thing for strangers to encounter one another, unmediated, without prior appointment by telephone, text, or email.

I first began to think about the radicalism of the proselytiser when I was helping to organise a union of fellow teaching assistants and graders at my graduate school. It was a contentious fight. The administration was fiercely opposed to our unionising, and many of my fellow graduate students sided with the administration. Because some students wouldn’t return our calls, and because others didn’t have landlines with listed phone numbers, we organisers often paid house calls around dinner time. We’d knock on doors, and sometimes students would let us in to talk, and sometimes they wouldn’t. When they told us to go away, we did. It was all quite civil. Same way it would go down with a Greenpeace canvasser, or a Fuller Brush man of yore.

But when students opposed to the union wanted to illustrate how radical, how unhinged, how dangerous we union organisers were, they would often say: ‘They come to our houses, at night, and knock on our doors.’ To the union opponents, all of them highly educated women and men in their 20s, there was something obviously sinister about organisers – who were people they knew from their academic departments, not marauders or street people – knocking on their doors.

Some of the students, I knew, came from countries where unexpected knocks on the door could only mean something bad. I get that. But many of the students were Americans, who had never had anything to fear from colleagues and neighbours. They simply were, as we all are, victims of the era. Once the telephone arrived, a growing suspicion of door-knockers was probably inevitable. As long as one could call before dropping by, it became suspicious not to. And now that it’s easy-peasy to shoot off a text en route, an unexpected visitor seems even more peculiar. So almost nobody is left to uphold the idea that when one human being engages another whom he doesn’t know, that’s more than okay – it’s good. It speaks to the vigour of democracy. It shows spirit.

But the religious people – along with the politicians, the activists, and the occasional salesman – still get that. In the past year, I’ve gotten knocks on my door from environmentalists asking me to give money and sign a petition to Save the Sound; a canvasser for a non-profit that fights for more funding for charter schools, asking me to answer survey questions (he came twice, forgetting I’d answered his questions before); a man who wanted to demonstrate his super-duper cleaning solution on the green slime that was beginning to creep up my porch steps; a campaign worker for an aldermanic candidate; Jehovah’s Witnesses; and Mormons.

Sometimes I step out on my porch and have a good conversation with these visitors. Sometimes I don’t feel like talking and, when I decline, I decline politely. I do wish the Jehovah’s Witnesses would stop visiting on Saturday, which is my people’s Sabbath. But never mind. They are still knocking on doors, still connecting. Can they be an irritant? Sure. But less of one than pop-up ads on my web browser or the solicitation calls that come every night at dinner time. The face-to-face proselytisers look me in the eye and make a pitch, and while you could say that they are trying to sell me something, I prefer to say that they’re trying to save my soul. Or improve our country. It’s American, in the best way, making their pitch with words and not guns. Even when they’re wrong, it’s right that they keep coming.

writes the monthly ‘Beliefs’ column for The New York Times and also reports for The Atlantic, The Nation, This American Life, and elsewhere. His most recent book is The Zen Predator of the Upper East Side (2013).

aeon.co
Values and beliefs Religion Rituals and celebrations
10 December 2015
Republish for free
Aeon is not-for-profit
and free for everyone
Make a donation
Get Aeon straight
to your inbox
Join our newsletter
Video/
Animals and humans
The divisive debate over hunting Norway’s endangered wolves