Would the world be more peaceful if there were more women leaders? 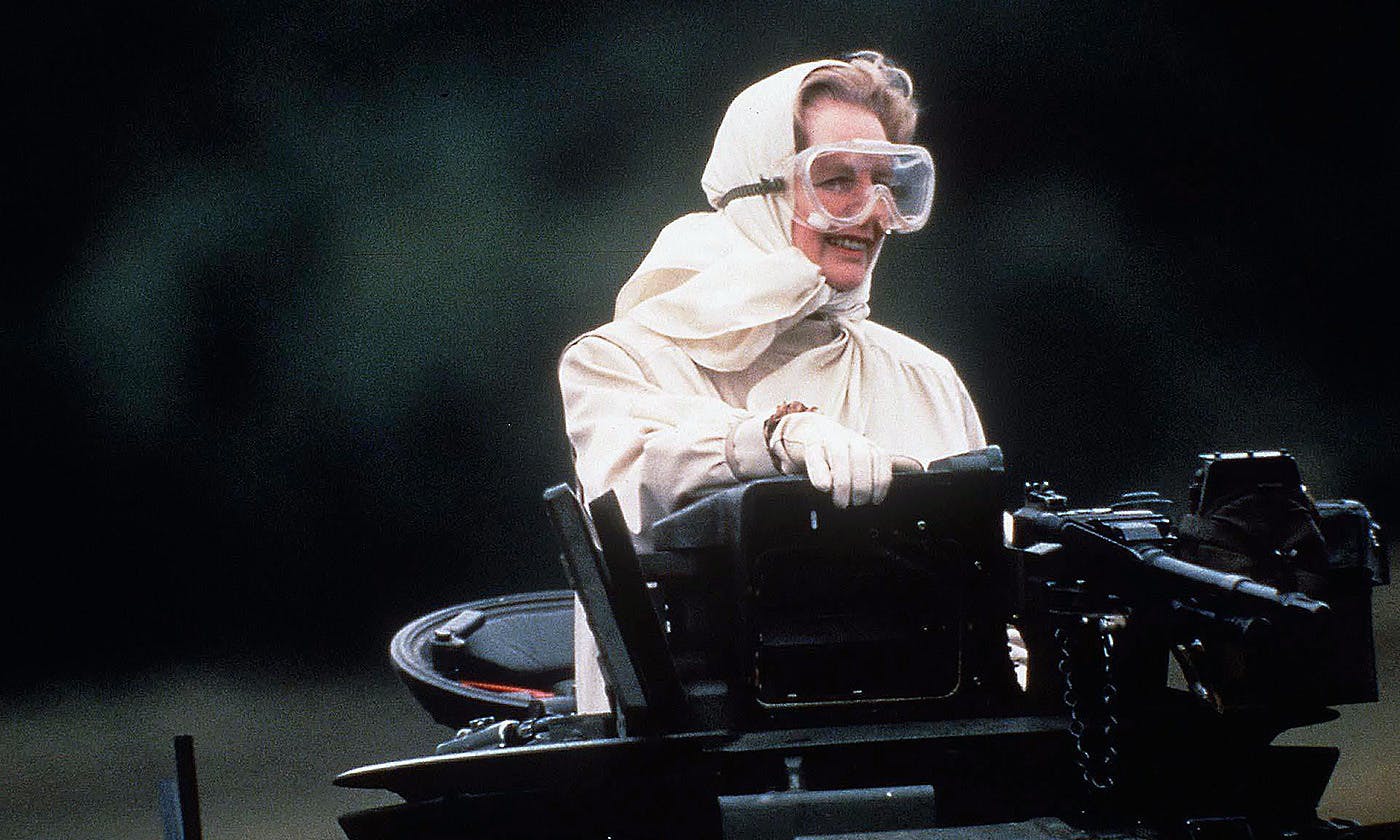 is a journalist who writes about science and the environment for magazines including Nature, National Geographic, Hakai magazine and the Israeli newspaper Haaretz. She is the author of Buzz: The Intimate Bond Between Humans and Insects (2004), and lives in Israel.

During the opening months of the First World War, in the midst of the incendiary jingoism roiling Britain, the poet Dorothea Hollins of the Women’s Labour League proposed that an unarmed, 1,000-strong ‘Women’s Peace Expeditionary Force’ cross Europe ‘in the teeth of the guns’ and interpose itself between the warring armies in the trenches. Hollins’s grand scheme did not materialise, but neither did it emerge in a vacuum; it was nurtured by a century of activism largely grounded in maternal love. Or, as her fellow peace activist Helena Swanwick wrote: the shared fear that in war ‘women die, and see their babies die, but theirs is no glory; nothing but horror and shame unspeakable’.

Swanwick helped to found the Women’s International League for Peace and Freedom, an organisation dedicated to eliminating the causes of war. She hoped for ‘a world in the far-off future that will not contain one soldier’. Many activists believed that if women had political power, they would not pursue war. But how true is this? Do incidences of violent conflict alter when women become leaders, or when their share of parliamentary representation rises? In what sense do women mother wars?

If you ask this question out loud, not a minute will pass before someone says ‘Margaret Thatcher’, the British prime minister who waged a hugely popular war in the Falklands that led to her landslide 1983 election victory. Thatcher is hardly the only woman leader celebrated for her warmongering. Think of Boudicca, the woad-daubed Queen of the Iceni people of eastern England, who led a popular uprising against the Roman invaders; or Lakshmi Bai, Queen of Jhansi and a leader of the 1857-58 Indian Mutiny against the British; or even Emmeline Pankhurst, who led British suffragettes on a militant campaign of hunger strikes, arson and window-smashing, then, in 1914, became a vociferous supporter of Britain’s entry into the Great War.

But these examples are anecdotal because, throughout history, women leaders have been extremely rare. Between 1950 and 2004, according to data compiled by Katherine W Phillips, professor of leadership and ethics at Columbia Business School, just 48 national leaders across 188 countries – fewer than 4 per cent of all leaders – have been female. They included 18 presidents and 30 prime ministers. Two countries, Ecuador and Madagascar, had a woman leader, each of whom served for a mere two days before being replaced by a man.

Given the tiny sample size, does it even make sense to ask if, given power, women are more or less likely than men to wage wars? The medical anthropologist Catherine Panter-Brick, who directs the conflict, resilience and health programme at the MacMillan Center for International and Area Studies at Yale University, thinks not. ‘It stereotypes gender, and assumes leadership is uncomplicated,’ she told me. Perhaps she had thinkers such as Stephen Pinker in her sights. In The Better Angels of Our Nature (2011), his study of violence throughout history, Pinker wrote: ‘women have been, and will be, the pacifying force’. That assumption is not always grounded in reality, says Mary Caprioli, a professor of political science at the University of Minnesota Duluth. Along with Mark A Boyer at the University of Connecticut, she counted 10 military crises in the 20th century involving four female leaders (seven of which were handled by Golda Meir, Israel’s prime minister from 1969 to 1974). To assess the behaviour of women leaders during crises, they say, one needs a large sample – ‘which history cannot provide’.

Oeindrila Dube, a professor of global conflict studies at the University of Chicago, and S P Harish at New York University – have studied four centuries of European kings and queens. In their as-yet-unpublished working paper, they examined the reigns of 193 monarchs in 18 European polities, or political entities, between the years 1480 to 1913. Although just 18 per cent of the monarchs were queens – making their analysis less statistically reliable – they found that polities ruled by queens were 27 per cent more likely than kings to participate in inter-state conflicts. Unmarried queens were more likely to engage in wars in which their state was attacked, perhaps because they were perceived as weak.

The fear of appearing weak affects modern women leaders too, according to Caprioli, perhaps causing them to over-compensate on issues of security and defence. She notes that women who emulate men, such as Thatcher, Meir and India’s prime minister Indira Gandhi (1980-84) – who claimed to be a ‘biform human being’, neither man nor woman – are more likely to succeed as political leaders. They must also contend with negative stereotypes from male opponents: for example, Yahya Khan, former president of Pakistan (1969-71), said that he would have responded less violently toward Indira Gandhi during the 1971 Indo-Pakistan War if India had had a male leader. ‘If that woman [Gandhi] thinks she can cow me down, I refuse to take it,’ he said.

Dube and Harish found that women were more likely to aggress if they were sharing power with a spouse, as in the case of Isabella I and Ferdinand V, who co-ruled the Kingdoms of León and Castile between 1474 and 1504. A notable exception is Catherine the Great, who became Empress of Russia in 1762 following the assassination of her husband Peter III, and whose military campaigns extended the borders of Russia by 520,000 square km, incorporating Crimea and much of Poland.

For women to lead, they must often begin with political involvement – running for state or national parliaments, leading campaigns, organising women to run for office. In 2017, the worldwide average of women in parliament is only 23.3 per cent – a 6.5 per cent gain over the past decade. That gain is significant: Caprioli’s data shows that, as the number of women in parliament increases by 5 per cent, a state is five times less likely to use violence when confronted with an international crisis (perhaps because women are more likely to use a ‘collective or consensual approach’ to conflict resolution).

States are also more likely to achieve lasting peace post-conflict when women are invited to the negotiating table. Although the number of women included in peace talks is minuscule (a United Nations study found that just 2.4 per cent of mediators and 9 per cent of negotiators are women, and just 4 per cent of the signatories of 31 peace processes), the inclusion of women can make a profound difference. Peace is more likely to endure: an analysis by the US non-profit Inclusive Security of 182 signed peace agreements between 1989 and 2011 found that an agreement is 35 per cent more likely to last at least 15 years if women are included as negotiators, mediators and signatories.

Women succeed as mediators and negotiators because of qualities traditionally perceived as feminine and maternal. In Northern Ireland, Somalia and South Africa, female participants in peace processes earned a reputation for fostering dialogue and engaging all sides. They are also often seen as honest brokers, more trustworthy and less threatening, because they act outside formal power structures. Yet despite the perception of softness and malleability, their actions are often quite the opposite. In 2003, the Liberian peace activist Leymah Gbowee led a coalition of thousands of Muslim and Christian women in picketing, praying and fasting that helped to end the country’s brutal 14-year civil war. Dubbed ‘a warrior for peace’, Gbowee shared the 2011 Nobel Peace Prize.

Terms such as warrior, weapons and revolution are often used for groups that agitate for peace, among whom women continue to be ‘disproportionately highly represented’, according to the UN. In Israel, Women Wage Peace organises protests to pressure the government to work towards a viable peace agreement. In Argentina, the Mothers of the Plaza de Mayo ‘revolutionised’ motherhood by protesting the disappearance of their children during Argentina’s ‘dirty war’ from 1977 to 1983, transforming maternity from a passive role to one of public strength.

The ‘weaponising’ of traditional notions of femininity was also a strong component of the decade-long women’s peace camp at Greenham Common in the UK. Beginning in 1981 as a protest against the arrival of 96 Tomahawk cruise missiles at the US air base in Berkshire, the women surrounded and cut the fences of the air base, clambered over the barrier dressed as teddy bears, and pinned babies’ clothes, bottles, teething rings, diapers and family photos to the wires. Their battle was no less militant than Thatcher’s war in the Falklands, yet she dismissed the women as an ‘eccentricity’.

It seems that, no matter whether women are fighting for peace or for war, they must also battle against the assumption that they themselves are passive, weak or peculiar. History shows us that that isn’t true, and that, in the case of Isabella I and Ferdinand V, they could be relentlessly cruel: not only did the royal couple lead the Spanish conquest of the Islamic Kingdom of Granada in 1492, expelling both Jews and Muslims, they tortured those who remained and converted them to Christianity – in some cases burning them to death.

Nor are they always as peaceable as their personal history suggests: Aung San Suu Kyi, the de facto leader of Myanmar and a recipient of the Nobel Peace Prize in 1991 ‘for her non-violent struggle for democracy and human rights’, has been widely condemned for failing to denounce the country’s military for its campaign of ethnic cleansing against the persecuted Rohingya people, a Muslim minority in Myanmar’s northern Rakhine state. According to Human Rights Watch, since 25 August 2017, more than 400,000 Rohingya Muslims have fled across the border to Bangladesh to escape the army’s barrage of arson, atrocities and rape.

As Caprioli notes: ‘Women leaders can indeed be forceful when confronted with violent, aggressive and dangerous international situations.’ But they can also be aggressive in the cause of peace. It is, indeed, a stereotype to dismiss women as inherently peaceable. As Swanwick wrote in The Future of the Women’s Movement (1913): ‘I wish to disclaim altogether the kind of assumption … in feminist talk of the present day.’ That is, ‘the assumption that men have been the barbarians who loved physical force, and that women alone were civilised and civilising. There are no signs of this in literature or history.’