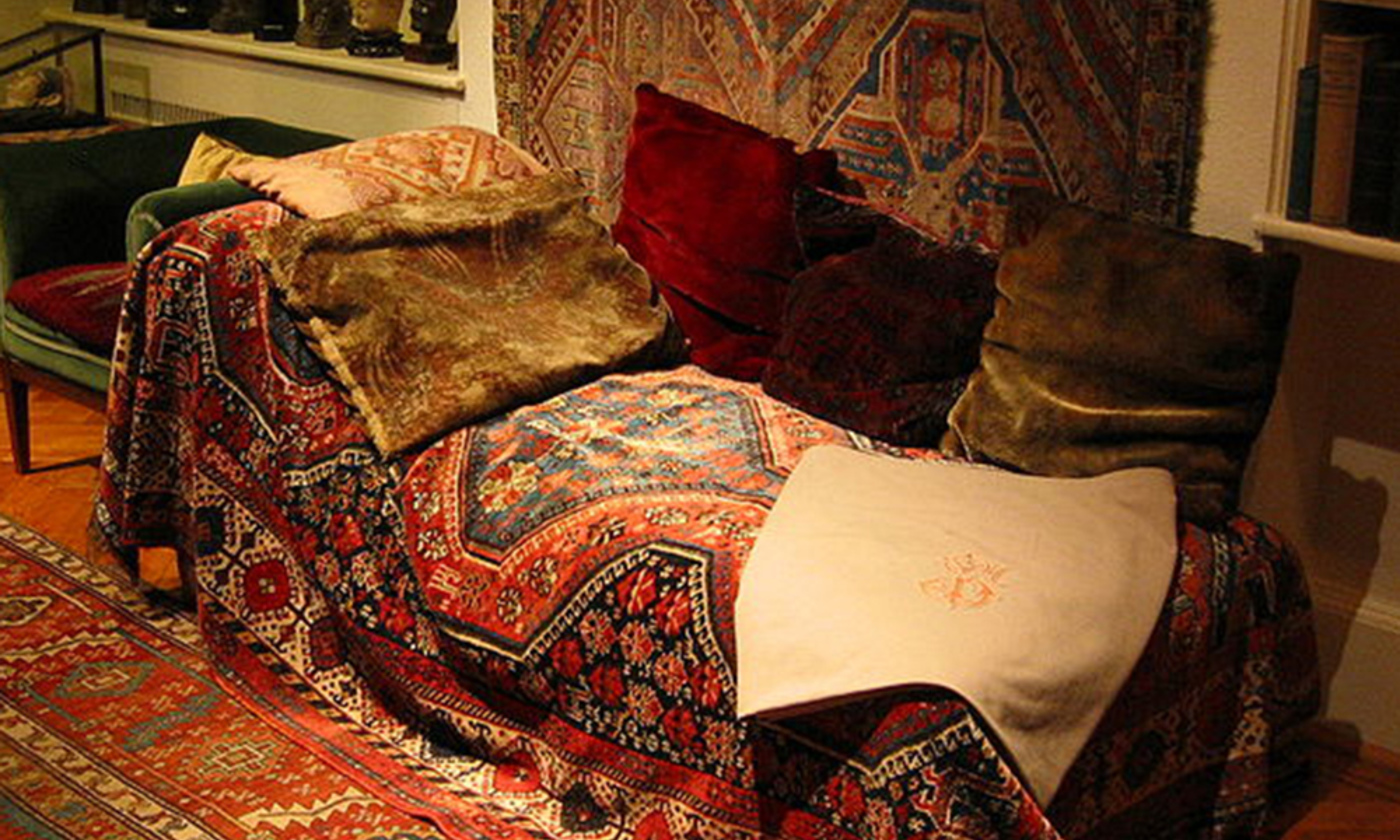 is a writer, philosopher and podcaster. His most recent book is A Little History of Philosophy (2011)

is policy director at the Centre for the History of the Emotions at Queen Mary at the University of London. He is the author of Philosophy for Life and Other Dangerous Situations (2013) and The Art of Losing Control: A Philosopher’s Search for Ecstatic Experience (2017).

Nigel Warburton: There’s been a lot of interest in reviving Stoic philosophy recently, particularly the therapeutic aspects of it. I’m skeptical about this, as in my view philosophy is primarily the attempt to understand, and as such is an activity of enquiry. There’s no guarantee that discovering how things are will benefit us psychologically: it might in fact make things much worse. As Friedrich Nietzsche pointed out, it might not even be possible to confront the deeper truths of reality head-on. That would make human existence unbearable. What do you think?

Jules Evans: Personally, I’m not arguing that all philosophy is therapy, but rather that ancient Greeks and Romans viewed philosophy that way, as did many Indian philosophers. They developed various practical techniques which they said would help transform suffering, that were part of a comprehensive ‘philosophy of life’. These techniques weren’t simply positive thinking, rather they argued that we need to see the world as it is, in all its instability and adversity, and accept it. Some of these techniques have now been rediscovered and tested out by empirical psychologists, who have found that they do indeed transform emotional suffering. I want to communicate this as much as possible, because ancient philosophy really can help people overcome suffering – and that’s to the credit of philosophy, which as you know is a much-maligned and under-funded subject these days. Don’t you think the more we communicate that, the higher philosophy’s standing and relevance in the world will be?

Now, do I think that wellbeing is a higher value than truth? No. I hope I would never cling to something because it made me happy, if I suspected it wasn’t true. Philosophy involves a restless search for the truth, an unceasing examination of one’s assumptions. I enjoy that search, which is why I didn’t stop at Stoicism, but have kept on looking, because I don’t think Stoicism is the whole truth about reality. But what gives me the motive to keep on looking is ultimately a sort of Platonic faith that the truth is good, and that it’s good for me. Why bother searching unless you thought the destination was worth reaching?

NW: Obviously, not all philosophies of life work equally well. You mentioned that there is some empirical support for the psychological techniques that you find in some ancient philosophy. Could you be more specific about this?

JE: Cognitive behavioural therapy (CBT) is one of the few talking therapies that is approved  by the UK’s National Institute for Health and Care Excellence (NICE) and provided by the National Health Service. Its two inventors, the US psychotherapists Albert Ellis and Aaron Beck, both told me they were directly inspired by Stoicism. Specifically, CBT is based on the Stoic idea that our emotions are connected to our thoughts and beliefs, and we can learn to attain a ‘cognitive distance’ from our automatic beliefs and see them as just thoughts rather than the truth. CBT also took specific practices for transforming our thoughts from ancient philosophy, such as: using a journal to track and challenge habitual thought patterns; using maxims to memorise and habituate insights; using visualisation techniques to change perspective; using fieldwork or behavioural ‘homework’ to turn new beliefs into habitual actions, and so on.

NW: Isn’t that an argument for using psychological techniques such as CBT rather than for going back to ancient Stoicism? Aristotle was a significant proto-scientist, but present-day scientists would be ill-advised to base their practice on his…

JE: If you have an acute emotional disorder, CBT is certainly the place to start. However, CBT leaves out important stuff. Firstly, it’s less beautifully written than the works of, say, Marcus Aurelius, Lucretius or Seneca, and beauty has a power over the soul. Secondly, CBT instrumentalises the ancient techniques and leaves out any idea of the ethical goal (happiness, inner peace, virtue, justice, etc). Thirdly, CBT doesn’t consider how ethics is connected to physics – the ancients try to answer and at least remind us that this is an important question. Fourth, CBT is designed to be a short-term, eight- to 16-week intervention rather than a philosophy for life, ie something you practise your whole life. But it wouldn’t be appropriate for a therapist to impose an ethical philosophy on you as a cure for depression or anxiety – they give you the basic self-change techniques, but it’s for you to choose your broader life-philosophy.

NW: I suppose this all turns on what you think philosophy is. I see philosophy as an activity of thinking critically about what we are and where we stand in relation to the world, an activity with a long and rich history. Philosophy is concerned with how things are, the limits of what we can know, and how we should live. It is anti-dogmatic and thrives on questioning assumptions. No serious philosophy is likely to leave the philosopher unchanged, but that doesn’t mean that the change will be for the better or more consoling: to think otherwise is begging the question. There are huge dangers of self-deception here, in thinking that philosophy is some kind of panacea that will make us all better, saner people. Just to give one example, impeccable logic from false premises can lead you very far astray. How do you see philosophy?

JE: I approach philosophy as a sort of pragmatism – I have a set of values and an idea of how the world is, and I try it out and see if I can live by it, if it fits reality, if it leads to an expanded sense of flourishing. And reality (including other people) feeds back to me, lets me know if I’m living wisely or foolishly. That two-way process is always changing, you’re always adapting and revisiting assumptions. But no one can be entirely anti-dogmatic – one needs a set of values and opinions to live by. I think you must have one too, no? I’m sure it has changed over time but if you were a complete skeptic, like Pyrrho, you wouldn’t know whether to get out of bed or not.

NW: Yes, of course we must take some things for granted. But everything in principle can be questioned, though some beliefs are more firmly rooted than others. I like your idea of a reflective equilibrium between ideas and lived experience. What values do you try to live by as a result of this approach?

JE: I try to live by humility, kindness, reverence and creativity. But if you knew how badly I lived by those values you would laugh at me. How about you?

NW: I like Bertrand Russell’s message to the future, delivered on the BBC in 1959. He boiled down his philosophical values to two principles. First, try to look solely at the facts on any issue, rather than at what you would like to be true. No easy task, of course. Second, and this is another hard one to live up to: ‘Love is wise, hatred is foolish.’ We have to learn to put up with the fact that people will say things that we don’t like, detest even. To live together, we need to be able to speak freely, and tolerate others who do that too. Like you, I obviously fail to live up to these values much of the time, but these are good principles, nevertheless.

is a writer, philosopher and podcaster. His most recent book is A Little History of Philosophy (2011)

is policy director at the Centre for the History of the Emotions at Queen Mary at the University of London. He is the author of Philosophy for Life and Other Dangerous Situations (2013) and The Art of Losing Control: A Philosopher’s Search for Ecstatic Experience (2017).

aeon.co
Wellbeing Meaning and the good life Values and beliefs
18 January, 2016
Republish for free
Aeon is not-for-profit
and free for everyone
Make a donation
Get Aeon straight
to your inbox
Join our newsletter
Video/
Film and visual culture
‘From dream to reality!’ The 1960s spoof that marked the dawn of self-aware advertising