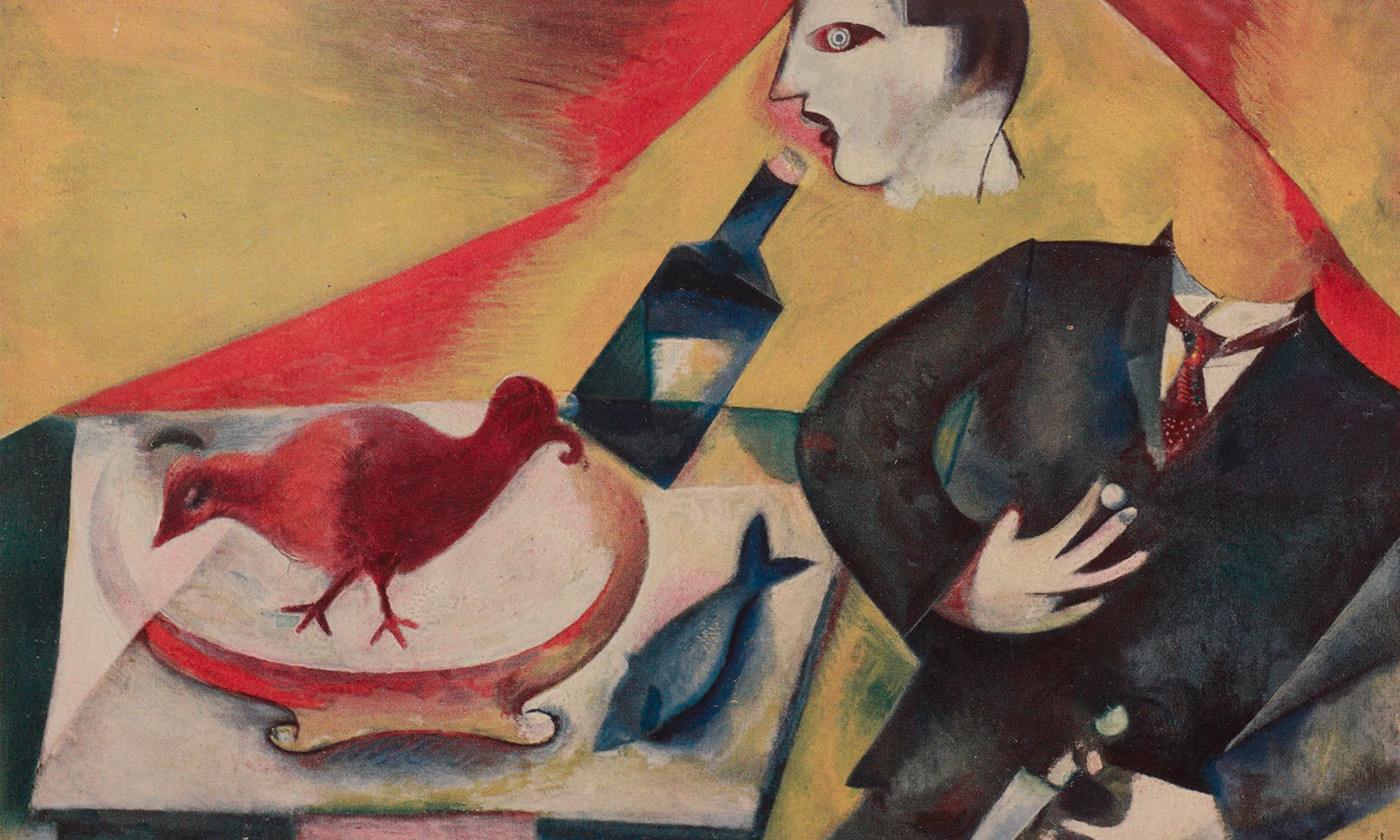 Detail from The Drunkard (1912) by Marc Chagall. Courtesy Wikipedia

is a professor of philosophy at the University of Massachusetts, Lowell, a Miller Scholar at the Santa Fe Institute, and author of Hiking with Nietzsche: On Becoming Who You Are (2018). He lives outside Boston.

Detail from The Drunkard (1912) by Marc Chagall. Courtesy Wikipedia

I am not what one might call a religious man. I went to church, and then to confirmation class, under duress. My mother, whom I secretly regarded as more powerful than God, insisted that I go. So I went. Her insistence, however, had the unintended consequence of introducing me to a pastor whom I came to despise. So I eventually quit.

There were many problems with this pastor but the one that bothered me the most was his refusal to explain a story from the New Testament that I found especially hard to believe: the story of the demoniac.

This story from Mark 5:1-20 relates how Jesus and the disciples go to the town of Gerasenes and there encounter a man who is possessed by evil spirits. This demoniac – a self-imposed outcast from society – lived at the outskirts of town and ‘night and day among the tombs and in the hills he would cry out and cut himself with stones’. The grossest part of the story, however, isn’t the self-mutilation. It’s the demoniac’s insane refusal to accept help. When Jesus approached him, the demoniac threw himself to the ground and wailed: ‘What do you want with me? … In God’s name, don’t torture me!’ When you’re possessed by evil spirits, the worst thing in the world is to be healed. In short, the demoniac tells Jesus to bugger off, to leave him and his sharp little stones in his comfortable corner of hell.

When I first read about the demoniac, I was admittedly scared, but I eventually convinced myself that the parable was a manipulative attempt to persuade unbelievers such as me to find religion. And I wasn’t buying it. But when I entered university, went into philosophy, and began to cultivate an agnosticism that one might call atheism, I discovered that many a philosopher had been drawn to this scary story. So I took a second look.

The Danish philosopher Søren Kierkegaard, who spent years analysing the psychological and ethical dimensions of the demoniac, tells us that being demonic is more common than we might like to admit. He points out that when Jesus heals the possessed man, the spirits are exorcised en masse, flying out together as ‘the Legion’ – a vast army of evil forces. There are more than enough little demons to go around, and this explains why they come to roust in some rather mundane places. In Kierkegaard’s words: ‘One may hear the drunkard say: “Let me be the filth that I am.”’ Or, leave me alone with my bottle and let me ruin my life, thank you very much. I heard this first from my father, and then from an increasing number of close friends, and most recently from a voice that occasionally keeps me up at night when everyone else is asleep.

Those who are the most pointedly afflicted are often precisely those who are least able to recognise their affliction, or to save themselves. And those with the resources to rescue themselves are usually already saved. As Kierkegaard suggests, the virtue of sobriety makes perfect sense to one who is already sober. Eating well is second nature to the one who is already healthy; saving money is a no-brainer for one who one is already rich; truth-telling is the good habit of one who is already honest. But for those in the grips of crisis or sin, getting out usually doesn’t make much sense.

Sharp stones can take a variety of forms.

In The Concept of Anxiety (1844), Kierkegaard tells us that the ‘essential nature of [the demoniac] is anxiety about the good’. I’ve been ‘anxious’ about many things – about exams, about spiders, about going to sleep – but Kierkegaard explains that the feeling I have about these nasty things isn’t anxiety at all. It’s fear. Anxiety, on the other hand, has no particular object. It is the sense of uneasiness that one has at the edge of a cliff, or climbing a ladder, or thinking about the prospects of a completely open future – it isn’t fear per se, but the feeling that we get when faced with possibility. It’s the unsettling feeling of freedom. Yes, freedom, that most precious of modern watchwords, is deeply unsettling.

What does this have to do with our demoniac? Everything. Kierkegaard explains that the demoniac reflects ‘an unfreedom that wants to close itself off’; when confronted with the possibility of being healed, he wants nothing to do with it. The free life that Jesus offers is, for the demoniac, pure torture. I’ve often thought that this is the fate of the characters in Jean-Paul Sartre’s play No Exit (1944): they are always free to leave, but leaving seems beyond impossible.

Yet Jesus manages to save the demoniac. And I wanted my pastor to tell me how. At the time, I chalked up most of the miracles from the Bible as exaggeration, or interpretation, or poetic licence. But the healing of the demoniac – unlike the bread and fish and resurrection – seemed really quite fantastic. So how did Jesus do it? I didn’t get a particularly good answer from my pastor, so I left the Church. And never came back.

Today, I still want to know.

I’m not here to explain the salvation of the demoniac. I’m here only to observe, as carefully as I can, that this demonic situation is a problem. Indeed, I suspect it is the problem for many, many readers. The demoniac reflects what theologians call the ‘religious paradox’, namely that it is impossible for fallen human beings – such craven creatures – to bootstrap themselves to heaven. Any redemptive resources at our disposal are probably exactly as botched as we are.

There are many ways to distract ourselves from this paradox – and we are very good at manufacturing them: movies and alcohol and Facebook and all the fixations and obsessions of modern life. But at the end of the day, these are pitifully little comfort.

So this year, as New Year’s Day recedes from memory and the winter darkness remains, I am making a resolution: I will try not to take all the usual escapes. Instead, I will try to simply sit with the plight of the demoniac, to ‘stew in it’ as my mother used to say, for a minute or two more. In his essay ‘Self-will’ (1919), the German author Hermann Hesse put it thus: ‘If you and you … are in pain, if you are sick in body or soul, if you are afraid and have a foreboding of danger – why not, if only to amuse yourselves … try to put the question in another way? Why not ask whether the source of your pain might not be you yourselves?’ I will not reach for my familiar demonic stones, blood-spattered yet comforting. I will ask why I need them in the first place. When I do this, and attempt to come to terms with the demoniac’s underlying suffering, I might notice that it is not unique to me.

When I do, when I let go of the things that I think are going to ease my suffering, I might have the chance to notice that I am not alone in my anxiety. And maybe this is recompense enough. Maybe this is freedom and the best that I can hope for.

is a professor of philosophy at the University of Massachusetts, Lowell, a Miller Scholar at the Santa Fe Institute, and author of Hiking with Nietzsche: On Becoming Who You Are (2018). He lives outside Boston.

aeon.co
Meaning and the good life History of ideas Philosophy of religion
25 February, 2019
Republish for free
Aeon is not-for-profit
and free for everyone
Make a donation
Get Aeon straight
to your inbox
Join our newsletter
Video/
Philosophy of religion
If you think that modern cosmology leaves no room for ‘god’, start using your imagination