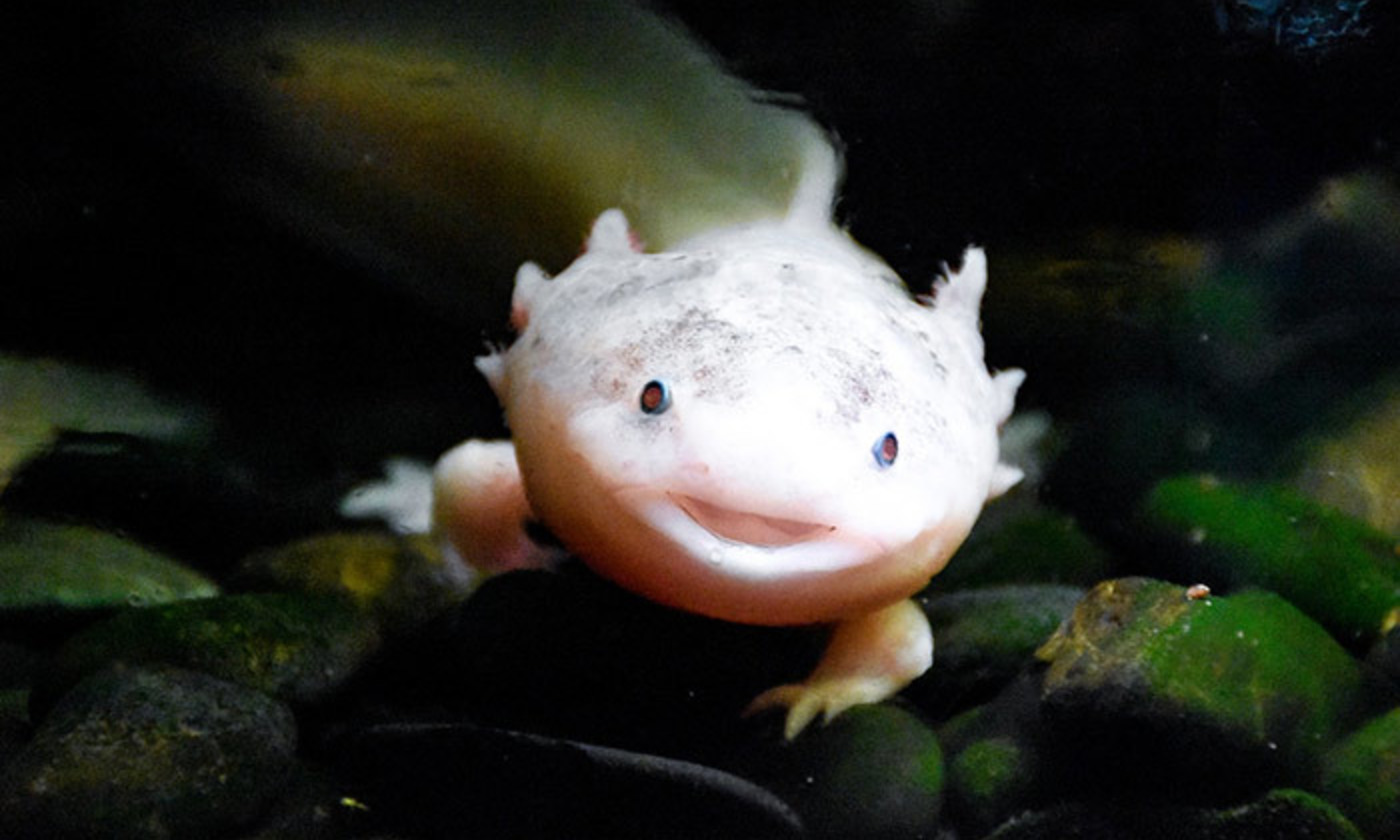 is a writer currently based in New York. His features and essays have appeared in Harper’s, The New Republic, The Guardian and The New Yorker, among others.

It has long been understood, and by cultures too various to list, that salamanders have something of the supernatural about them. Their name is thought to derive from an ancient Persian vocable meaning ‘fire within’, and for at least 2,000 years they were believed to be impervious to flames, or even capable of extinguishing them on contact. Aristotle recorded this exceptional characteristic, as did Leonardo da Vinci. The Talmud advises that smearing salamander blood on your skin will confer inflammability. Not so. But the intuition that salamanders possess fantastical powers is not unfounded.

Like earthbound immortals, salamanders regenerate. If you cut off a salamander’s tail, or its arm, or its leg, or portions of any of these, it will not form a stump or a scar but will instead replace the lost appendage with a perfect new one, an intricacy of muscle, nerve, bone and the rest. It will sprout like a sapling. Science has been chopping up salamanders for more than 200 years with the aim of simply understanding the mechanics of their marvels, but more recently with the additional aim of someday replicating those marvels in ourselves. Might salamanders be the great hope of regenerative medicine?

The salamander in which regeneration is most often studied is an odd and endearingly unattractive Mexican species known as the axolotl. In addition to its limbs and extremities, the axolotl is known to regrow its lower jaw, its retinae, ovaries, kidneys, heart, rudimentary lungs, spinal cord, and large chunks of its brain. It heals all sorts of wounds without scarring. The axolotl also integrates the body parts of its fellows as if they were its own, without the usual immune response, and this peculiar trait has facilitated some of the more grotesque disfigurements it’s endured in the name of science. In experiments after the Second World War, East German scientists grafted small axolotls crosswise through the backs of larger ones. The animals’ circulatory systems came to be linked, and the researchers hailed the conjoined mutants as triumphs of collectivism. While the axolotl can rebound from almost any bodily humiliation, it seems that humankind is proving too much for it: we have all but destroyed its natural habitat, and, outside of laboratory aquaria, it is nearly extinct.

In its most common form, which scientists call the white mutant, the axolotl resembles what the translucid foetus of a cross between an otter and a shortfin eel might look like. On the internet, it is celebrated for its anthropoid smile; in Mexico, where the Aztecs once hailed as it as a godly incarnation, it is an insult to say that someone looks like one. Behind its blunt and flattened head extends a distended torso resolving into a long, ichthyic tail. The axolotl can grow to nearly a foot in length; four tiny legs dangle off its body like evolutionary afterthoughts. It wears a collar of what seem to be red feathers behind each cheek, and these ciliated gill stalks float and tremble and gently splay in the water, like the plumage in a burlesque fan. They grow back if you cut them off, too. Precisely how the animal accomplishes this, or any of its feats of regrowth, is not well understood.

Like the axolotl, our evolutionary forebears seem to have been regenerators, and human children can in fact still regrow the tips of their fingers above the final joint, but that’s the only complex regeneration we’re known to do. We are, instead, a species that scars. Why our lineage lost its regenerative birthright is unclear. From our present evolutionary vantage point, however, it might be nice to get back what we lost. Amputees could recover their limbs; paralytics could walk; degeneration and decline of all sorts might be reversed.

Last year, after a long effort by an international consortium, the axolotl genome – 10 times the length of the human genome – was finally sequenced. In early 2019, it was mapped onto chromosomes by a team at the University of Kentucky. (It is, for the moment, the longest genome ever sequenced by far.) Jessica Whited, who heads an axolotl lab at Harvard Medical School, told me that, for those who hope to someday make regeneration available to human medicine, the axolotl is a perfect instruction manual. Its language simply needs decoding.

Regeneration is not, however, the axolotl’s only biological extravagance, or prime mystery. Another puzzle of the axolotl concerned what it was. Most salamanders begin their lives as aquatic larvae, like tadpoles, before metamorphosing into terrestrial adults, but the axolotl seems to be a lifelong adolescent, the so-called ‘Peter Pan of salamanders’, remaining in its larval stage even as it arrives at sexual maturity. This retention of juvenile traits, a phenomenon known as neoteny, perplexed taxonomists, and for decades they debated whether it ought to be considered a species of its own or merely the larval form of the common tiger salamander. Confoundingly, on occasion the axolotl could be goaded (under what conditions remains unclear) into a final transformation, absorbing its gills and fins, and walking out of the water. In biological terms, the scale of this change is akin to a middle-aged human one day broadening her shoulders, lurching forward on her hands and loping off to the jungle to be a gorilla. In France, the Grand Dictionnaire Universel du XIXe siècle (1866) declared the axolotl ‘the most imperfect, the most degraded of all the amphibians’: a fallen creature, but also one that could accede, as if by grace, to a higher state of being.

Humans are attuned to this sort of qualified possibility. In 1920, the British biologist Julian Huxley found that he could cause axolotls to metamorphose by feeding them bits of sheep thyroid. The Daily Mail declared that Huxley had discovered ‘The Elixir of Life’. Huxley’s younger brother, the writer Aldous, adopted the axolotl as a metaphor for mankind, its peculiar neoteny an emblem of our incompletion, our frustrated potentiality. A number of his literary contemporaries became neoteny-boosters. Gerald Heard, the philosophising scholar, maintained in 1941 that the survival of mankind would depend upon individuals ‘who manage to retain, with full mental stature, the radical originality and freshness of a vigorous child’; John Dewey and Timothy Leary held similar views. More recently, the Mexican sociologist Roger Bartra has proposed the axolotl, in its neotenous indeterminacy, as a symbol of his country’s national character.

If the axolotl mirrors us so nicely, it’s fitting that we, too, are neotenous. Our flat faces, small noses, hairless bodies and upright postures are all features of infancy in our evolutionary cousins and forebears. We also spend more of our lives in a juvenile state than any other primate. Our brains grow rapidly for a longer period, and are consequently larger; our childhoods are greatly extended, providing occasion for the lengthy training of those brains. We also maintain throughout our lives a ‘remarkable persistent juvenile characteristic of investigative curiosity’, in the words of the zoologist Konrad Lorenz. ‘The constitutive character of man,’ Lorenz wrote in 1971, ‘is a neotenous phenomenon.’

Some affinity seems to have drawn us to the salamander since well before we fantasised in a serious way of regrowing our bodies how the salamander regrows its own. Perhaps this is what spurred the ancients and the Aztecs to ennoble the animals through mythology. Nowhere has the intuition of kinship been rendered more plainly, though, than in the Argentinian surrealist Julio Cortázar’s short story ‘Axolotl’ (1952). Cortázar writes of one man’s quiet obsession with the animals, whom he visits every day at an aquarium. ‘After the first minute I knew that we were linked,’ the man says, ‘that something infinitely lost and distant kept pulling us together.’ He watches through the glass tank until, one day, almost imperceptibly, he finds himself suspended in the water beside the creatures, transmuted into one of them, peering out at his former human soma peering in. ‘Only one thing was strange: to go on thinking as usual,’ the erstwhile man says, ‘to know.’

is a writer currently based in New York. His features and essays have appeared in Harper’s, The New Republic, The Guardian and The New Yorker, among others.

aeon.co
Biology Animals and humans Genetics
27 November 2019
Republish for free
Aeon is not-for-profit
and free for everyone
Make a donation
Get Aeon straight
to your inbox
Join our newsletter

Elizabeth I of England (c1588), artist unknown. One of three known as the Armada portraits and on display in Woburn Abbey. Courtesy Wikipedia

Essay/
Cognition and intelligence
How to be a genius