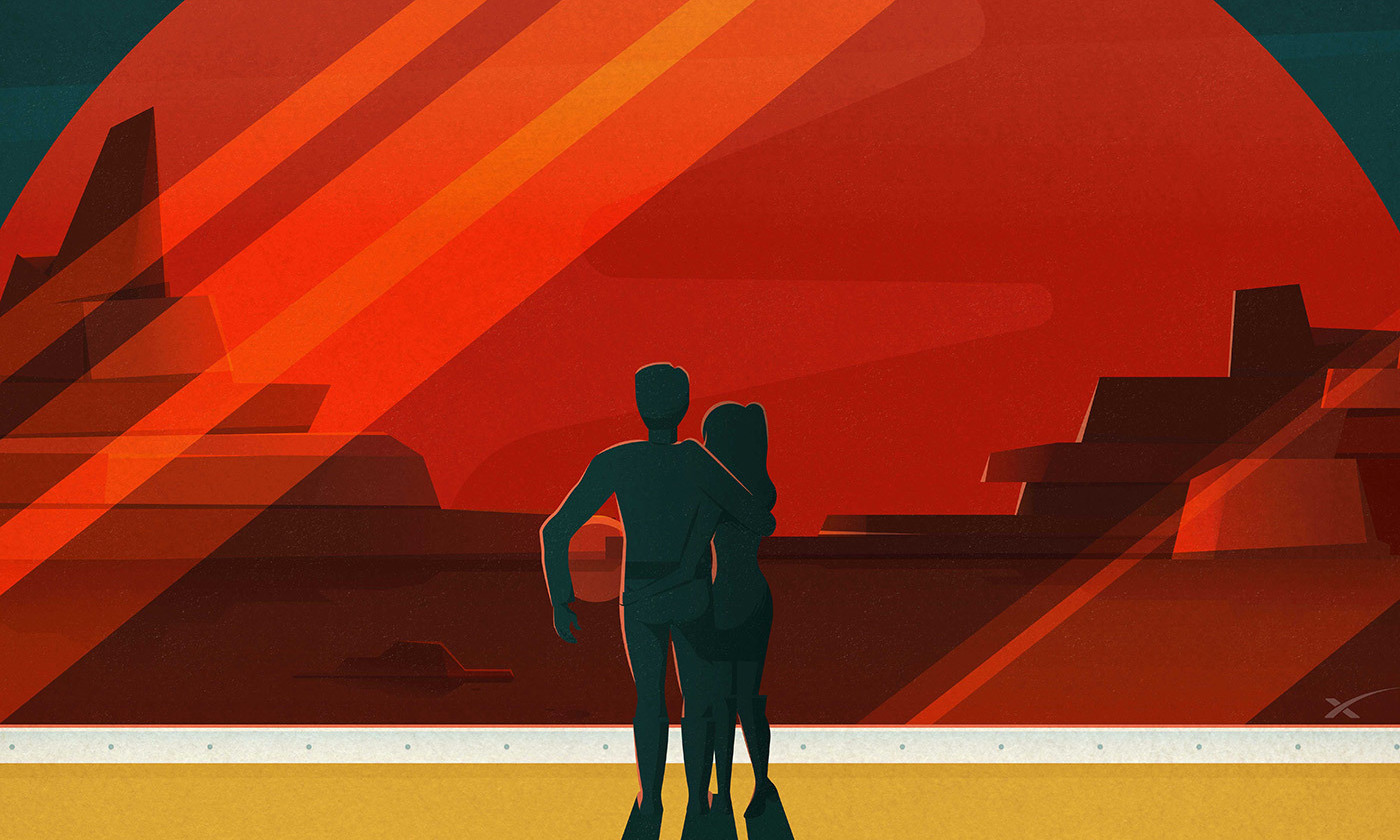 I am stranded on Mars. The fuel tanks on my return vessel ruptured, and no rescue team can possibly reach me before I run out of food. (And, unlike Matt Damon, I have no potatoes.) Luckily, my ship features a teleporter. It is an advanced bit of gadgetry, to be sure, but the underlying idea is simplicity itself: the machine scans my body and produces an amazingly detailed blueprint, a clear picture of each cell and neuron. That blueprint file is then beamed back to Earth, where a ‘new me’ is constructed using raw materials available at the destination site. All I have to do is step in, close my eyes, and press the red button…

But there’s a complication: a toggle switch allows me to decide whether the ‘old me’ on Mars is preserved or destroyed after I teleport back home. It’s this decision that is causing me to hesitate.

On the one hand, it seems like what makes me me is the particular way in which all my components fit together. I don’t think there is such a thing as a soul, or some ghost that inhabits my machine. I’m just the result of the activity among my 100 billion neurons and their 100 trillion distinctive connections. And, what’s more, that activity is what it is, no matter what collection of neurons is doing it. If you went about replacing those neurons one by one, but kept all the connections and activity the same, I would still be me. So, replacing them altogether at once should not matter, so long as the distinctive patterns are maintained. This leads me to want to press the button and get back to my loved ones – and back to Earth’s abundant food, water and oxygen, which will allow me to continue repairing and replacing my cells in the slower, old-fashioned way.

So: if I put the toggle in the ‘destroy’ setting, I should survive the transfer just fine. What would be lost? Nothing that plays any role in making me me, in making my consciousness my own. I should step in, press the button – and then walk out of the receiver back on Earth.

On the other hand, what happens if I put the toggle in the ‘save’ setting? Then where would I be? Would I make the trip back to Earth, and then feel sorry for the poor sap back on Mars (the old me), who will be facing slow death by starvation? Or – horrors! – will I be that old me, feeling envy for the new me who is now on Earth, enjoying the company of friends and family?

Could I somehow be both? What would that be like? Would I be seeing the scene on Earth superimposed upon the Martian landscape? Would I be feeling both pangs of hunger and exquisite delight in eating my first home-cooked meal in years? How would I decide at the same time to both walk over the dunes of red sand and go to sleep in my own bed? Is this even conceivable?

A residual conservatism in my nature prompts me to think that I would stay the old me, and the new me – whoever he is – would be like a twin to me, indeed more similar to the old me than any natural twin could possibly be. He would feel all the things I would feel, have the same memories, and be so very glad that he’s not starving on Mars. But, for all that, he would not be me: I would not be thinking or experiencing the things he is, nor would he be aware of my own increasingly desperate experience. But if this line of thinking is correct, I am suddenly very reluctant to turn the toggle over to the ‘destroy’ setting. For then it would seem that I would simply be annihilated on Mars, and some new guy on Earth, some guy a lot like me, would falsely believe he had survived the trip.

But why ‘falsely’? The memories are just as much in his brain as mine, are they not? From his point of view, he experienced stepping into the teleporter, pressing the button, and walking out onto Earth. He’s not lying when he says that that’s what happened. Still: I – the one who steps into the teleporter and presses the button – would not subsequently have this new guy’s experience of walking out onto Earth. My next experience after pressing the button would be – well, it would be no experience at all, as I would be dead.

Perhaps I need to adopt a more objective point of view. Suppose others were observing all this. What would they see? They would see me step in, press the button, and then – depending on the toggle setting – they would see either two copies of me, one on Mars and one on Earth, or else just one copy of me on Earth and some smouldering remains on Mars. There is no real problem, from this outsider’s point of view. There is no test an observer could perform to determine whether I survived the trip to Earth – no personality test, no special ‘me-ometer’ readings, no careful analysis of discrepancies among the neurons. Everything proceeds as expected, no matter what the toggle setting is.

Maybe there is something to be learned from this. Perhaps what seems to me an extremely obvious truth – namely, that there should be some fact to the matter of what I experience once I step in and press the button – is really not a truth at all. Maybe the notion that I am an enduring self over time is some sort of stubborn illusion. By analogy, I once joined a poker club that had been in existence for more than 50 years, with a complete change in its membership over that time. Suppose someone were to ask whether it was the same club. ‘It is and it isn’t,’ would be the sensible reply. Yes: the group has met continuously each month over 50 years. But no: none of the original members are still in it. There is no single, objective answer to the poker-identity question, since there is no inner, substantive soul to the club that has both remained the same and changed over time.

The same goes, perhaps, for me. I think I have been the same thing, a person, over my life. But if there is no inner, substantive me, then there is no fact to the matter about what my experience will be when ‘I’ press the button. It is just as the observer says: first there was one, and then there were two (with the toggle set to ‘save’), each thinking himself to be the one. There is no fact about what ‘the one’ really experienced, because ‘the one’ wasn’t there to begin with. There was only a complex arrangement of members, analogous to my poker club, thinking of themselves as belonging to the same ‘one’ over time.

Small comfort that is. I went into this problem wondering whether I could survive – only to find out that I am not, and never was! And yet the decision still lies before me: do I – do we? – press the button?

Note: I make no claim to originality in this thought experiment. A very similar sort of question was raised in 1775 by the Scottish philosopher Thomas Reid, in a letter to Lord Kames referencing Joseph Priestley’s materialism: ‘whether when my brain has lost its original structure, and when some hundred years after the same materials are again fabricated so curiously as to become an intelligent being, whether, I say, that being will be me; or, if two or three such beings should be formed out of my brain, whether they will all be me’. I first encountered it, with the Martian setting, in the preface to the essay collection ‘The Mind’s I’ (1981), edited by Douglas Hofstadter and Daniel Dennett. The British philosopher Derek Parfit made much hay out of the idea in his book ‘Reasons and Persons’ (1984). And the podcaster C G P Grey provides an insightful illustration of the problem in his video ‘The Trouble with Transporters’ (2016).

aeon.co
Philosophy of mind Cognition and intelligence Space exploration
1 August 2017
Republish for free
Aeon is not-for-profit
and free for everyone
Make a donation
Get Aeon straight
to your inbox
Join our newsletter
Video/
Making
How sky-high dreams launched one man’s audacious life in homemade rocketry

A Roman Capriccio by Marco Ricci (1676-1730). Courtesy the Morgan Library and Museum

For centuries, all philosophers seem to have done is question and debate. Why do philosophical problems resist solution?