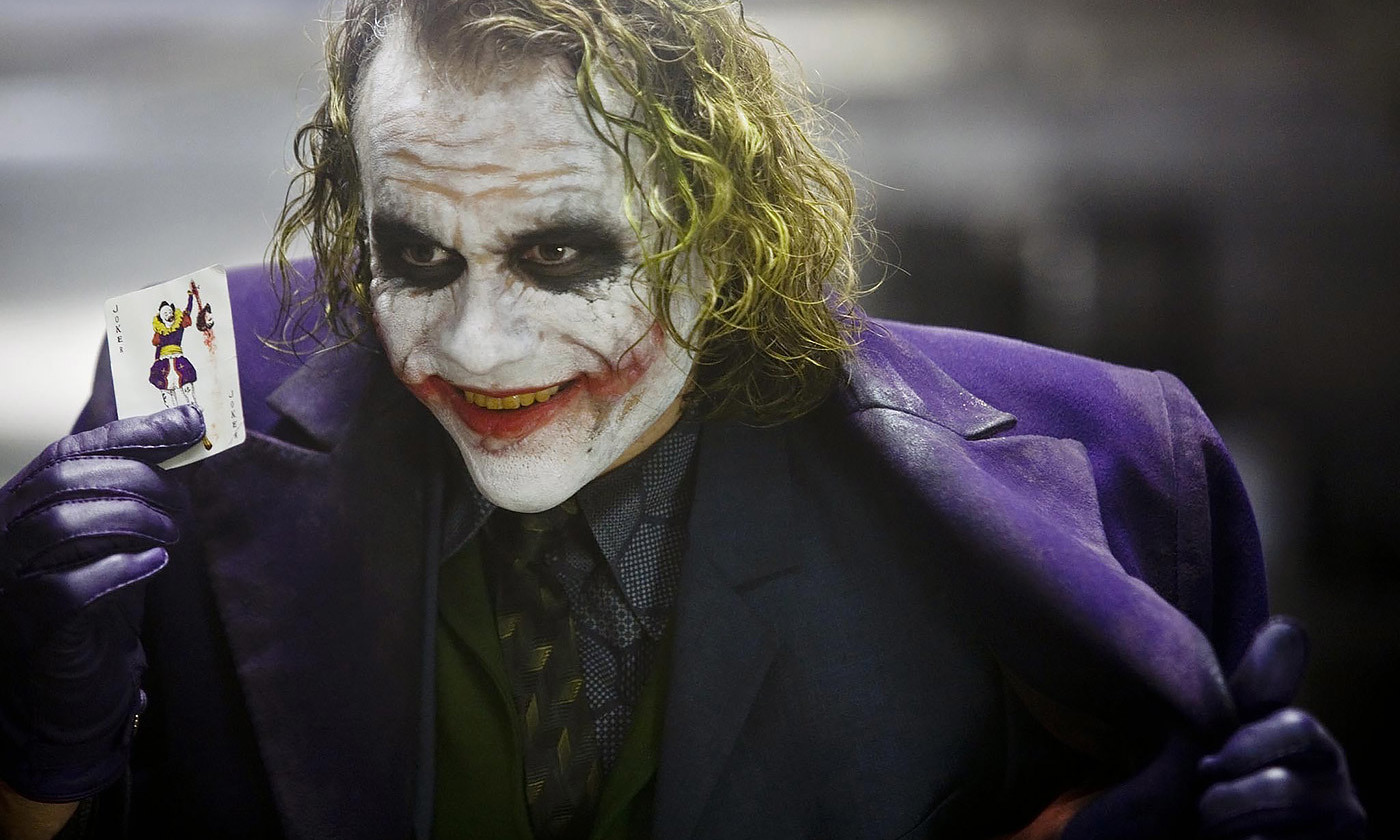 is a PhD candidate and alumni dissertation fellow in the philosophy department at Fordham University in New York City. His work has been published in the Australasian Journal of Philosophy, Episteme and Mind & Language, among others.

In 2009, Heath Ledger posthumously received an Academy Award for his performance as the Joker in Christopher Nolan’s film The Dark Knight (2008). To say that Ledger earned the recognition of his peers is to vastly understate his accomplishment. Ledger’s unflinching and disquieting performance as an anarchic sociopath – ostensibly, he played a comic-book villain, but his performance far transcended the source material – earned near-universal praise from critics and audiences alike. By the time filming wrapped up, Ledger had completed his professional transition from ingénu to serious actor. As his final director, Terry Gilliam, remarked: ‘I think we all thought that this was somebody, without a doubt, who was going to be the greatest actor of his generation.’

During post-production, Ledger, who reportedly suffered from insomnia, accidentally overdosed on sleeping pills and died, aged 28.

In the wake of Ledger’s untimely death, his performance – and the events leading up to it – were voyeuristically scrutinised. His dedication to the craft of acting was well-known, as were rumours of his ill-health during filming. He prepared obsessively for the role of the Joker, isolating himself from public life to ‘galvanise’ the character in his own mind. And he said that his work took its toll on his sleep. So perhaps it’s unsurprising that his performance was mythologised and his cause of death psychologised. To put it cynically: people like a good tragedy.

One particular myth that attached itself to Ledger was that his death was somehow a result of immersing himself in the character of the Joker. The idea is that Ledger’s battle with insomnia was rooted in some sort of existential angst – an angst borne of ‘becoming’ an abhorrent character. Film critics stoked various versions of this narrative. David Denby of The New Yorker wrote: ‘As you’re watching [Ledger], you can’t help wondering … how badly he messed himself up in order to play the role this way. His performance is a heroic, unsettling final act: this young actor looked into the abyss.’ Christopher Orr of The New Republic added: ‘Even without Ledger’s death, this would be a deeply discomfiting performance; as it is, it’s hard not to view it as sign or symptom of the subsequent tragedy.’ And, on the day of Ledger’s death, The New Yorker’s Richard Brody mused: ‘As we remember Ledger, it’s worth recalling the agonies that actors, from amateurs to stars, have to pull from their guts.’

Comments like these seriously misconstrue the nature of character immersion – a misunderstanding that begins with the idea that actors ‘lose themselves’ in character or ‘forget’ who they are. Supposedly, this is especially true of method actors, who are trained to become at ‘one’ with their role.

There’s a grain of truth to this talk, but merely a grain. To see why, consider a theoretical model developed by cognitive scientists Shaun Nichols and Stephen Stich designed to help make sense of the act of pretending. Nichols and Stich invite us to think of our minds as collections of boxes. Each box represents a different type of propositional attitude toward a sentence. For example, if you believe that Bigfoot exists, your Belief Box contains ‘Bigfoot exists’; if you desire that your crush likes you back, your Desire Box contains ‘my crush likes me back’; and so on. Nichols and Stich add a ‘Possible World Box’, which contains things you neither believe nor desire, but simply think. Thus, if you think that grass is blue, your Possible World Box contains ‘grass is blue’; and if you pretend that you are a hermit crab, your Possible World Box contains ‘I am a hermit crab.’

I recently extended this model by looking at situations where character immersion comes into play. When you’re fully immersed in a character, you cognitively attend exclusively to statements your character would endorse. Your attention is fixed exclusively on your Possible World Box, and your Possible World Box contains only the beliefs and desires of your character. For example, if and when Ledger was fully immersed in the character of the Joker, he consciously thought things such as ‘Chaos is beautiful’ or ‘Chance alone is fair,’ and he did not consciously think ‘I am Heath Ledger’ or ‘I am acting on a soundstage.’ In other words, Ledger attended only to his Possible World Box, paying no attention to his Belief and Desire boxes.

That’s the way that method actors ‘lose themselves’ or ‘forget who they are’. They don’t literally forget who they are, since their actual beliefs and desires remain the same. (Put in terms of the model: their Belief and Desire boxes retain their original contents.) However, fully immersed actors ‘forget themselves’ in the sense that they actively ignore facts about who they are, temporarily subordinating their own thoughts and feelings to those of their character. Actors forget their identities like stoners forget the quadratic formula. The information isn’t gone – just temporarily offline.

This way of thinking about character immersion has several advantages: it distinguishes immersion from delusion at the level of cognitive architecture; it countenances the phenomenon of falling out of character; and it explains how preparatory research can facilitate immersion. A similar model can be found in the works of Konstantin Stanislavski, creator of the ‘system’ that ultimately inspired method acting. But the model described here has a particular advantage: it accommodates actors’ talk of ‘getting lost in character’ without taking such talk too literally.

Misplaced fear about ‘staring into the abyss’ belies an oft-forgotten truth about acting: it’s fun. Even the most serious roles can be enacted with childlike joy; it is play, after all. Ledger himself said that portraying the Joker was ‘the most fun I’ve ever had, or probably ever will have, playing a character’. In our eagerness to honour the ‘serious actor’, let us not forget that Ledger, like all truly serious actors, played his part with joy, and graciously invited us to watch.

is a PhD candidate and alumni dissertation fellow in the philosophy department at Fordham University in New York City. His work has been published in the Australasian Journal of Philosophy, Episteme and Mind & Language, among others.

aeon.co
Personality Film and visual culture Dance and theatre
18 April 2019
Republish for free
Aeon is not-for-profit
and free for everyone
Make a donation
Get Aeon straight
to your inbox
Join our newsletter