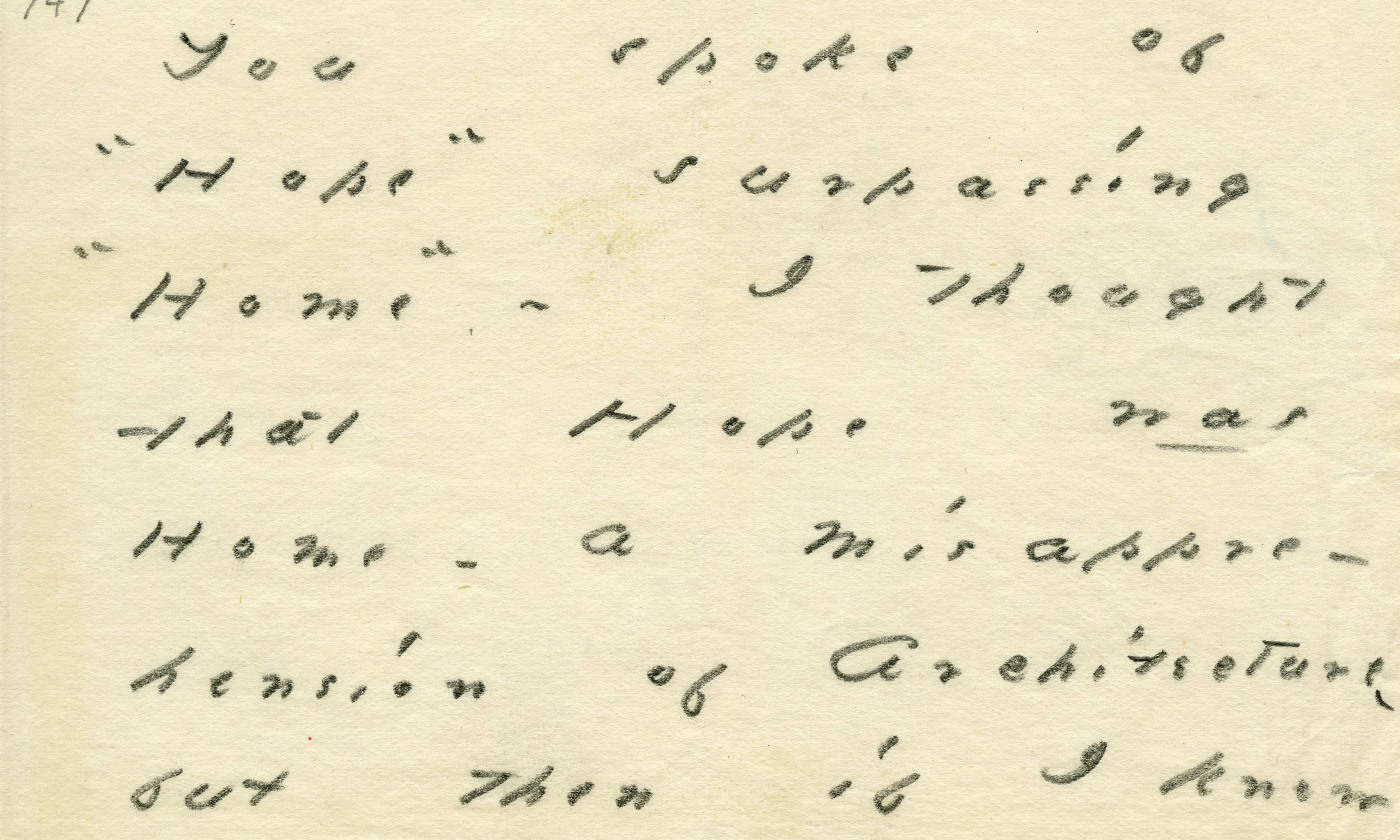 is associate professor of English at Dickinson College in Pennsylvania. She is the author of The Poetics of the Everyday: Creative Repetition in Modern American Verse (2010).

A lot of people love personal letters now that very few people write them. We have publishing initiatives such as Letters in the Mail and The Letters Page, books such as For the Love of Letters (2007) or Signed, Sealed, Delivered (2014), and films such as Her (2013). Meanwhile, the United States Postal Service delivers more junk mail than first-class; rural post offices shutter; Saturday delivery remains under threat; and we send more than 200 billion emails and 15 billion texts a day worldwide.

‘[This] is a book about what we have lost by replacing letters with email,’ writes Simon Garfield at the start of To the Letter (2013). His answer is ‘individuality and authenticity’. I teach a class on letters as a literary and para-literary phenomenon, from the 18th-century aristocrat Lady Mary Wortley Montagu, to Mallory Ortberg, co-founder of the site The Toast. The class invites epistolary nostalgia – then resists it, or studies it. The present fondness for letters tells us what we miss in our current habits of communication. But the history of letters is not exactly reassuring about the ways in which correspondence might redress the lack.

It can be hard to pin down what makes a personal letter, along with what makes for its individuality and authenticity. Connection is the most basic ‘reassurance that I am not floating out there alone in the universe’, as Nina Sankovitch writes in Signed, Sealed, Delivered. A letter links two particular persons, even when its words are handed round and read to others. And while we’re more connected than ever now, our connections can be less specific – we post a lot of ‘personal’ updates to a varied or unknown audience who has no responsibility to respond.

Still, emails and texts do keep us tethered; we won’t lose Sankovitch’s reassurance when the post office shutters. Nor will we lose the importance of writing – the next-most-obvious quality of the personal letter. Some indictments of our digital lives seize on the virtues of in-person, face-to-face interaction – put down the phone and talk – but even Sherry Turkle, author of Reclaiming Conversation (2015), recommends the letter in her earlier book Alone Together (2011). Personal letters have long made the case that writing allows people to grow closer in ways conversation might not. That benefit continues: for example, an article on mental health hotlines in The New Yorker in 2015 notes fuller communication via text exchanges than voice calls.

Other benefits do not, though. Fans of the personal letter are not satisfied with emails or texts because they want more than writing at a distance; they want handwriting at a distance. ‘Basically: it’s all about handwriting,’ John O’Connell writes in For the Love of Letters (2012). Wonderful email correspondences – such as I’m Very Into You (2015) between the novelist Kathy Acker and the writer McKenzie Wark, or between the poet Max Ritvo and the playwright Sarah Ruhl – contradict this claim, but its hyperbole is important. Physicality feeds the letter’s distinct appeal. Words on paper bring something that one person has touched to the touch of another; they metonymically figure the human body by transporting its combination of persistence and perishability.

Words on a screen have no such power. Tributes to the personal letter, therefore, can swell with mortal pathos: Turkle holds her mother’s correspondence ‘as though I hold her heart in my hands’; Sankovitch reads her sister’s letters and touches ‘the very substance of who she was’. Or they can play with sensuality. Garfield likes how letter-writing requires ‘the whole of our hands and not just the tips of our fingers’ – and in the epistolary-tinged sexism of Her, a letter-writer purchases a female helpmeet with just enough body.

It’s worth understanding the origins of what seems like an arbitrary emphasis on material. With the 18th-century rise of the public sphere, as Michael Warner shows in The Letters of the Republic (1992), the published stuff proper to that realm had to be printed – which meant, it had to sever its connection with the human hand. Hand-writing, then, could signal the reverse, a private sphere that worked against – or protected one from – the abstractions of the public. If the latter was (purportedly, anyway) impersonal and disinterested, the former was specific and emotional. Just the place for reflective communication between particular people. Handwriting signalled its distinction.

So did delay. Temporal vagary is the final essential characteristic of the personal letter; with physicality, it sets the personal letter against digital messages. Correspondence presumes reply but not immediately. Punctual chasms allow emotions to clarify, deepen, resonate – Turkle celebrates time for reflection; Sankovitch finds ‘something wonderful about that interval’. The call of personal correspondence is not the Pavlovian, or Fordist, ping of an email or text, demanding immediate attention. Letter-writers are allowed a sensation of power over the narrative of their lives. Letter-writers can insist on their own – wasteful, unpredictable – clock. Just as a letter’s physical presence, then, resists the rationalisations of the public sphere, its temporal idiosyncrasies resist the efficiencies of capitalist production.

Indeed, the history of the personal letter is part of the history of these resistances, ready for contemporary emulation. It’s a feminist history. Letters have often been gendered feminine, just as the private sphere, full of irrational and non-productive sentiment, has for three centuries been seen as female. The editors Frank and Anita Kermode, for example, note in The Oxford Book of Letters (2003) that ‘a great many of the most accomplished letter-writers have been women’. (Though two-thirds of the contents they chose are written by men.) Letter-writing was part of the cultured woman’s accomplishments, one of her tools of seduction and defences against it. Letter-writing was the space for her to develop authority apart from a realm of published authorship. Along the way, letter-writing was a way for her to develop values that were not public ones – not a matter of capitalist worth or liberal politics.

Except that the private, epistolary sphere – from the start, and especially in the United States – worked more to complement than undermine its public, un-epistolary counterpart. The private sphere always had an economic and political role. Letters did, too. Consider the rhetoric of the antebellum United States, in which the ‘intimacy and authenticity’ of personal letters were used both to further and to criticise abolition. Letters contribute to the ‘intimate public sphere’ of hybrid, feminised, semi-political spaces. (The TinyLetter email newsletter marks the latest instance of this phenomenon.)

Much of what seems troublesome in digital culture today – the necessity of ‘personal brands’; the ubiquity of a politics of feeling; the transformation of sociality into unpaid labour; the unmarked blending of business contacts and ‘friends’ – much of this exaggerates letterish trends that for generations have worked to mix the private and the public while seeming to maintain the border between them. Scholars from several disciplines have shown how neoliberal markets and politics makes the ‘feminine’ a general (if still execrated) state: contingent, affective, unremunerated practice is becoming the basic condition of work and citizenship. Correspondence is part of this. Letters have faded because epistolarity persists.

If that’s the case, it’s hard to trust in going ‘back’ to the personal letter – that is, hard to trust in writing by hand at a variable delay to a specific other person before waiting for their reply. We need, absolutely, to understand and value a heritage of correspondence; and we should preserve and guarantee a robust public infrastructure for private exchange. But we also need to understand how the ‘personal’ has always been a category ripe for co-option by the very forces it is meant to mitigate and assuage. Perhaps the most useful lesson of the personal letter is in the way it shifts and changes, proving that what we call intimacy, individuality or authenticity does not transcend time – or remain locked in history. The ‘personal’ is what its genres do. Those genres, letters included, continue.

is associate professor of English at Dickinson College in Pennsylvania. She is the author of The Poetics of the Everyday: Creative Repetition in Modern American Verse (2010).

aeon.co
Subcultures Information and communication History of ideas
12 April 2017
Republish for free
Aeon is not-for-profit
and free for everyone
Make a donation
Get Aeon straight
to your inbox
Join our newsletter
Video/
Personality
Meet the British bouncer in LA on an expired visa who has no time for immigrants

Humans need closeness and belonging but any society that closes its gates is doomed to atrophy. How do we stay open?