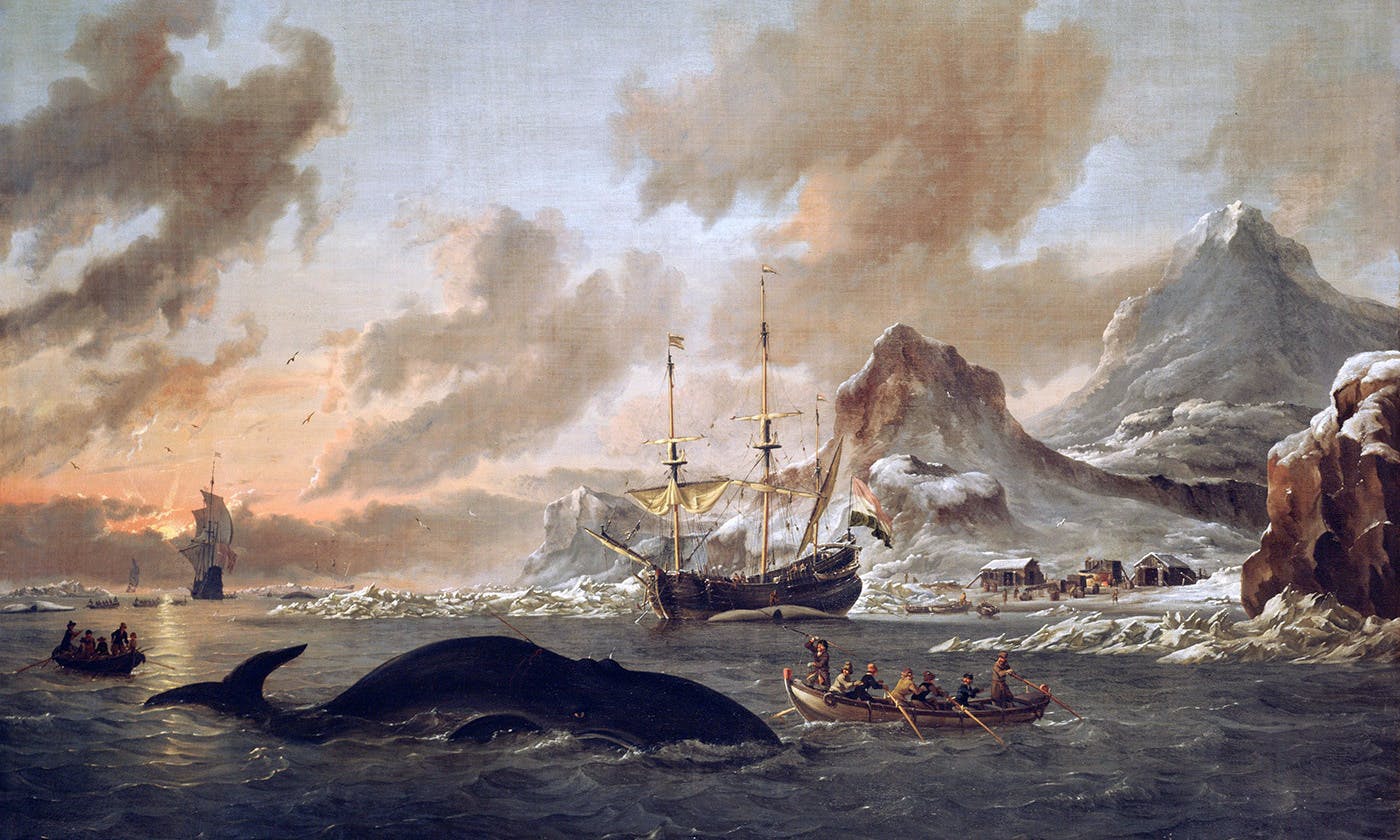 is assistant professor of English at Young Harris College in Georgia.

In the 45 years since the Apollo 17 astronauts placed the last boot prints on the Moon, Mars has loomed as the next target for human exploration of the solar system. NASA, SpaceX and other spacefaring enterprises have repeatedly declared their intentions to go there in the coming years and decades. A crewed mission to Mars will demand expertise from a wide range of disciplines, including physics, engineering, psychology and geology. Less obvious, it will also require us to scrutinise any antecedents that could help us to prepare for one of the most difficult undertakings in history.

Perhaps nothing better prefigures this most daunting and ambitious of quests than the whaling industry of the 18th and 19th centuries. The South Seas fishery hit its peak between roughly 1820 and 1860. Powered by an insatiable desire for whale oil and other whale-based commodities such as umbrellas, corsets and perfume, the industry was at the forefront of the American, British and French economies until petroleum was discovered mid-century. Whaling developed its own maritime practices, its own culture, even its own language and art forms.

The parallels between the whaling industry and deep human spaceflight are striking. Voyages to the South Seas usually lasted between two and four years, mirroring almost exactly the timeframes associated with a roundtrip journey to Mars. Whalers worked in confined conditions aboard their floating factories, often going months at a time without setting foot on land, prefiguring the cramped space capsules being considered for Mars missions.

Finally, whalers and their Mars-bound counterparts share a place in the great pantheon of human exploration – individuals who accepted steep risks in the name of what Ishmael, the most famous fictional whaler in Herman Melville’s Moby-Dick (1851), calls ‘honour and glory’. In that way, whaling voyages more closely parallel the anticipated Mars missions than other superficially similar confined endeavours, such as serving on a submarine crew or working on a remote oil platform.

One important lesson from the South Seas whaling industry is the need to prepare for a paradoxical combination of routine tedium and moments of exceptional danger. The art of scrimshaw arose to keep shipmates occupied during the long hours of waiting for a whale sighting. But when action arrived, killing sperm whales for a living was one of the deadliest professions of the 1800s. Consider this terrifying passage from an article in Harper’s Magazine in 1854:

The harpooner, especially, is liable to be entangled in coils of the line as it runs out after a whale is struck, and to be then dragged beneath the surface … Yet more appalling is the calamity which occasionally befalls an entire crew, when the struck whale is diving perpendicularly. It has happened repeatedly on such an occasion, that the line has whirled round the loggerhead, or other fixture of the beat; and that in the twinkling of an eye, almost ere a prayer or ejaculation could be uttered, the boat, crew, and all, have been dragged down into the depths of ocean!

In an extraordinary example of whaling’s dangers, a sperm whale attacked and sunk the Essex whaleship commanded by Captain George Pollard, Jr of Nantucket, leaving the crew stuck in three small whaling boats in one of the most remote stretches of ocean. Through quick thinking and perseverance, many of the Essex’s crewmembers made it to safety. Much like the astronauts of the near-catastrophic Apollo 13 mission, these whalers faced an unexpected calamity, and overcame it. Space agencies would be wise to ensure that individuals chosen to go to Mars have intense training in problemsolving without assistance from people back on Earth.

The Essex crew survived in part because of their high level of professionalism and camaraderie. Even in the direst of circumstances, they (mostly) maintained order. As Owen Chase, the first mate of the Essex, described in 1821: ‘We agreed to keep together, in our boats, as nearly as possible to afford assistance in cases of accident, and to render our reflections less melancholy by each other’s presence.’

Should a comparable calamity come to pass aboard a Mars spaceship, crewmembers should follow Chase’s example. Astronauts are often praised for their individualism and love of adventure. For Mars missions, those qualities will need to be tempered with compassion and patience.

Whalers often came from disparate cultures, stuck together for years with limited food, sanitation and entertainment. Nevertheless, they formed strong bonds with their co-workers. Whaling-ship officers carefully cultivated a sense of shared purpose and reward. Crewmen were tied together, rowed together, and died together. As Hester Blum, one of the foremost scholars of whaling culture, writes in The View from the Masthead (2008): ‘[T]he presence of a system, a transparent set of rules for conduct, was presumed to help prevent seamen from becoming overwhelmed by the natural environment and its frequently fatal indifference to the presence of humans.’

NASA and other spacefaring enterprises must develop comparable systems for Mars-bound vessels. What is perhaps most important is that those systems provide astronauts with dedicated alone time. Whalers achieved this in part by rotating shifts atop the masthead or crow’s nest of the ship. Manning the masthead gave whalers a break from their comrades, while also serving the purposes of the voyage. Mars mission-planners would do well to find analogous practices for their astronauts, to keep action-oriented individuals occupied yet not always socially engaged during their immense stretches of downtime.

One tactic employed by whalers was cerebral observation of the natural world. They became attuned to the weather, the condition of the water, and the behaviour of the whales. Whalers also actively consulted books and wrote their own narratives. According to Blum: ‘Mariners at rest spent time mending clothing, overhauling gear damaged by use or weather, writing letters home, reading, and telling stories or yarns.’

It’s safe to say that virtually all of world literature will be available to future Mars travellers in digital form. But mission planners might take further inspiration from whalers, and encourage astronauts to write about their experiences while on the mission. Maintaining real-time accounts would provide individual records of one of humanity’s most incredible undertakings. It would also fill low-intensity gaps during the long flights to Mars and back, and bolster the sense of accomplishment.

For whalers, the ocean voyages were not just a means of livelihood but a key to their identities. As Ishmael boasts in Moby-Dick: ‘Our grand master is still to be named; for like royal kings of old times, [whalers] find the head-waters of our fraternity in nothing short of the gods themselves.’ Large segments of the public were likewise fascinated by the process that brought whale-oil and its wonderful light to their homes. One can imagine that interest in the first Mars-bound voyages will surpass that of whaling, perhaps to a level hitherto unseen by human beings.

This time around, hopefully, the motivation will lie more with human glory and less with human profit, but much of the underlying spirit will remain the same. Through determination, daring and an intense focus on a shared goal, the first human beings will step on the Red Planet and join Ishmael’s exclusive fraternity.