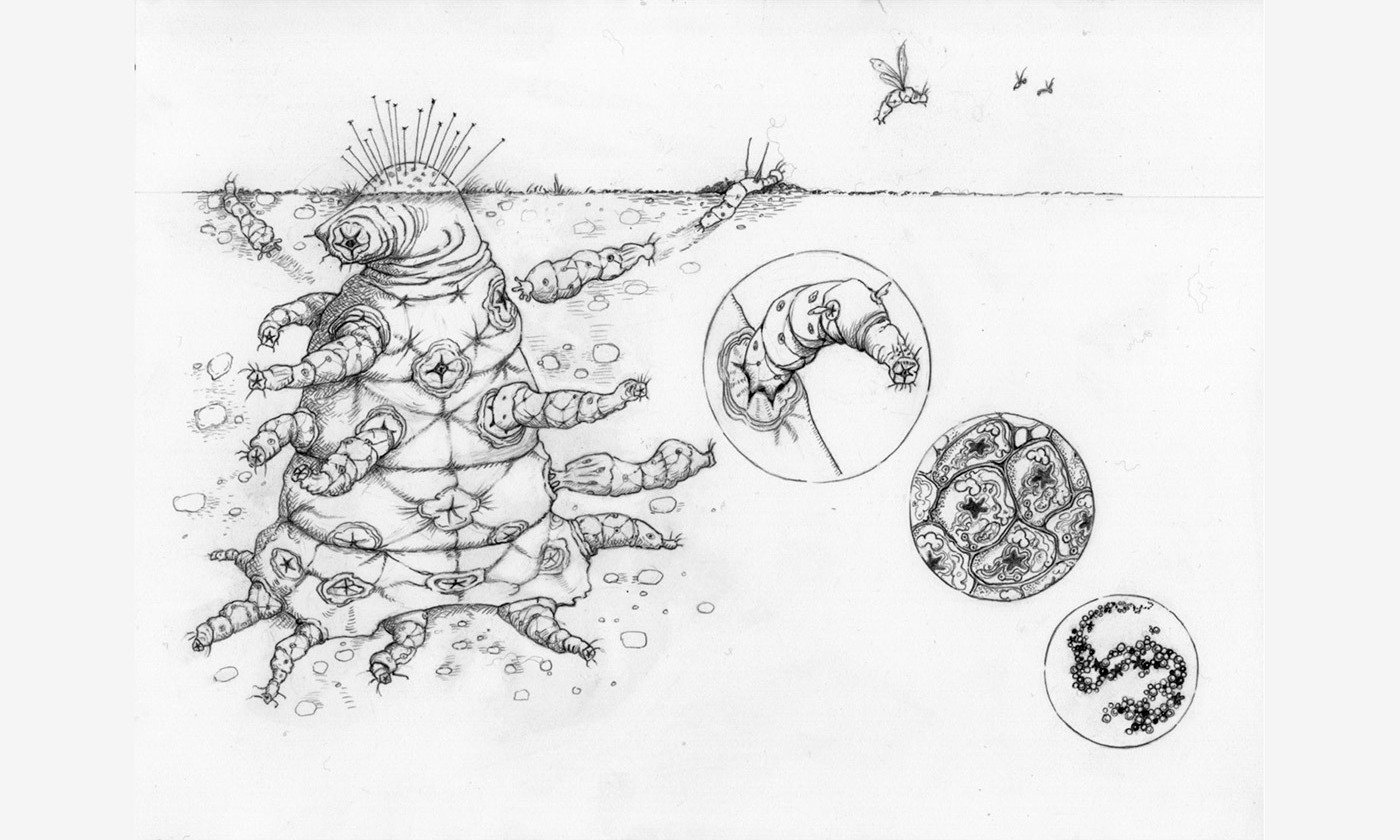 is a postgraduate student in zoology at the University of Oxford.

What would convince you that aliens existed? The question came up recently at a conference on astrobiology, held at Stanford University in California. Several ideas were tossed around – unusual gases in a planet’s atmosphere, strange heat gradients on its surface. But none felt persuasive. Finally, one scientist offered the solution: a photograph. There was some laughter and a murmur of approval from the audience of researchers: yes, a photo of an alien would be convincing evidence, the holy grail of proof that we’re not alone.

But why would a picture be so convincing? What is it that we’d see that would tell us we weren’t just looking at another pile of rocks? An alien on a planet orbiting a distant star would be wildly exotic, perhaps unimaginably so. What, then, would give it away as life? The answer is relevant to our search for extraterrestrials, and what we might expect to find.

Astrobiology – the study of life on other planets – has grown from a fringe sub-discipline of biology, chemistry and astronomy to a leading interdisciplinary field, attracting researchers from top institutions across the globe, and large sums of money from both NASA and private funders. But what exactly is it that astrobiologists are looking for? How will we know when it’s time to pop the Champagne?

One thing that sets life apart from nonlife is its apparent design. Living things, from the simplest bacteria to the great redwoods, have vast numbers of intricate parts working together to make the organism function. Think of your hands, heart, spleen, mitochondria, cilia, neurons, toenails – all collaborating in synchrony to help you navigate, eat, think and survive. The most beautiful natural rock formations lack even a tiny fraction of the myriad parts of a single bacterial cell that coordinate to help it divide and reproduce.

And living things, unlike dirt and wind, appear to be trying to do things – eat, grow, survive, reproduce. If you’ve ever tried to squish a resilient bug, you know that it doesn’t require a complex mind for an organism to appear to want to survive. Or for a squirrel to ‘want’ to jump from one branch to the next. Or for a plant to ‘try’ to reach towards the Sun and soak up nutrients from the soil. Not only do living things have many intricate parts, but all of those parts have the same, common purpose ­– survival and reproduction. This combination of complex design and apparent purpose, also known as adaptedness, defines life. When we look at that photo of an alien, it’s exactly this adaptedness that would make us go: ‘Aha!’ We would see, clearly, the difference between a disappointing pile of rocks and an exciting alien – design. This is good news, because there’s only one way to get such design: natural selection.

Natural selection occurs whenever you have a collection of things (cells, replicators, birds, an imaginary species we’ll call ‘Glipgloops’) that have three properties: variation, heredity and differential success. For example, some of the Glipgloops we posited have longer eyestalks than others (variation). Long-eyestalked Glipgloops have long-eyestalked babies (inheritance of the variation). And Glipgloops with long eyestalks can see out of their methane holes better and therefore have more babies (differential success linked to that variation). The result is that, over time, Glipgloops evolve to have elongated eyestalks.

This is the process by which the apparent design in nature is generated: in every generation, at every instant, individuals with traits linked to better reproduction are being ‘selected’. As a result, over time, populations consist of individuals who appear designed for the purpose of reproducing. It’s exactly because the selection criterion is always the same that design can develop. Imagine a car that was constructed using a different blueprint at every step – well, you likely wouldn’t end up with a car. It’s natural selection’s unwavering mantra – the contribution of genes to future generations – that allows for design to appear without a designer.

In fact, the selection criterion is so consistent, that an organism cannot be designed for anything other than contributing genes to future generations. This is why we don’t get organisms who sacrifice for the good of their species. In general, organisms are selfish – reproducing yourself at the expense of others is a great way to pass on genes. We do sometimes see sacrifice and cooperation in nature – but only when the benefits of cooperation come back to you, or the sacrifice benefits relatives. Relatives share genes, so a bee can sacrifice for the queen (its mother), if it means she’ll produce 100 more sisters, each carrying half the bee’s genes. The calculus of which traits lead to more genes, and exactly when and how much to sacrifice, is precise and rigid. This is why evolutionary biologists can make mathematical models that correctly predict how many helpers a bird should allow at her nest, and how often wasps should cannibalise their siblings. But this algorithmic rigidity of natural selection also comes in handy for the astrobiologist.

Are there exceptions? We can’t get complex life, even something as simple as a bacterium, without natural selection. Even a postorganic, computer-based alien would ultimately be the product of a product of natural selection. But let’s consider a borderline case. Imagine a collection of replicating molecules, like tiny naked genes, on an alien planet. If these replicators made copies of themselves (inheritance), but replicated perfectly every time (no variation or differential success), you wouldn’t get natural selection.

Would this be life? Maybe, but it wouldn’t be very exciting. For one, without variation, the molecules can never change, or become more adapted, or evolve into anything more interesting or complex. Finding bacteria or bears on a distant planet would suggest that the universe might be teeming with life of all shapes and sizes. These replicators wouldn’t suggest anything. Even more problematic, their existence would likely be fleeting – without natural selection, they wouldn’t be able to cope with changes on their planet, and so would disappear before we found them.

The argument from natural selection is robust, even at the boundaries. This frees us up to use the same evolutionary tools we use on Earth to make predictions about life elsewhere.

Previous work in astrobiology has extrapolated from what’s happened on Earth, potentially limiting our vision to certain special features, such as DNA or carbon-based life, that won’t hold on other planets. Natural selection, on the other hand, is universal. It doesn’t depend on DNA (remember, Charles Darwin knew nothing of genes) or carbon chemistry or the presence of water. It’s incredibly simple – it just requires a few ingredients – and it’s the only way to generate life.

A mental image of that prized photo, showing entities apparently designed to fit their surroundings, is beginning to form. We can’t say whether the grainy picture of the alien will have eyes, or limbs, or be green. That’s not the kind of prediction good evolutionary theory can make. But natural selection tells us that its forms, goals and evolutionary pathways are constrained.

One example posed by our team in the sketch above is what we playfully call ‘the octomite’ – a conglomerate of once-separate entities now working together to survive, reproduce and evolve. How would we recognise an alien? It would include a hierarchy of entities, with the interests of each lower level aligned with components in levels above. The photo we envision would show division of labour, with various parts specialising in various tasks in a mutually dependent way.

This work of incorporating evolutionary theory into our astrobiological toolkit is only just beginning. What else can Darwin tell us about aliens? Presumably quite a lot. The photo, if and when it comes, will be something entirely exotic to the naked eye. But to the student of evolutionary biology, it might look surprisingly familiar.

is a postgraduate student in zoology at the University of Oxford.

aeon.co
Biology Evolution Astronomy
10 October 2018
Republish for free
Aeon is not-for-profit
and free for everyone
Make a donation
Get Aeon straight
to your inbox
Join our newsletter

Essay/
Sports and games
All stars

Is a great team more than the sum of its players? Complexity science reveals the role of strategy, synergy, swarming and more

Essay/
Space exploration
Do we send the goo?

The ability to stir new life into being, all across the Universe, compels us to ask why life matters in the first place

Video/
Genetics
If trauma can be passed down, could new therapies blunt the transgenerational impact?